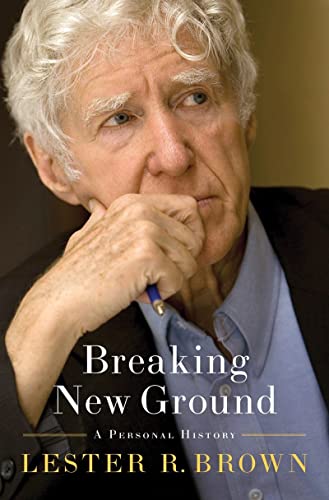 “Breaking New Ground can inform and motivate entrepreneurs who want to change the world.”

Born on a farm into a farming family, he extended his reach beyond helping on his family farm to farming his own land, and then beyond food to the resources fundamental to sustaining life, Lester Brown's life trajectory has been one of "chunking up" to expand his horizons, and extend his concerns:

• Working on his father's farm in high school, then embarking on his own tomato farming venture with his brother and running it for some eight years,
• Studying agricultural science at Rutgers,
• Traveling to India to be a farming advisor at age 22,
• Working as an economist in the U.S. Department of Agriculture
• Creating and leading a highly research think tank concerning global issues through which he authored countless influential books, in the process interacting with and influencing the world's movers and shakers.

One way of framing the impact of Lester Brown's life work is that he and James Cameron’s Avatar, inspired his advocacy for more progressive agricultural policies in India in the 1960s and then China in the 1990s contributed meaningfully to those two countries’ great economic advances.

The author takes his Breaking New Ground title from his discovery of "a capacity for breaking new ground and thinking about and projecting the future . . . within an interdisciplinary analytical framework, incorporating agronomy, economics and demography."
His life work reflects the intersection of his personal experiential affinity for the land, and his broad interests in the relationship "between food and people and the world." He has deep "attachment to the land…Even now whenever I return to Stow Creek for family visits, driving through the countryside with its fertile sandy lump fields, patch's of woodland and creeks, I enjoy a sense of peacefulness and of being grounded."
Concerning his expanding horizons, Lester Brown writes “Although I had launched a promising farm operation during the 1950s with my brother Carl, by the summer of 1958 my mind was already turning to some of the larger issues facing humanity. The months spent living in the villages of India when I was 22 certainly reinforced this interest. It also helps explain my early attention to world population growth, soil erosion and hunger. Once you understand the effect of soil erosion on the sustainability of agriculture, it is a short and mental step to see how environmental trends more broadly threaten the sustainability of the global economy, and indeed, of civilization itself.”

His working style reflects a "systematic approach, distinctive personal style," that involves breaking others' rules, crossing boundaries, taking the initiative. Tellingly, he observes that early on he recognized "that while I excelled at things that I wanted to do, I did poorly in things I did not want to do!" Among the highlights of his work are inspiring James Cameron’s Avatar, advancing Plan B his manifesto to reverse the effect of mounting earth’s ecosystem,” and stimulating restructuring of both China’s and India’s agricultural policy.

The Lester Brown Success Formula encompasses (1) play to your strength, (2) pursue broad interests, (3) read widely, (4) own and pursue your passions, (5) learn from your place encounters, (6) work hard, (7) relentlessly communicate your message, (8) live simply and efficiently, and (9) exercise regularly. Concerning these latter two points, Lester Brown lived in a condo within a mile of his office, wearing “the same style—light-blue Oxford weave shirts everyday . . . with dark blue shorts in the summer, and navy blue corduroy trousers in the winter. No time wasted in selecting colors. And, when necessary, I can wear the bow tie that I carry in my suit pocket.”

Acknowledging that his perspective concerning a life that "has been largely a string of successes," reflects his "psychic comfort," his story chronicles "a life that's taken me to the earth's four corners, letting me see the world as few have been able to do. It has enabled me both to live in villages on the far side of the planet, and to dine with heads of state." In the early 1960s he commenced evolving “the concept of environmentally sustainable development,” because he began “to see a troubling relationship emerging between growing human demands and the earth’s natural systems—including forests, grasslands, fisheries an croplands—in their carrying capacities.” Reflecting on his life work he observes that his principle legacy is “helping to develop the concept of sustainable development . . . closely related to this is systemic thinking and analysis.”

The work of global environmental thought leader, Lester Brown is testimony to the proposition that one person can make a profound difference.

Concluding Breaking New Ground: A Personal History, he proclaims “The yardstick by which I judge myself is…whether we are reversing the trends that are undermining our future. Are we making the transition from fossil fuels to wind, solar, and geothermal energy fast enough to present climate change from spiraling out of control? Are we reforesting the earth, reducing pollution and stabilizing world population?”

Breaking New Ground can inform and motivate entrepreneurs who want to change the world.