Brayden Speaks Up: How One Boy Inspired the Nation 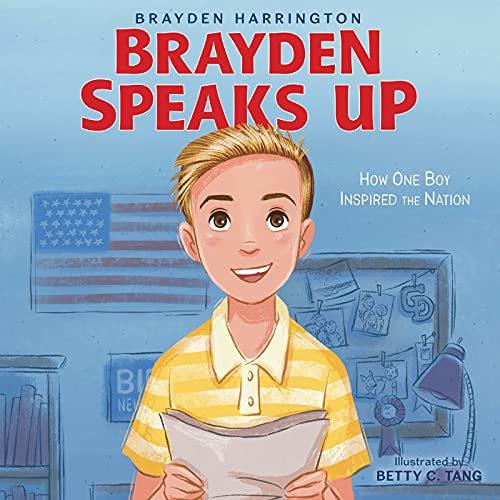 Brayden Speaks Up: How One Boy Inspired the Nation by Brayden Harrington is a story of perseverance, hope and triumph—a firsthand account told in third person—through the voice of a boy whose words get caught in his mouth. His doctor calls it a stutter. His mother says, “You have bumpy speech . . . And that’s okay!” Ultimately, Brayden comes to see that his biggest challenge is his greatest gift.

The story begins with a poignant dedication, “To all the children that are going through something difficult. Your imperfections are your gifts.” The story ends with another note of inspiration from Brayden, “I hope other kids reading this won’t feel embarrassed or ashamed if they stutter.” And in between Brayden tells his story including how he got to meet Joe Biden, and how that meeting helped him feel different about his stutter.

Brayden is introduced as a boy who likes to talk—to his family and best friends and his dog Caitin. But soon the reader sees that sometimes how he talked caused him embarrassment, like at school where some kids laughed at him while others stuck up for him. “Sometimes people didn’t understand why Brayden’s speech was bumpy.” It also becomes apparent that, “when Brayden felt pressure, his speech got bumpier. Like the time his teacher announced that everyone in his grade had to memorize the Gettysburg Address.”  When facing this challenge, Brayden practiced and practiced, and eventually he did a good job.

However, Brayden really wanted to know someone who also had bumpy speech. He finally does so when he meets former vice president Joe Biden. Mr. Biden was running for president, and Brayden and his dad went to hear him give a speech in Brayden’s town. When Mr. Biden met Brayden he said, “When I was your age, I had bumpy speech, too.” Brayden couldn’t believe that the person he met who also stuttered might be the next president of the United States! Mr. Biden was so supportive, “My bumpy speech didn’t stop me. Nothing should stop you.” And that gave Brayden hope.

New York Times bestselling illustrator Betty Tang’s digital illustrations are super expressive, capturing the range of Brayden’s emotional experiences from fear to great joy—and making them even more accessible to the reader through her playful, colorful style. This is exemplified when a very big thing happened to Brayden. Mr. Biden’s team asked Brayden to talk on TV at the Democratic National Convention in front of millions of people! Brayden agreed but was super nervous!

On the day of the event, Brayden was struck with a bad case of the what-ifs: “What if my speech is so bumpy I can’t finish?” “What if everyone laughs at me?” “What if I let everyone down?” He cried. He was so scared. “But then Brayden thought about the other kids like him—kids with bumpy speech. By going on TV, maybe he could give them hope. The way Joe Biden had done for him.”

With tons of support from his family, Brayden did it! Including telling the TV audience about first meeting Joe Biden, “He told me that we were members of the same [Bumpy Speech] club. We s-s-s-s-s- . . . S-s-s-s-s . . . We stutter!” and adding, “We all want the world to feel better. We need the world to feel better.” Brayden stuttered, but he did not stop. “He showed other kids with bumpy speech that it’s important to speak up. That their voices need to be heard. In sharing his story with the world, Brayden realized his stutter was one of his greatest strengths.” And then when Joe Biden was elected president, he asked Brayden to join the celebration of his inauguration!!

Brayden Speaks Up: How One Boy Inspired the Nation pairs well with another recent book about a boy who stutters I Talk Like a River (by Jordan Scott and Sydney Smith, Neal Porter Books). Together they put the spotlight on how we all speak differently, and the importance of making room for these differences. The backmatter in Brayden Speaks Up includes a note to children who stutter, “You are not alone. No one speaks perfectly.” There are also helpful notes of guidance and resources for parents and teachers of children who stutter.

In the end, Brayden is just a normal kid. He enjoys his friends and family, baseball and basketball, video games, and his dog Caitin. He has bumpy speech—and that’s okay. But he does not let his stutter define him. “I look at stuttering as my gift.” He uses his gift to celebrate who he is, and he encourages everyone else to do the same. “So don’t be scared to speak up, speak out, and use your voice. You are amazing just the way you are!” The reader is left knowing that the world will be hearing more from Brayden, who with boosted confidence, “couldn’t wait to continue speaking up. He still had so much to say.”