The Boy with the Cuckoo-Clock Heart (Vintage Contemporaries) 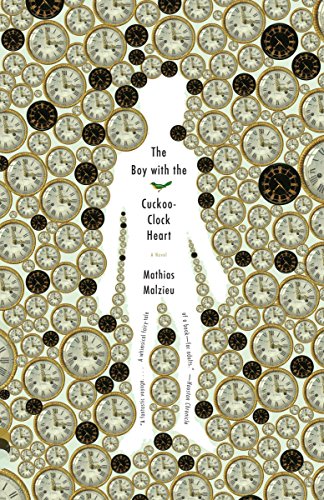 The Boy With the Cuckoo-Clock Heart has more metaphors than a million-piece mega-puzzle that artfully fits together as an exquisite literary masterpiece. On the “coldest day on earth” the narrator and soon to be love-stricken young “hero,” Little Jack, describes the snow-covered city as, “The trees stretch their arms, like fat fairies in white nightshirts yawning at the moon, as they watch the carriages sliding over the cobblestone ice rink.”

Part fractured adult fairy-tale, 19th century romance, a young man’s coming of age, and a mother’s misguided attempt to protect her son from the painful reality of love’s slings and arrows, this delightful story is told with wit, humor, and insight. Told in the first person by Little Jack, who believes that he cannot survive without the cuckoo clock that his adopted mother implanted in his chest right after his birth, we are privileged to follow his tentative footsteps from Scotland to France, as he searches for Miss Acacia, who captured his heart at the age of 10. As he matures and befriends a clockmaker/illusionist named Miéliès, his actions become fraught with danger and possibility.

This book gives no airs about its contents and states up front that it is all about love and suffering, but even though the reader has a sense of what’s coming, the prose, plot, and telling of the tale are a fresh as the first drops of water on one’s tongue after days of thirst. Mr. Malzieu has taken the obvious and turned it on its head. With a mixture of images that remind one of a Tim Burton film, he has painted an optimistic streak through every character, in spite of their circumstances or challenges. Jack could clearly be speaking about himself as much as his friend Miéliès when he states, “My conjurer-clockmaker has a wry outlook even when he’s drowning in sorrow.”

Though it may sound simplistic The Boy With the Cuckoo-Clock Heart, which was first published in French, insightfully portrays the underpinnings of love, desire, and fear and the lengths to which we can delude ourselves into believing what we wish to believe in order to capture the dream we have created. The author has turned back the clock on the power of love and done so with vigor, grace and pizazz.