Borderlines: The Edges of US Capitalism, Immigration, And Democracy 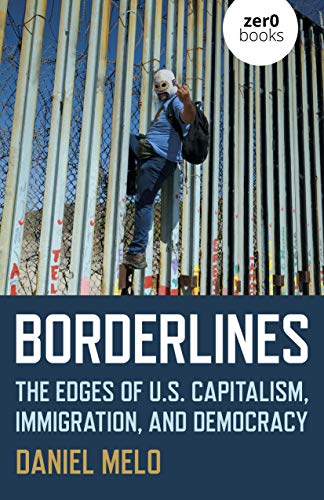 “What Melo does well is to bring into light the human factor at play behind the immigration lures and the need to reform a broken system. Despite closing with a positive stance, Melo warns about the obstacles on the path to immigration reform.”

In Borderlines, Edges of US Capitalism, Immigration, and Democracy, Daniel Melo attempts to convince the reader that all immigration problems stem from capitalism. A reader who already shares Melo’s political point of view will agree, while those who sit at the other end of the ideological spectrum will find plenty of reasons to dismantle his arguments. In the middle, readers without an ideological lens will find weak arguments when Melo tries to support his main idea: “pervasive need for cheap labor within the capitalist system largely dictates the need for control over immigrant rights and immigration flows.”

An ambitious title sets this brief nonfiction volume up for fervent discussion. It prepares the reader for a treatise. Fortunately, Melo uses less than a hundred pages to expand and discuss the intersection between US capitalism, immigration, and democracy.

Some arguments hold. For instance, it is undeniable that within the US, there’s a pervasive system that feeds and controls cheap labor to sustain the status quo. Race and xenophobia do play an important role in the shaping immigration policy. In Melo’s words, “Despite the US holding itself out as a model democracy, what emerges from the historical record is not only racial and xenophobic thinking in immigration policy, but also how it has worked in service of both money and power.”

Another of Melo’s strong arguments is that the criminalization of immigrants has empowered a for-profit prison industrial complex, and that “it is inevitable that the institution extends its reach beyond migrant bodies and communities.” That’s true.  He successfully breaks down the immigration issue in all its components: the role of ICE, the question of personhood and legal immigration, the bureaucratic backlog, the biased and racist immigration judges whose decisions control the lives of thousands of immigrants, the unfairness of a contradictory system that both profits from immigrants while treating us as less than human.

However, some of the author’s supporting arguments do not land as fact, at most as mere opinions. Therefore, these arguments are deniable by those who sit in the opposing ideology, or debatable by those who do not buy into ideological discussions.

For instance, Melo points at imperialism as the bait for immigration. Immigration into the US responds to myriad factors, including, but not exclusively, the false promises and lures of capitalism. It is worth noting here that the US didn’t build its economy on immigration, but on stolen lives from Africa. Additionally, there are capitalist countries that cannot attract immigrants. New Zealand for example, a country without land borders, did not build its economy on immigration. Of course, all these facts are out of Borderlines’ context, but that’s where the weakness of the book is revealed, in that it is opened for fact checking, facts that reside outside ideological lines.

Another inconsistency is blaming US for all the wrongs in Latin America. There is nothing more imperialistic than believing the US alone to be the cause of all wrongs in the countries from which most immigrants to the US come from. US alone has not destroyed the economies of an entire continent that is plagued since inception with corruption and nepotism. Some countries self-inflict pain and destroy their own economies, even after declaring the US as an enemy and placing restrictions on how the US could influence their policies and decisions.

In Chapter 9, Migrant Criminalization, it is evident that the problem continues to be greed not capitalism per se. Greed is non-ideological and in fact happens in countries with communist or socialist governments. Greed is at the base of human exploitation whether a country allows a prison system to work as slave warehouses or resells in the black market the food it promised its citizens for free.

What Melo does well is to bring into light the human factor at play behind the immigration lures and the need to reform a broken system. Despite closing with a positive stance, Melo warns about the obstacles on the path to immigration reform.