The Book of Unknown Americans: A novel 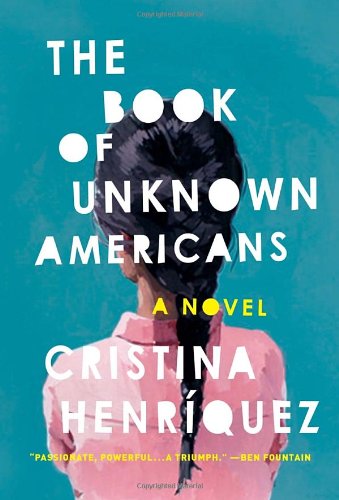 The Book of Unknown Americans by Cristina Henriquez is a moving novel about the experiences of Latin American immigrants in the United States.

The novel consists entirely of first-person narratives, mostly alternating between two of the main characters, Alma and Mayor, and interspersed with testimonials by minor characters. While the stories are poignant and engaging, the writing is often stilted and formulaic.

The novel revolves around the inhabitants, all Latin American immigrants, of an apartment building in Delaware. The two main families of the tale are new immigrants from Mexico, Arturo and Alma Rivera and their impaired daughter Maribel, and the Panamanians Rafael and Celia Toro and their sons Enrique and Mayor, who have lived in the United States for many years and become citizens. The Riveras and Toros become friends, and Maribel and Mayor fall in love.

In an honest and straightforward manner, The Book of Unknown Americans illustrates the numerous hardships that immigrants endure. For instance, the Riveras move to the U.S. so that their daughter can attend a school for children with special needs. As a result Arturo must leave his job in Mexico running his own construction business and is reduced to working on a mushroom farm in which he stands in the dark all day, without a break, pulling mushrooms.

Since neither he nor Alma speaks English, the Riveras have many humiliating and confusing experiences navigating seemingly simple tasks like grocery shopping and taking the bus. Arturo’s ability to remain in the U.S. relies on his maintaining his brutal and precarious job in 2008 during an economic depression. The novel strongly delineates how painful it is to leave family and friends and what is familiar for an often harsh, uncaring, unfamiliar environment.

Cristina Henriquez portrays, through heartfelt scenarios, how language barriers and cultural differences and misunderstandings can make life difficult for new immigrants. When shopping for food for the first time the Riveras buy overpriced processed foods from a gas station since they don’t know where to shop, and then don’t understand that they haven’t given the cashier enough money to pay for their goods.

When taking an English class at the local community center, Alma Rivera observes the differences between English and her native Spanish: “English was such a dense, tight language. So many hard letters, like miniature walls. Not open with vowels the way Spanish was. Our throats open, our mouths open, our hearts open. In English, the sounds were closed.” Through Alma, Henriquez illuminates how the nuances of language and expression become magnified and take on great importance in a new and unfamiliar culture.

In The Book of Unknown Americans Henriquez attempts to give voices to her uprooted, displaced characters.  But that is precisely what she does least effectively. The narrators, especially Alma and Mayor, sound very much alike. Mayor does not talk like a teenager and Alma is far too articulate and even poetic given that she speaks no English and isn’t that well educated in her native language. When the Riveras arrive in Delaware Alma lyrically describes the evening sky: “It was just after sunset and darkness bled in from the outer reaches of the sky.”

In a later scene, when the Riveras go ice skating Alma again provides far too eloquent a description than is credible: “Most of the ice on the ground had melted, although the tree branches were still lined with it, bowing under the weight. In the sunlight, telephone wires looked like glass strings high overhead, bushed glistened like cakes made of diamonds, starbursts of frost etched themselves against our windows. At night, the trees clapped together in the wind and made a delicate sound.”

The testimonials of the minor characters are highly contrived and filled with clichés and lectures about the difficulties of being an immigrant. Many of these narratives open in the same way: “My name is Benny Quinto” or “My name is Gustavo Milhojas” or “I was born in . . .” While their countries of origin differ, as well as many of their experiences and backgrounds, these characters’ voices are barely distinguishable.

In comparison to Sandra Cisneros’s The House on Mango Street, also a novel that’s comprised of first person vignettes, The Book of Unknown Americans fails to create the language, tone, and voices of its characters. The writing lacks innovation.