The Book of Timothy: The Devil, My Brother, and Me 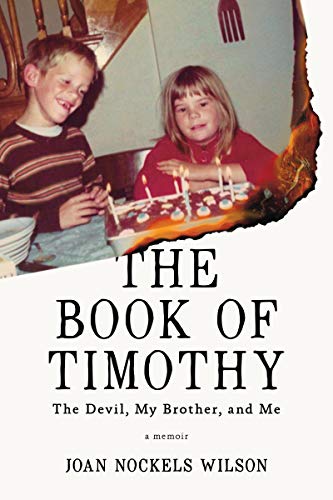 “Wilson has created a panoramic saga of cruelty, injustice, loyalty, and devotion. This is a heartbreaking, loving, moving story told by a sister, daughter, mother, woman who demands and deserves to be heard.”

Literature has its irredeemable villains; characters so devoid of nuance as to be the personification of evil; Bill Sikes, Inspector Javert, Iago are just a few loathsome examples. History, too, is populated by those who are beyond hope: Mengele, Caligula, Pol Pot.

And then there are those in everyday life who earn eternal contempt and repudiation. Often, they prey on the vulnerable; the liar who scams the elderly out of their life’s savings; the bully who beats his family; the pedophile priest who abuses children and then, to add outrage to horror, eschews any responsibility.

In The Book of Timothy: The Devil, My Brother, and Me, author Joan Nockels Wilson shares her mission to bring some measure of, if not justice, then closure, to the story of the priest who abused her brother Tim.

There are aspects of Wilson’s biography that are reflected in her telling of this tragic, enraging story. That she seeks retribution for the sins against her brother and other innocents is echoed in her having obtained, while working as an Assistant District Attorney in Alaska, the longest sentence for animal cruelty in the state. That she has a Master’s of Fine Arts in creative nonfiction comes as no surprise after having experienced the clarity, depth, and power of the words she chooses for her narration.

The Book of Timothy has multiple levels of storytelling within its pages. It is a travelogue of sorts, it is a family history, it is a tribute to her relationship with her brother. It can also feel like an especially wrenching episode of Law & Order: Special Victims Unit.

The structure of the book is rather unique. Each chapter is made up of longer and shorter pieces; some as brief as a sentence. It’s a style that works well for the writer’s voice Wilson uses (a voice which includes the words an attorney would employ to argue a case before a jury) to convey the many levels of her thoughts and actions.

She and her brother Tim are very close in age. They come from a big Catholic family in Chicago. Wilson shares details about their parents, their siblings, their grandparents and other family members, and makes all of these characters feel vivid and known. She shares information about her life, including a divorce and then the adopting of her beloved daughter with her second husband.

When the book opens, Tim is about to become a father. This has brought back to the painful surface horrible memories of a priest who abused him and other boys.

The statute of limitations for the abuse he suffered has run out for Tim. Wilson advises her brother as he pursues a lawsuit against the priest and the church. Settling the lawsuit will require accepting that the agreement will not “be construed as an acknowledgement or admission of wrongdoing or liability on the part of the Archdiocese of Chicago, the Passionate Order of Jesus Christ, Holy Cross Province, or John Baptiste Ormechea.”

Wilson assures her brother that he has stopped Ormechea from abusing others: “. . . because of you, he’s not a pastor anymore.” This is not enough for Tim: “If he doesn’t admit it, Joan, he gets away with it.”

Wilson travels to Rome, where Ormechea is in retirement in exile. In a photograph of him that she finds after a Google search, the villain “looks way too happy.” She provides glimpses into the sights, sounds, and culture of Rome that could be the basis for an excellent segment on any European travel channel. Given the reason for her trip, that she does so with some measure of warmth and humor is especially remarkable. After her very long journey to the Eternal City, the welcoming kindness of the owner of the hotel where she is staying inspires a disproportionate reaction: “I’m so tired that I think I love this man.”

Wilson eats dinner at the hotel restaurant’s communal table. And lets slip part of her plans: “I’ll go for a run, come back, clean up, then find a park and write a letter to the priest who abused my brother. He lives here, not too far away.” She also privately reflects on her intentions: If she were not a mother, could she be an avenging assassin?

“If I didn’t have Abbie, would I be able to do it? Kill Ormechea? What if I was prepared? I would’ve studied the Italian justice system and confirmed there’s no death penalty in Rome.”

Wilson is willing, in telling Tim’s story and her story, not to filter any of the truths. In so doing, she inspires the nodding agreement of each of us who cares about someone who has been horribly wronged. Vindicta mihi, vengeance is God’s, and many mortals would wish it to be theirs as well.

Wilson’s religious heritage is a seeming constant in this story and in her reflections. She considers the Book of Timothy, one of the Apostle Paul's epistles, and how that work served to oppress and silence women in the Catholic Church. Wilson unstintingly shares the conflicts in her soul with her readers. Her bravery and honesty are profoundly compelling.

Wilson arranges a meeting with Ormechea, a.k.a. Father J.B., by pretending to be a visitor from a parish in Pennsylvania. When the priest sees her, he recognizes her, though he calls her by her sister’s name, having spent much time at the family home while he was abusing Tim, abuse that shattered everyone in their family.

Wilson is civil to Father J.B. He agrees to meet her again. They have lengthy conversations, and the priest offers a shabby apology:

“First, let me apologize to you, in the place of your brother, and to your whole family. . . . I spilled the milk, and I can’t put it back in the bottle. I could cry and say I spilt the milk . . . but that is not going to help any of us.”

Wilson’s reaction speaks for many of her readers: “I sense my outrage building before I can damp it down and say, ‘Spilled milk’? Really, Father? That’s your comparison?”

Wilson does confront the priest and, as her brother predicted, Father J.B. hides behind (and finds comfort in) his faith that God forgives everything, his “get out of eternal damnation card.”

The full range of emotions inspired by reading The Book of Timothy is difficult to summarize. Wilson has created a panoramic saga of cruelty, injustice, loyalty, and devotion. This is a heartbreaking, loving, moving story told by a sister, daughter, mother, woman who demands and deserves to be heard.

Heidi Mastrogiovanni's essay "Our Monikers" will be published in 2022's Fast Fierce Women, the nonfiction sequel to Fast Funny Women.