The Book of Eating: Adventures in Professional Gluttony 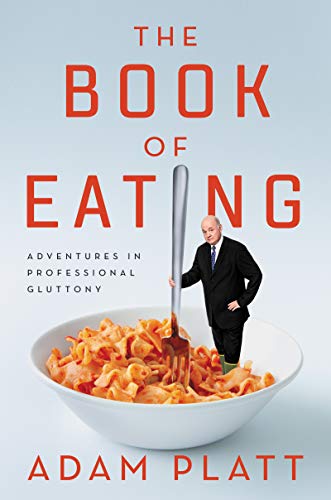 “Eating his way through Hong Kong does have its squeamish moments including, ‘warm paper bags filled with squid balls or barbequed octopus tentacles stuck on little bamboo sticks.’”

The early chapters of The Book of Eating Adventures in Professional Gluttony are thankfully, the most interesting where Platt regales childhood stories about his life as a globe-trotting diplomat’s son. Unfortunately, what the book lacks is emotion in any of the descriptions which ensue about his life of high and low edification. Throughout Platt refers to himself as the very large and white Platt, which may be true, but as a writer why not try some other adjectives, such as gargantuan with a crypt-like pallor.

When he refers to icons like MK Fisher in his tome, they are relatable, but the last chapters of his memoir list the minutiae of the New York dining scene that only a few New Yorkers would find amusing, let alone the rest of us.

Stories of his early days in Hong Kong, Kowloon, and Taiwan show a fervor for tasting new cuisines, which is unmatched through the rest of the book. Platt’s description of the smoky scent and the crackling skin of Peking duck makes your mouth water. Eating his way through Hong Kong does have its squeamish moments including, “warm paper bags filled with squid balls or barbequed octopus tentacles stuck on little bamboo sticks.”

Shanghai equally stars in the book, especially with Beggar’s Chicken, which you had to order days in advance. “The cook stuffed the chicken with chestnuts, mushrooms, and handfuls of sticky rice, wrapped it in lotus leaves, and baked it slowly in a ball of clay. When it was ready to be served, they brought the ball of baked mud to the table and let you crack it open with a small hammer to get to the soft melting bird inside.”

The Platt family home in New Hampshire with the communal kitchen, replete with some accoutrements from their foreign posts, sounds like a respite from urban life that anyone could enjoy. “Built by his father, the architect, in the upper reaches of the Connecticut River Valley, it was located on a ridge of the farmer’s fields above the river, between the towns of Plainfield and Cornish, New Hampshire, overlooking Ascutney Mountain.” Cousin Charlie’s table-side salad prep reads like a hilarious scene out of a film.

Platt’s chapter on Eating with My Family is amusing, especially when he took his young daughter Jane to Le Cirque with her four-year-old friends, replete with spaghetti sucking, snorting animal sounds, and the ephemeral dash of children around the tables. Parents whom have attempted a fine dining outing with young children will enjoy this.

No book on dining in New York City is complete without Italian cuisine, and Giovanni’s ranks high, especially his preparation of braised wild boar, which was so soft Giovanni cut it with a string. Platt’s grandfather had favorite New York restaurants based on the “time of day,” and they are memorialized here.

Platt pays homage to critic Jonathan Gold, quoting his column about devouring the elusive “fire energy chi” of a truly great taco, which disappears seconds after the tacos are served and unless you are at a first class place you will never experience it at all.”

The Book of Eating may provide a historical perspective on dining for millennials and generation Z who are accustomed to ordering food on apps and see no need to actually go to restaurants, if only they read books. Indeed there are even food service businesses that prepare restaurant-style meals but have no storefront and only communicate with their customers through the virtual world, delivering food through bike messengers. In the future AI will serve you with robots minimizing human contact even further. With today’s New York a juxtaposition of Shake Shack, Nobu, and pop-up eateries the concept of dining out has changed significantly, and Platt’s memoir takes you on that journey.