The Book of Broadway: The 150 Definitive Plays and Musicals 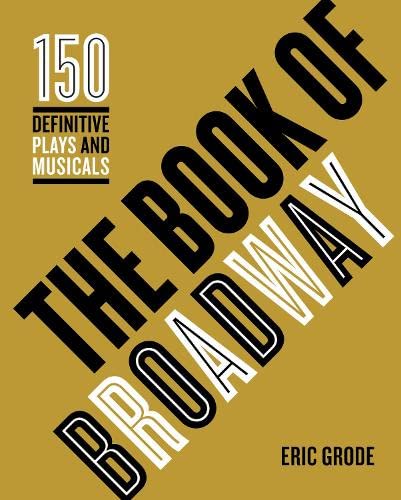 New York Times arts journalist Eric Grode’s The Book of Broadway is a lavishly illustrated coffee-table book with capsule histories of each show. For theater buffs it is packed with inside info to have around to settle those stage bets, for everyone else it is both a fun and frustrating compendium. Grode explains in the introduction he whittled down his list from 350 productions and also gamely admits some selections are inescapably subjective on his part.

Grode categorically excludes Shakespeare, for the very sensible reason that would take up 20 percent of the list. Also out are shows that took time to be transferred from off-Broadway. So by these narrowing parameters, the author otherwise dives in with his hot 150, highlighting each show’s artistic merit, industry success, and audience appeal.

For the Broadway Baby wannabes among us you can savor this mosaic of shows, sequenced in alphabetical order from A to Z: Abie’s Irish Rose to Ziegfeld Follies of 1919. Faster than Wiki, you can flip to Noël Coward’s world of privilege depicted in Private Lives to the fine young bohemians of Rent. Legendary shows of the past like Oklahoma!, A Streetcar Named Desire, West Side Story, Fiddler on the Roof, Hello Dolly!, Awake and Sing, A Chorus Line, The Iceman Cometh, Porgy and Bess, Company, and Hair, next to contemporary megahits The Producers, Lion King, Les Miserables, and Phantom of the Opera, just to mention a few. This is a trove of quick B’way history with fascinating and benign factoids about iconic stars, composers, directors, designers, playwrights, and choreographers.

But the book's sins of omissions start to unnerve. Take the L section, for instance, which ends with Joe Orton’s Loot, but if you were expecting to turn to Mame to start the M titles, you find that Angela Lansbury doesn’t make the cut. Instead you are easily distracted by an analysis of Robert Bolt’s A Man for All Seasons, followed by the stellar line up of Man of La Mancha, “Master Harold,” . . .  and the Boys, and The Merry Widow. Angela gets her revenge later in the capsule of Sweeney Todd.

Grode weighs in on the state of the health, or lack of, Broadway theater from its commercial for-profit enterprise in 1905 to the realities of not-for-profit viability in the current landscape.

Sometimes the synopses are curiously lacking. No mention of Christopher Isherwood as the source material for the musical Cabaret, for instance. The writer reluctantly gave the rights to his story Sally Bowles adapted to the play I Am a Camera, then adapted into the musical Cabaret. In both cases he was horrified by the results onstage, but grateful for the royalties he got.

How can there be two pages devoted to Cats without mentioning the thinness of the material or the critical drumming it took? Grode instead turns it into a touching personal remembrance of seeing the show with his grandfather.

In contrast, Grode admirably takes on Peter Shaffer’s treatment of Antonio Salieri in Amadeus, crediting Shaffer for writing a well constructed play, but flogging him for making up history and for sullying the composer’s name by claiming that he poisoned Mozart. So past these erratic editorial choices, when he focuses on shows that usher in a new era on stage and culture, from literary, performance, and historical contexts, it’s his 11 o’clock number.

Take his full-throated review of Angels in America: ”This is seven hours of poetic, graphic, fanciful, cerebral, mind-blowing theater.” You wonder though, why there is no mention of director George Wolfe anywhere in this entry.

One of the most impressive things about the book, aside from the well chosen archival photos, is that Grode rescues Broadway history from the mid-1800s through the vaudeville period, before the musical came into its own as a distinctly American art form. Most of these productions are virtually forgotten, but Grode deftly examines why they are indelibly part of the genesis of Broadway theater.