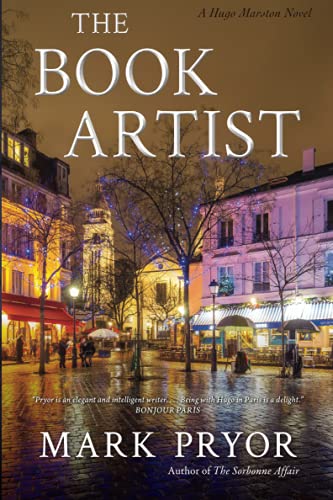 "There is more than enough in this novel to keep the reader engaged from beginning to end. Perhaps too much?"

Hugo Marston, international spy/detective is back in action in Mark Pryor’s newest (seventh) novel in this series of thrillers. The ingredients are all present: two lovely and talented women, a revenge-crazed criminal out for blood, a brutal murder, a power-hungry Parisian detective, and an assortment of possible culprits who would make Agatha Christie proud. Add to this the setting of Paris in winter, and the stage is set for action—and plenty of it.

This novel is particularly ambitious. Not only is Hugo involved in trying to solve a difficult murder case, nor is he simply engaged in attempting to extricate his love interest, Claudia Roux, from clouds of suspicion, but he and his long-time colleague, Tom Green, are being tracked down by Richard Cofer, who is determined to avenge the killing of his brother during a robbery.

The Book Artist begins happily enough: Hugo is sent to locate the lovely Alia Alsaffar, whose break through sculpture exhibit is scheduled to open the following day in Montmartre. The next day, at the opening reception, all hell breaks loose, the reader is plunged into the dual plots, and Hugo’s intelligence, bravery, and resolve are put to the test. Meanwhile, Hugo’s partner, Tom Green, is busy in Amsterdam trying to hunt down Richard Cofer before he kills the two of them.

A real strength of the novel is the writer’s close familiarity with policing, evidence gathering, and procedure. The go-between of Hugo and the territorial Lieutenant Marchand of the Paris police seems authentic. Another is the up-and-down romantic involvement of Hugo and Claudia, which heightens the dramatic intensity of the novel considerably.

There is more than enough in this novel to keep the reader engaged from beginning to end. Perhaps too much?

The use of dual plots can work if there is a clear connection established between the two of them. In The Book Artist, though, that connection is at best loosely made. Either plotline could have worked on its own merits. In this case combining the two threads seems superfluous and at times confusing and distracting. The murder of Alia alone would seem to provide enough twists and turns for a novel of its own, as would Tom and Hugo’s attempts to bring the dastardly Richard Cofer to justice.