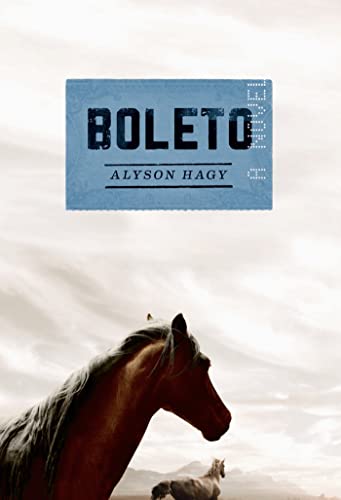 “One can almost hear the haunting music as he rides off into the sunset . . .”

This is an adult coming-of-age story: The main character, Will Testerman, has passed through the crucible of adolescence in which most coming-of-age literature is set and now is in his twenties. Although mature in many ways, he still hasn’t found his path in life after being set back by some bruising learning experiences and his mother’s illness.

Now he’s looking for a reliable way to earn a living and esteem in the contemporary West, using his solid ranching and horsemanship skills. Born and bred in Wyoming, he both loves and hates the place so is open to opportunities elsewhere—like the moneyed equine worlds of California.

His plan remains fuzzy until he comes across an exceptional filly and invests in her as means of establishing himself as a trainer and judge of good horseflesh. Eventually he names her Boleto (Spanish for “ticket”), representing his ticket out.

As is common in literary novels, Will’s character is deeply explored, and inter-character relationships are complex, often twisted. As well, a sense of darkness lingers behind any happiness and achievement he attains while moving with the filly from his family’s ranch to a summer job at a dude ranch, to an upscale polo-training facility in California. Along the way he discovers that the road to hell really is paved with good intentions.

We learn most about Will through his interaction with the filly, a slow and careful, loving and respectful training that teaches the reader much about horses. Ms. Hagy portrays this mainly through dialogue without quotation marks, so it’s never quite clear whether Will is speaking to the horse or communicating with her through thought and action.

Either way, both the filly and the reader understand his intent, and he reveals his mind, heart, and soul more persuasively than if the author tried to convey them through dialogue. Few people speak openly about those parts of their inner selves, whereas they can trust animals to accept them.

Ms. Hagy uses the no-quotation-mark technique throughout the book in human conversation, too, in a manner that’s confusing at first (reader wonders: Is this a typo?) but soon becomes comfortable because it’s always clear who’s talking. It gives the book a dreamy, slightly disconnected quality that augments Will’s alienation and disappointment and, ultimately, grief.

After a while the story gets frustrating, making one wonder why a character so internally strong can’t walk away from external forces that threaten to ruin him even though he’s astute enough to recognize them. It suggests a self-destructive tendency not supported by Ms. Hagy’s presentation of her main character’s psyche.

Even though the story is set in today’s West, which barely resembles the Old West that gave rise to so many heroic figures, Will still comes across as a cowboy hero, so we expect him to act as such and bring his story to a satisfactory close. Instead, we get a realistic ending that leaves a bitter aftertaste. This will disappoint readers who prefer inspiring fiction.

In the end, Will must choose between saving his soul and saving innocent people and animals. One can almost hear the haunting music as he rides off into the sunset . . .