This Body I Wore: A Memoir 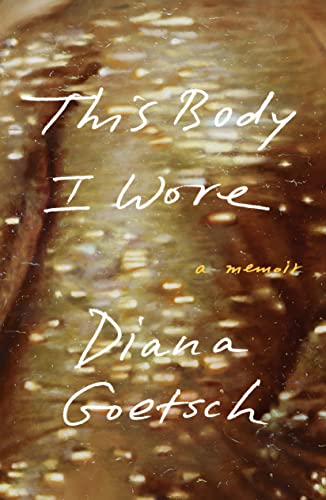 Fifty-seven-year-old Diana Goetsch, formerly Doug Goetsch, made the decision at 50 to surrender to the transition process and become a full-blooded transgender woman after decades of heartache.

In her provocative new work, This Body I Wore: A Memoir, Goetsch tries to explain the inexplicable. She is an accomplished poet and teacher who has spent the majority of her working life as a man, teaching the brilliant students at Stuyvesant High School in Manhattan how to write prose and poetry.

Appearing to her students as Doug Goetsch, she attempted to show them how to write fearlessly from the depths of their souls, which must have been a complicated endeavor for someone under such personal duress. Goetsch’s narrative holds our attention throughout, but the author sometimes runs afoul as the reader recognizes the many blind spots that hamper her vision. These distortions seem to wreak havoc on Goetsch’s attempts at new and healthy relationships. It’s not that we aren’t sympathetic to Goetsch’s suffering; we really are. But we recognize the weight of her emotional damage is enormous and worry that it will overtake her. She often seems to be struggling in a terrifying state of in-betweenness that has no clear borders for her to rely upon, or more importantly, no open channels in which she can allow herself to mourn her past life.

In this review, we refer to Goetsch always using the “she” or “her” pronoun in respect to her deep sense of herself as a female from her earliest beginnings. It seems insensitive to do otherwise, but the reader must keep in mind that for half a century Goetsch was seen and responded to as a man, all while feeling this identity was thrust upon her and was a gigantic mistake.

Goetsch grew up in Northport, Long Island, in a family filled with toxicity. Her preoccupied father would sit silently at the dinner table and rule over what was playing on the television. When Goetsch asked him to change the channel, she was moved to her room and left howling alone. Her older brother would torment her. But it was her mother who caused her the greatest damage. Goetsch writes poignantly: “Before I was a difficult child, I was an impossible baby.” Her mother told her she was born with celiac disease and was allergic to breast milk. In addition, she was an unwanted child. These were all cold-hearted lies, except perhaps for being an unplanned baby. Years later, Goetsch would begin to experience flashbacks about being abused by her mother. This explained the scarring she noticed that spread over her lower abdomen and genital area. She broke ties with her mother as an adult, and remains estranged from her father and brother.

Despite the horror of her beginnings, she seems to have always possessed an indomitable spirit. She joined the high school band, and was drawn to the arts, sports, high school theatre, and literature. She had parts in several of the school’s theatrical productions. She even dated a few girls while appearing to them as Doug, and things went along smoothly during the kissing part, but seemed to stall there, and the girls soon lost interest, sensing something was amiss.

She had already started playing around with poetry, which seemed to her a spiritual haven of sorts. It was a magical place where the intricacies of gender identity had less sway than what was in one’s heart. Many in her high school thought she, or the person they knew to be Doug, was probably gay. If only it were that simple. She would come home from school and get undressed and recoil from her reflection in the mirror. She was nauseated by the pitch of her voice, as well as the clumsiness of her gait. It was terrible “being a closeted trans person in a place and time where no such thing existed.” She writes bluntly “Nobody had access to me, not even me. I only knew I wanted to be a girl-I didn’t know I already was.” Goetsch is masterful at showing us the utter chaos that envelops the mind when everything one sees about oneself seems out of whack with their sense of who they are. She grew up in the days before the internet offered comfort and kinship to those like her.

After high school, Goetsch wandered aimlessly listening to Charlie Parker and Miles Coltrane while working the night shift at a local deli. She eventually made it to Wesleyan where she thrived academically. But her relationships continued to be fraught with land mines. She writes: “Whenever I felt excluded or forgotten—even the anticipation of being forgotten—the offending party became my mother and brother driving off without me. Minor breaches of connection, the unreturned call, a friend letting me down, would humiliate and infuriate me, rather than admit to others (or myself) how worthless such slights made me feel. I would cut off friendships. I cultivated enormous pride and independence, to compensate for my inability to trust or forgive others . . .” Readers are stunned by Goetsch’s revelation here because it is one of the few times she seems able to look past herself and her own responses, and understand how her behavior and traumatic past have caused her to behave and hurt others. Most of the time she seems oblivious to her own role in what plays out with others.

But we feel compelled to forgive Goetsch for her obtuseness, because she makes us understand the intricacies of wanting to become a transgender woman. The overwhelming allure of femininity and its grip on her. She shares with us her intense attraction to all things feminine, including shimmering stockings, and wrap-around dresses; as well as nail polish, wigs, and make-up. She speaks of a cousin who came to stay at her family’s home for a bit, and recalls staring for hours on end at the girl’s feet because she wore Mary Jane shoes which Goetsch was mad for.

When she as Doug, had sex with women, the pay-off wasn’t the sex, but watching the girls get dressed afterward. She loved the way they touched up their faces and slinked into their pantyhose and dress before leaving. The way women presented themselves to the world was a world unto itself for her. She seems not to have had much insight into who these women were, or what they needed or wanted, or what they were struggling with. Most of her relationships as Doug ended poorly and within a few months.  What disturbs the reader is her assessment of these break-ups. She seems to always paint herself in the brightest light; almost a haloed figure, and the women seem to degenerate before our eyes. Ladies who had been charming become manipulative and cunning. Women who just weeks ago were magical became alcoholics or bad mothers. Something seemed fishy about her evaluations. It was as if she didn’t see them at all.

During the years before transitioning into a transgender woman, she played around with crossdressing hoping it would relieve the tension she felt everywhere. She tried to speak as a woman does, and lowered her eyes coyly when speaking with others, but the gay women she hit on soon realized she wasn’t female. and the conversation was often stopped short. She recognized that she didn’t want to just pass as a woman in a darkly lit bar; she wanted to live the life of a woman who was ready to tackle all that entailed, and the list to accomplish this was daunting.

But at a Buddhist retreat, the decision was made, and she describes with delight her epiphany: “As the sun rose over the mountains behind me, pulling in the shadows and flooding the valley with light, I was overwhelmed with compassion for the world’s suffering. I wept for all the people I hadn’t helped because I’d been stuck in my own problems all my life.” Again, we are struck by the naked truth of her confession, and hear behind it her wish to become able to be in a relationship with another woman in a way that was different from before. In a way that would allow her to be genuinely intimate, authentic, and giving. But at the same time, we aren’t sure she will be able to do so. And we worry that the burden of transitioning, with its many starts and stops, will sap her strength and vitality.

Once Goetsch decides to go for it, she moves fast. She begins taking hormones and researching gender reassignment surgeries. She considers getting a nose job, and begins voice lessons at the NYU Speech Clinic where she attempts to learn to speak as a woman. She starts presenting herself to the world as a woman a few days a week, while remaining Doug the rest of the time. Particularly when she goes to visit William Zinsser who she is teaching poetry to in his final years, she is troubled she can’t share with him this journey, knowing instinctively it would repel him. But on the days she dresses as a woman, she spends hours finding the clothes that suit her best. She admits there were and are moments of doubt, particularly when she looks in the mirror and feels startled at the changes she sees starting to take place. She mentions a new girlfriend that has come into her life but says nothing about it, almost as if she is afraid to jinx it.

We are filled with admiration for her courage, but filled with uncertainty too. But perhaps we underestimate her resoluteness; a character trait that seems to have accompanied her throughout her life. In a poignant reflection she wrote about her life in transition, she wrote this: “What visions do you trust? When you’re alone in a cabin for 12 days and something shows up in your stillest moment, is it real, or is it in need of a reality check? Is our everyday reality, as one Tibetan lama suggested, a fantastic rumor? Isn’t depression, my most constant companion these 50 years, the result of being out of sync with reality? Could decades of thinking of myself as male be a grand illusion? Who would believe it? Could I even believe it?”