The Body: A Guide for Occupants 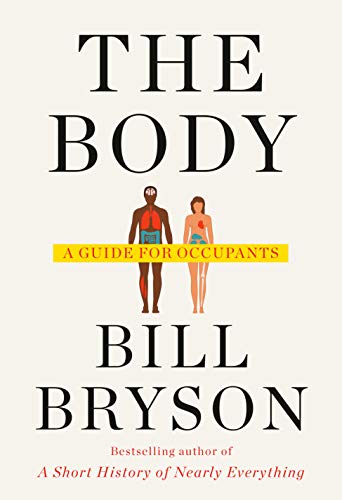 “Bryson has produced a compelling, overly engaging work that is written for Everyman. It is a book that one can imagine being dipped into here and there for a long time as The Body demands the reader return to it for more.”

Did you know that we have 10,000 taste buds, can detect 1 trillion different smells, and exhale almost 150 chemical compounds with each breath? Well, author Bill Bryson does, and he packs that information and more (much more) into his new nonfiction opus The Body: A Guide for Occupants.

A writer of eclectic, sometimes humorous, always informative writing—especially evidenced by his bestseller A History of Nearly Everything—Bryson turns his gaze to the human body with his new book.

The Body is not by any means a myopic view, for that would be anathema to the Bryson style. The Body is expansive, a panorama of stories about people, history, medicine, and yes, body parts. It is a packed with delightful nuggets alongside startling statistics and intriguing facts. In fact, the work is so compressed with interest and detail that reading it straight through only one time does the book a great disservice.

Bryson divides The Body into logically-constructed, thematic chapters: “The Heart and Blood,” “The Immune System,” “The Guts,” and so on, and each chapter yields a plethora of statistical and historical information. For example, in “The Brain,” Bryson relates that the brain is 70–80% water and holds 200 exabytes of information—a size roughly equal to the entire digital content available in the world today.

He then ventures into lobotomy and Walter Jackson Freeman who from the late 1940s thru the 1960s traveled the country “performing lobotomies on almost anyone brought before him.” One time, Freeman even bragged about lobotomizing 225 people in 12 days. His method of lobotomy, as Bryson relates, was quite simple: “He inserted a standard ice pick into the brain through the eye socket, tapping it through the skull bone with a hammer, then wriggled it vigorously to sever the neural connections.” As crude as this procedure was deemed by professionals, even more troubling was that the ice pick would sometimes “break off inside the patient’s head.” Indeed, the effects of Freeman’s lobotomies were grave, leaving patients “lifeless shells” in many cases, but Freeman continued with lobotomies until his retirement in 1967.

With uncomplicated prose, Bryson relates information about T-cells and cancer, noting that “40% of us will discover we have cancer at some point in our lives,” and adding, “What it comes down really is cancer is, appallingly, your own body doing its best to kill you. It is suicide without permission.” Things that are glossed over or buried in countless esoteric science journals are here delivered with clarity and aplomb.

Bryson takes up the opioid crisis in “Nerves and Pain” writing that over 40% of Americans experience chronic pain. He notes that while America has only 4% of the world’s population, we consume 80% of its opioids and every year the drug claims about 45,000 American lives.

Similarly, in “Food, Glorious Food,” Bryson raises concerns about American obesity. Today, he writes, we consume 25% more calories a day than in the 1970s; we eat 268 pounds of meat a year, compared to the average Brit who takes in 185 pounds; and we consume 22 teaspoons of sugar daily. While short on suggestions for ameliorating this troubling behavior, Bryson concludes with this advice: “The prudent option, it seems, is to have a balanced and moderate diet. A sensible approach is, in short, the sensible approach.”

The Body has a keen knack for unearthing the forgotten wonders of health and medicine. There is Walter Bradford Cannon who pioneered our understanding of the digestive system by X-raying his students while they consumed food. Or Peter Medawar who won the Nobel prize for his research on the immune system and helped to explain why skin grafts are often rejected from outside donors. Or Theodor Escherich who devoted his life to studying stools; while that may seem like a sorry job, it led to the discovery of E. Coli, now “the most studied microbe on the planet.”

A complaint, if one be had, is that The Body becomes so interesting in parts that a reader will feel compelled to share, share, and share again. Thus, the review shall close with a SIDE EFFECT DICLAIMER: The Body may have a negative impact on friends and family due to a compelling desire for a reader to share an abundance of TMI. Ultimately, Bryson has produced a compelling, overly engaging work that is written for Everyman. It is a book that one can imagine being dipped into here and there for a long time as The Body demands the reader return to it for more.