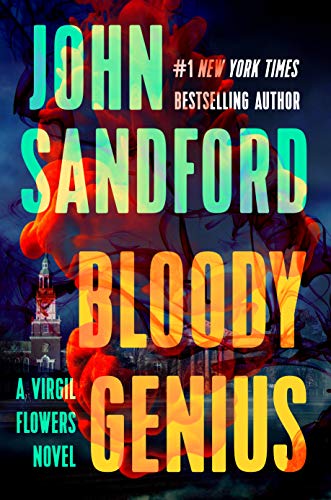 “Fans of Virgil Flowers will love Bloody Genius, as will fans of Lucas Davenport and the Prey series. Those previously unfamiliar with Virgil or Davenport will quickly become fans. And nobody will get much sleep until they have finished turning all the pages. John Sandford has done it again.”

Only a handful of authors sit atop the heap of America’s best thriller writers. Firmly ensconced in their midst is John Sandford, pseudonym for Pulitzer Prize winning journalist John Camp, who earned his place with a prolific body of work that has garnered him a worldwide following. Judging from his latest, Bloody Genius, Sandford isn’t going anywhere soon.

Many, if not most, Sandford fans likely got their start with the Prey series, featuring Lucas Davenport. Starting with Rules of Prey, and extending for a run of 29 books, Sandford populated the Davenport novels with supporting characters who had strong enough existences to survive on their own. Such is the case with Virgil Flowers of the Minnesota Bureau of Criminal Apprehension, he of the shaggy hair and rock band T-shirts, who now appears as the lead in his own series for the 12th time.

“Page turner” can be a cliché, but just because it’s a cliché doesn’t mean it isn’t true. This time, Virgil is sent to the campus of the University of Minnesota to investigate the murder of a controversial professor, Barthelemy Quill, who was done in—fittingly enough—by a laptop computer to the head while in the school’s library. Perhaps this might lead to a new solution in the board game Clue: Mystery killer in the library with a laptop.

Working with Minneapolis homicide detective Margaret Trane, Virgil’s initial suspicions zero in on the late professor’s rivals in the university’s Department of Cultural Science. According to Trane, a newly-tenured professor in that department had an axe to grind against Quill, who publicly trashed her recent New York Times bestseller on cultural medicine as “ignorant, unscholarly, uninformed, and a bunch of other stuff.” Hell hath no fury like a professor scorned.

But Virgil is not one to jump to conclusions. As he digs deeper, he discovers that other suspects abound, besides the academics, including an estranged wife, two ex-wives, and two ex-lovers. The only one who doesn’t seem to have a motive is Quill’s daughter, who is the beneficiary of a revocable trust, but she is already getting payments from the trust, which will end at age 30 regardless of whether her father is dead or alive.

But just as Virgil doesn’t jump to conclusions, Flowers thrillers don’t wallow in the obvious. Sandford’s readers have learned to expect the unexpected and, like Virgil, to look for clues and killers in the unlikeliest of places. Bloody Genius is no exception.

Tension escalates as Flowers and Trane investigate. Leads fail to pan out; motives expand to include the illicit drug trade, shady lawyers, and love scorned; and the suspect pool widens. Lucas Davenport makes an appearance, as do other series regulars like Del Capslock, which should please Sandford fans who anticipate their guest appearances like Hitchcock fans awaiting one of the famous director’s cameos.

As so often happens, Sandford’s wry humor invades the narrative with tongue-in-cheek descriptions that convert the obvious into the absurd. For example, in describing the murder weapon, Sandford writes, “The DeamBook Power P87 made an excellent weapon, not because of its Intel Xeon i7 processor, or its 64 gigs of RAM, or its high definition display, but because it weighed more than twelve pounds and had sharp corners.”

Fans of Virgil Flowers will love Bloody Genius, as will fans of Lucas Davenport and the Prey series. Those previously unfamiliar with Virgil or Davenport will quickly become fans. And nobody will get much sleep until they have finished turning all the pages. John Sandford has done it again.