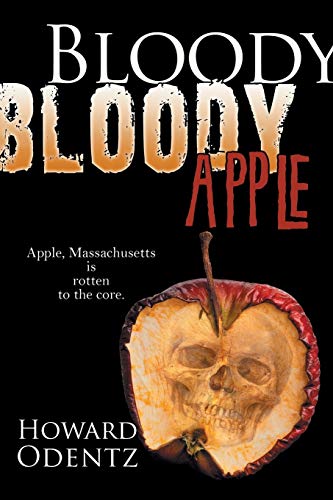 “evil is never fully destroyed; it simply takes another form.“

Apple, Massachusetts is a dying town, a roach motel in which its inhabitants only escape through death.

“Every fall, when the orchards ripen and the leaves begin to die, there are murders. We know it, and we accept it.”

For 60 years, the killings have happened, and this year is no exception. The only difference this time is that 17-year-old Jackson Gill, his girl, Annie, and his best friend, Newie, find the body. Thus far, there have been two killings.

“Now there is a third body in the woods, propped up against a tree. It’s a girl but I’m afraid to look. I’m afraid that I’ll know her . . . once again, I feel the tug of time yanking the last days of youth away from me. I don’t want to grow up if growing up means dealing with death.”

Jackson does know the girl, a fellow student. They tell the sheriff. This is awkward because he’s also Newie’s father. Some day Newie’ll replace him.

“Life’s going to be weird when Newie’s finally wearing a badge. . . . It’s not going to be the same. I can already feel time stretching thin around us, getting ready to snap the umbilical cord between whatever kind of life we’re living now and adulthood.”

The usual crime scene investigation ensues. Everyone knows they’re only going through the motions. No clues will be found and no one will be caught.

“No wonder we have murders in Apple . . . no one cares. No one probably knows we’re here.”

There aren’t any visible motives for why the killings occur in the fall, though people have many theories.

Jackson doesn’t believe that, though he has no particular theory of his own.

“I don’t hold much stock in superstitions or religious crap. . . .  They’re all just excuses. People like excuses.”

After giving his statement to the police, Jackson goes home but that’s no refuge. Two years before, his sister’s best friend was one of the victims and Becky has been barely coherent since.

The rest of the family isn’t any better off.  Jackson’s mom is barely functioning in a severe depression. His father spends all his time creating crosses to decorate every room. His grandfather has been wheelchair-bound since Becky pushed his wife down the stairs causing her death.

“My mother doesn’t move.  She continues to stare at nothing. . . . Her medication doesn’t seem to have kicked in. She’s only a shadow of herself. My dad’s no different than always . . . I think he’s damaged inside.”

It’s a disastrously dysfunctional family, with young Jackson taking over the responsibilities for everyone’s welfare, doing laundry, cooking, making certain his grandfather’s fed and his mother and sister get their medications. He hopes someday everything will return to normal but he knows better.

“Some things are just too damaged to be fixed. No matter how normal they appear on the surface, they’ll always be broken underneath.”

Tonight, something new has been added. Not-Becky has an important message for Jackson.

“With her free hand, she lifts up her shirt. . . . in the skin, in angry red welts, it says the words, Five will die, and I know immediately what Becky is trying to tell me. . . . This is autumn in Apple. Five will die this year.”

As each death occurs, the terror mounts for Jackson as he fears he, Annie, or Newie will become a victim. After all, no one is exempt either by age or gender. And then, he discovers the killer, and why he kills.

Author Odentz has penned a chilling tale. Told from Jackson’s point of view, Bloody Bloody Apple is a multifaced horror story. Besides dealing with the terror of an unknown killer with no rhyme or reason for his crimes, the teenager highlights the dysfunctional isolation of Apple’s families juxtaposed with the estrangement all teenagers suffer. The last sentence of the story is chilling and ambiguous, serving as it does to point out that association with evil, no matter how remote, is always corrupting in that evil is never fully destroyed; it simply takes another form.