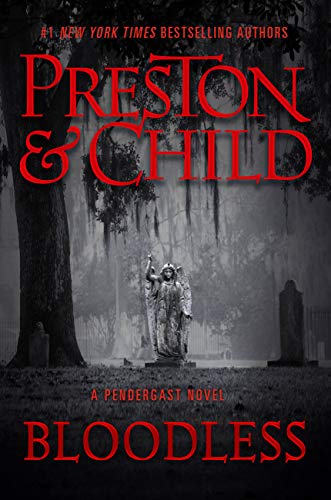 “Bloodless is the best Pendergast novel so far.”

After solving the crimes on Sanibel Island, FBI agent Aloyisus Pendergast and crew are on their way—Pendergast and his ward Constance to Miami, Agent Coldmoon to Denver.

Neither is particularly happy when their helicopter is re-routed to Savannah, where a series of crimes are taking place.

“‘Three days before, the body of a local hotel manager was found washed up on the banks of the Wilmington River. His body was completely drained of blood.’

“Pickett looked up at her with an expression of surprise. ‘A mortician couldn’t have done a better job.’”

Pendergast is thoroughly at home in the “most shadow-haunted place in America,” Coldmoon finds Savannah a “spooky city with its gnarled trees and crooked houses.” All he wants is to be on his way to Denver.

It’s discovered the deceased was killed in the garden of the Chandler House, a mansion made over into a hotel. No one can discover a reason why the body was dragged to the river. When a second blood-drained body is found, and a witness gives the locale of the death, it’s discovered that one was also transported miles from where he died.

“‘The only possible conclusion is that he flew from one spot to the other—or rather, was flown.’’’

Rumors of the “Savannah Vampire,” are resurrected. Other factors not necessarily pertaining to the crime but causing complications soon appear.

An influential Georgia Senator, up for reelection, is putting pressure on ADC Pickett to solve the crime as soon as possible. “‘Let me explain something to you, Pendergast. I’ve got a rally coming up that’s crucial to my re-election. I can’t have anything interfering with or depressing attendance.’”

A film crew is making a documentary, complete with their own “ghostbuster” who is debunking Savannah’s haunted houses right and left, while a rival stalks them, gathering information for his own tell-all novel about their activities.

“Gannon stared into her monitor. With a gasp of fear, she stumbled backward, trying frantically to unbuckle the monitor from its harness. Everyone around her was scrambling to get away, dumping their equipment and turning to flee—as a great gust of dank, oily air issued from the mouth of the tunnel and a huge shape came beating out, rushing toward them, demon wings spreading like a cape, voices screaming in terror and agony.”

Then, there’s the owner of Chandler House, an eccentric old lady who lives in the top story of the hotel and is rarely seen.

Constance takes it upon herself to find out more about Alice Frost and discovers more than she expects; Ms Frost’s late manager had been playing the stock market for her and has amassed several million dollars in a very short time, all legally. How?

Constance’s discovery will bring answers to all their questions, while it solves the case, but not before a monster from another dimension lays waste to the city in a Godzillafest of destruction.

The first chapter of Bloodless relates the story of D. B. Cooper and his leap from Northwest Orient Airlines Flight 305, into history. (If the reader doesn’t know who D. B. Cooper is, look him up on Wikipedia.) Chapter 4 begins in the present as the helicopter bearing Agents Pendergast and Coldmoon, with Constance Greene, to their next destination.

We are swept into the scene of the crime and D. B. Cooper appears to be forgotten, leaving the reader wondering why mention him in the first place and then shunt him aside?

The answer will come, be assured, and, if somewhat far-fetched, fits deftly into the storyline.

Demon-haunted Savannah, D. B. Cooper, bloodless corpses, and Agent Pendergast. Who could ask for anything more?

This novel should satisfy anyone who likes police procedurals, thrillers, or horror stories. There’s plenty of atmospheric description, a slightly clichéd plethora of characters the reader will either love or hate, and a plot to capture the imagination. Though the ending does stumble briefly into science fiction, it nevertheless gels with the rest of the story enough to become believable within the often unbelievable context of Pendergast’s world.

The Q&A between Constance and Frost may also seem a bit far-fetched. Would someone hiding such secrets actually reveal them to a stranger during a True or False game?

The climactic battle bringing about the ending is on a par with the devastation wrought in New York by the creature in Relic, the first entry in this series, lately made into a movie. Bloodless practically begs to be dramatized so CGI effects could likewise do justice to the destruction wreaked upon Savannah.

The ending is in a way bittersweet as Pendergast and Constance are offered two pathways into the future. Here’s hoping those pathways converge in the next novel.

Bloodless is the best Pendergast novel so far. Keep them coming!