Blood in the Water: How the US and Israel Conspired to Ambush the USS Liberty 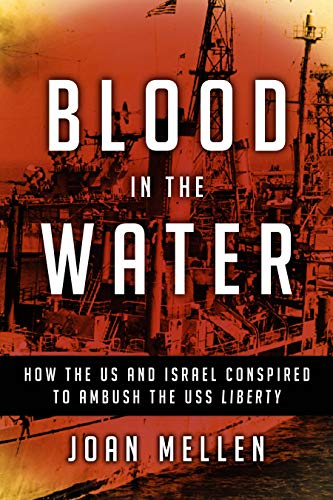 “Although America and Israel have been best of friends since 1967, Mellen’s latest work claims that this friendship is based on betrayal and spilt blood.”

On June 8, 1967, a series of airplanes and at least one helicopter attacked the USS Liberty as it meandered around the Eastern Mediterranean near Egypt’s Sinai Peninsula. By day’s end, 34 US Navy sailors were dead and 171 were wounded. The attacking planes with blacked out hulls belonged to Israel, a nominal American ally. Pretty soon after the attack, Tel Aviv came forward to say that the attack had been an accident—a case of mistaken identity.

Author Joan Mellen does not buy the Israeli version of events. In her history book Blood in the Water, Mellen lays out in detail why the attack on the USS Liberty was not only deliberate, but also directed by some of the top officials in the CIA and the American government.

Chief among these “traitors” is James Angelton, the CIA’s head honcho of counter-intelligence at the time. Mellen says here that it was Angelton, along with Meir Amit, the director of Israel’s Mossad agency in 1967, who decided to carry out a false flag operation in order to legitimize an American bombing of Cairo. Supposedly this would have been a win-win for both Washington and Tel Aviv, as a strike on Egypt would possibly kill President Gamal Abdel Nasser and at the same time protect the Israeli nuclear arsenal at Dimona.

Mellen mostly tells her story through the words of others. Besides interviews with the surviving sailors, Mellen’s bibliography is littered with other historical and political texts, almost all of which challenge Israel’s official account. There is surprisingly little primary research, and this is dangerous given some of Mellen’s grand, but unsupported assertions.

For instance, Mellen says that the 1898 sinking of the USS Maine in Havana Harbor was a false flag operation committed by the US government (this is the opinion officially endorsed by Castro’s Cuba). She then neglects to mention the multiple studies done on the Maine and its wreckage, and the fact that most have concluded that the sinking had been caused by an accident onboard.

On another page, Mellen writes that over 800 Egyptian soldiers were gunned down by Israeli forces at the town of El-Arish. These accusations were originally made by a former ABC newscaster in 2001 book, but that book put the body count was around 400. Later, an eyewitness named Gabi Bron reduced the death toll even further to just five. At one point, Mellen takes as gospel a semi-fiction memorandum written by an unknown Israeli that was found in the files of CIA asset Dick Thompson. The memorandum is quoted, but not reproduced as an image in the text.

Besides unsupported accusations, Blood in the Water is checkered with unnecessarily snide remarks (Angelton is labeled a “fraud” and Harvard and Yale are demeaned because Angelton attended both), tons of repetition, and an obsequious devotion to certain characters (John Hadden, the CIA chief in Tel Aviv, is at one point labeled the book’s “hero”). Mellen intrudes far too much in this gripping narrative, and these constant interruptions hamper the story overall.

Still, these black marks aside, Blood in the Water does make it abundantly clear that Israel not only knowingly attacked an American ship, but it did so with the intent of killing everyone onboard. Although America and Israel have been best of friends since 1967, Mellen’s latest work claims that this friendship is based on betrayal and spilt blood.