Blood Moon: An American Epic of War and Splendor in the Cherokee Nation 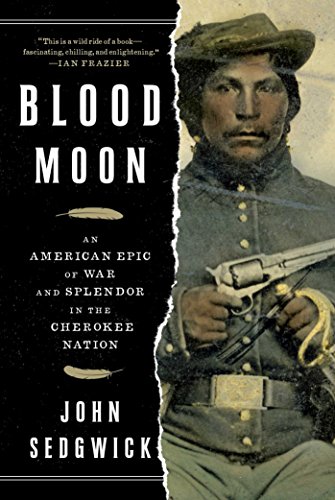 The tragic and sordid story of the relations between European whites and Native Americans should be well known to all, even without knowledge of specific details in which individual tribes are concerned. In particular, the story of those relations with respect to the Cherokee tribe are an especially galling and horrific one where the United States and, notably, the state of Georgia, played their part.

This volume is an account of that tribe and its history from first contact with whites through the end of the Civil War. It focuses primarily on the prominent leaders, and their relations, who led the Cherokee on a roller coaster ride of highs and lows in their efforts to keep their homeland and, at the same time, assimilate and coexist with white civilization upon the realization that resistance to it would be futile.

Those leaders, John Ross and The Ridge, play a very heavy and significant part in this story as their followers eventually evolved into two parties. One, led by the former, a Scotsman who married into the tribe, was a so-called resistant or Patriot group that hoped to retain as much of the traditional tribal homeland as possible, even while becoming farmers and livestock ranchers.

The latter was head of a group, the Treaty Party, which conceded the necessity of moving west of the Mississippi, despite a decisive victorious decision in the United States Supreme Court which Andrew Jackson refused to enforce, as a result of the Indian Removal Act by the United States government and move to an area which would ostensibly remain native with no interference from whites.

Consequently, a divide and conquer opportunity was available for whites to exploit, playing one off against the other until a decision was made. Between the efforts of the Federal government to purchase the Cherokee homeland and the outright theft of it, by lottery, through the Georgia state government, it was essentially a foregone conclusion, leading to the Trail of Tears and complete removal to Indian Territory in the mid-1830s.

The Cherokees’ internal troubles continued even in the west as the conflict over slavery was finally rearing its head and would eventually plunge the nation into war. Each of the aforementioned parties had its reasons for taking sides.

Those who favored the “peculiar institution” went with the Confederacy as it also obligated itself to cover treaty annuity payments to the Cherokee not always consistently forthcoming from the Federal government. There was also the implied hope that perhaps a return to their traditional homeland would be their reward for siding with the South.

Those who opposed slavery served the Union if for no other reason than the fact that many of tribe had been witness to the might and overwhelming force that the Federal government could bring to bear and held out for the annuity payments as required by treaty. In the event, Union victory brought retribution to both sides although certainly much more to those who “went south.”

Although not really covered here, postwar chicanery continued to dog the Cherokee as Indian Territory was ultimately opened up to the coming of railroads and white settlement and resulted in the creation of the state of Oklahoma.

As author John Sedgwick is not a historian, there are no traditional footnotes. The notes reference specific pages and list the source(s) consulted. Also, the sources used are virtually all secondary ones from the 20th century. Seemingly, there are no archives, memoirs, journals or documents from the Cherokee themselves or others prior to 1900.

Fortunately, there are two excellent sections of illustrations, photographs, and engravings of relevant personages, places, and other significant items that provide context and further information to enhance the text.

The four maps provided are also important as they delineate the traditional Cherokee homeland over several states in the early days of white contact, the shrinkage experienced as white settlement expanded by hook or by crook, the routes taken to the west as removal was enforced and, lastly, sites associated with fighting in the Indian Territory in the 1860s.

Characterized as the Cherokee Holocaust, ultimate removal and the Trail of Tears, in spite of their efforts to become “civilized,” serve to spotlight their long suffering history and what could be described as an early nadir in our relations with native peoples which culminated at the end of the 19th century. They, at the very least, deserved better than they got.