Blood Feud: The Man Who Blew the Whistle on One of the Deadliest Prescription Drugs Ever 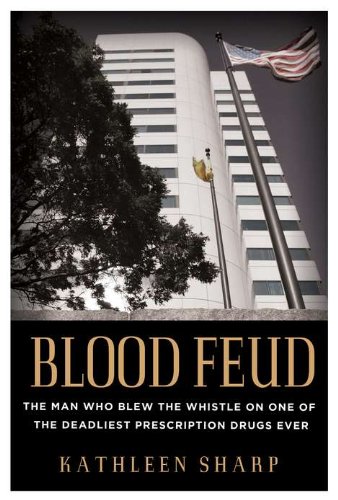 “Kathleen Sharp’s writing style leads the reader effortlessly through this horrifying saga of deceit, greed, and human destruction. . . . reads like a Robin Cook medical thriller and should be on every American’s bookshelf.”

If you worked as a sales rep for a pharmaceutical industry giant and the company leaders instructed you to promote a new wonder drug—with repeated assurances of the agent’s effectiveness and safety—you’d probably lead the charge. But what if that drug turned out to be a huge moneymaker for the company, while wreaking havoc for patients? For Mark Duxbury, the central figure in Blood Feud, this nightmare became reality.

Author Kathleen Sharp had full access to and cooperation from Duxbury, his friend and fellow sales rep Doug McClellan, and Attorney Jan Schlichtmann who would try to coordinate legal efforts. With the information she has obtained, Ms. Sharp has produced an in-depth indictment of the pharmaceutical industry, the Food and Drug Administration (FDA), and some of the country’s physicians. This story offers a look at behind-the-scenes deceitful practices that not only line the pockets of the drug companies and some physicians, but also places the health of already ill individuals in greater danger.

The story revolves around a genetically engineered version of the human protein, erythropoietin, created by Amgen and licensed to the Ortho Biotech division of Johnson & Johnson. This agent, marketed as Epogen by Amgen and Procrit by Ortho, was said to reduce the need for blood transfusions. While the drug offered some potential benefit, the two pharmaceutical companies engaged in a dangerous territorial tug-of-war with patients caught in the middle.

When Ortho first introduces the drug in 1991, its sales reps—including Duxbury and McClellan—follow company policy and actively promote the drug; however, corporate greed prompts leadership to instruct reps to encourage physicians to administer higher and higher doses without having first established the safety of increased dosages. The book relates the ongoing turf wars between Amgen, who was authorized to sell the drug to kidney dialysis patients, and Ortho, whose target audience were non-dialysis and chemotherapy patients.

Ortho mesmerizes its sales force with luxury trips to expensive resorts where guests are treated to the best accommodations, gourmet food, lavish presents and exotic entertainment. Duxbury notes that these “. . . carefully orchestrated ritual[s] [were] designed to strike an emotional chord in this corps of big-game hunters.” That, it certainly did.

A distinct theme runs through the book, which haunts Duxbury: “plausible deniability.” He asserts that Ortho instilled this mantra into its reps to assuage uneasy corporate consciences.

Initially, Duxbury buys into Ortho’s scheming ways and scrambles to the enviable pinnacle, earning two coveted Biosphere awards, which the author calls the fulfillment of a “psychic need.” Duxbury also receives “Ortho’s totemic symbol of power,” an expensive signet ring. But in time, he comes to realize that the company’s, as well as his own, actions could be jeopardizing the lives of many individuals.

Woven throughout this incredible story are the personal escapades of Duxbury, who is not an entirely sympathetic figure. He has been arrested for assault, domestic violence issues and at one point attempts suicide. But the reader can feel his frustration at the roadblocks he faces in trying to stop Ortho’s unethical behavior.

By the time Duxbury realizes that Ortho embraces core values that are “. . . quantitative, revolving around numbers, rankings and statistics,” his marriage has begun to crumble and his physical health suffers. He develops his own demons in the way of depression, physical and mental impairment, divorce, and domestic abuse charges, stemming from his ethical dilemma regarding his job.

At one point, he was seeing a neurologist, psychologist, physician, and nurse practitioner concurrently. Duxbury’s firing in 1998 and subsequent inability to find work for the next year contribute to his physical and emotional downward spiral. Duxbury comes to believe he is being gaslighted, “. . . a subtle but powerful type of reprogramming in which the dominant person tries to waken the subservient one.” Ortho’s ever increasing quotas and shrinking areas with key medical facilities would certainly appear to be exactly that.

McClellan at first refuses to become involved in his friend’s attempts to reveal Ortho’s unethical practices. However, he soon comes to recognize the truth in Duxbury’s accusations and joins forces with him.

Blood Feud reveals the abusive and unethical practices that govern the pharmaceutical industry. Readers will learn the frightening truth about unique schemes drug companies concoct to boost their bottom lines with little regard for the welfare of the patient.

The federal government comes under fire as the FDA repeatedly fails to verify the validity of claims the drug companies make regarding the efficacy of their products. Instead of simply writing checks to the physicians—as they did—the agency should have been examining more closely reimbursement requests. Medicare paid 100 percent of the average wholesale price of Procrit for years.

Ortho’s ability to receive government support for Procrit should shock readers. While the company repeatedly promised to produce study results, it made only a few feeble attempts to gather credible documentation. Halfhearted efforts involved small sample sizes, many of the subjects dropping out before the end of the study, undocumented information and no follow-up. The studies Ortho did conduct gathered few signed patient consent forms, involved no placebo controls and no strict Institutional Review Board monitoring. According to the author, the trials had “no protocol, no efficacy or safety endpoints.”

In addition to Duxbury’s personal tale, the author introduces Jim Lenox, a 44-year-old gentleman with lung cancer who appears to have beaten his disease; but a deadly dose of Procrit leads to a horrific and graphically depicted death for this individual, which drives home the message about the drug’s devastating consequences.

Kathleen Sharp’s writing style leads the reader effortlessly through this horrifying saga of deceit, greed, and human destruction. Her use of dialogue and description move the story along at a rapid pace, much like good fiction does. The book reads like a Robin Cook medical thriller and should be on every American’s bookshelf—particularly now as debates swirl around national health care and the solvency of Medicare.