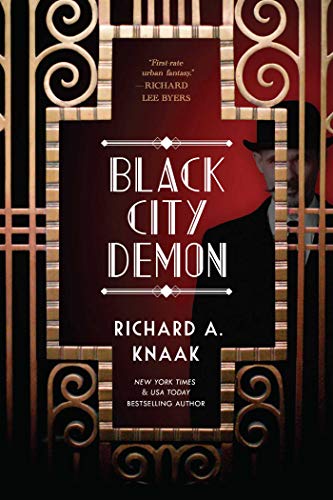 "I'd failed her. I'd promised to keep her safe and I'd failed her. Now, I could do nothing but stare down at her grave again and murmur a prayer in which I only half-believed."

The opening line of Richard A. Knaak's second novel in his urban fantasy series featuring his immortal protagonist, Nick Medea, would make a reader think that once again, urban fantasy meant paranormal romance. Except, unlike so many of the novels in the genre, Knaak is able to keep romance and love as a central theme, one might say the central theme, without devolving into the diem a dozen Lifetime movie of the week ripoffs that fill the bestseller lists.

Nick Medea has been the guardian of the Gate, a portal between the human world and the world of Feirie, for over 1600 years. It has not been the best gig for him. Once known as Saint George, Nick has been cursed with the soul of a dragon living inside him side by side with his own soul. While having that kind of power can be beneficial when called upon, it also has its drawbacks. Such as causing the Great Chicago Fire and opening the Gate to the evil Wylds of Feirie.

But the Gate is closed and Nick has new troubles. Set in 1920s Chicago, which is also refreshing since so many urban fantasy novels are set in modern times, it takes place when Prohibition is in full swing and gangsters rule the city. Nick has to navigate the turf wars and violent vendettas that the city's gangs are waging against each other.

Which brings into the picture a new evil that is more dangerous than even the power that Nick weilds and struggles to keep bottled inside himself. This evil is taking advantage of the chaos, the violence, the rash of murders, and the Wylds that either have slipped through before the gate closed, or perhaps have found a different way into the real world.

Nick and his shapeshifter sidekick, Fetch, have to race to keep not only themselves alive, the city of Chicago alive, but yet another reincarnation of Nick's long lost love from his time when he was blissfully mortal.

Knaak has a gift for the language of the era while also making the novel feel timeless and fresh. He keeps the tension high and knows when action is needed and when mystery is better suited to move the story along. Descriptive without being boring, Black City Demon is a great addition to Knaak's 1920s Chicago world where men are men, dames are dames, and demons, faeries, and ghosts lurk just around the corner.