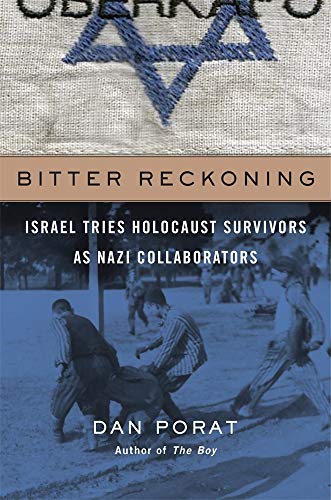 “if we are to judge those who collaborated with Nazis, we must deliberate upon their dilemmas in order to deepen our own definition and sense of humanity.”

From 1950–1972, Israel held numerous trials to prosecute individuals for crimes committed against Jews in Nazi-occupied Europe. In many cases, the accused were themselves Jewish. They turned against their own people, controlling and managing Jewish prisoners of Nazi Germany. These included members of the Nazi-controlled ghetto police, concentration and death camp bureaucrats and barracks managers (kapos).

This collaboration with Germans existed in cities and ghettos, within Jewish committees; among the various Judenrat (Jewish leadership groups appointed by Nazis); and in Nazi concentration and death camps. In most cases, the accused aided the Gestapo, the SS and various Einsatzgruppen units to expose Jews in hiding. As kapos in the camps, they administered the fierceness and brutality of Nazi persecution. They observed at the least—and participated in at the most—the starvation, brutality and genocide of their own people, sometimes their own families.

Who were these Jews who collaborated? Why did they help Nazi Germany? What motivated them? Why didn’t they resist? What type of court or criminal justice system is appropriate to handle such cases? The answers are many and not always the focus of this author, whose task is to uncover the motivations and behaviors of Israeli judges and prosecutors. Author Daniel Porat examines the Israeli legal system extensively to determine why some collaborators were imprisoned and many others appeared to escape justice.

Nazi Germany brought about the ethical breakdown not only of the German people, but also among many of the leading citizens of Europe. They employed propaganda to blame Jews for European suffering. The repercussions against Jews became unimaginable.

Nazi leaders demanded that leading members of the Jewish community, including elder Jewish statesmen, assist in their process of controlling and annihilating the Jews of Europe. They were used to move their own people into ghettos, camps, starvation, sickness, a firing squad, and the final fetid train ride to gas chambers in Nazi death camps.

The archives of these trials were kept secret by the Israeli government until adoption of the Freedom of Information Act in 1999. Even then, only some archived records have been released. To this day, Yad Vashem closely guards these files, granting only a handful of researchers access.

Dan Porat judiciously reviews the records of 40 such trials in which Jews were accused of aiding Nazis, focusing in particular on eight trials that illustrate the struggle to determine guilt in mitigating circumstances.

Bitter Reckoning presents information prudently gleaned from these reports, in particular the testimony and depositions of Holocaust survivors who were in a position to view the accused at the appropriate time and place in history. Porat’s writing is smooth and deliberate, delivered with integrity. His analysis of prosecutor and judicial motivations, especially within the trial records kept by judges and justices, is masterful.

In 1950, Israel’s governing body, the Knesset, passed the Nazi and Nazi Collaborators Punishment Law, which set the kapos trials in motion. But as time passed, the Israeli courts became less obdurate in their approach to the accused. Many judges felt that they were incapable of passing judgment as they had not experienced the Holocaust themselves. In other cases, witness confabulation reduced the efficacy of their testimony. Holocaust experiences were sometimes described very differently by diverse witnesses.

At first, in 1950, Jews who had willingly served the Germans were seen as equivalent to Nazis. A few years later, the defendants became viewed with more disappointment than anger.

In the next phase, from 1952–1957, kapos were no longer tried as Nazis, but as collaborators. Many severe sentences from earlier trials were overturned and prosecutors removed the death penalty. Charges of war crimes and crimes against humanity were dropped. Only Nazis, not collaborating Jews, were subject to the death penalty.

The Israeli public increasingly asked how the state could judge camp inmates, when the prosecutors and judges had not experienced the Holocaust themselves. Porat suggests that these trials would have been more appropriate for honor courts, rather than the Israeli criminal justice system, whose unbending rules made it difficult to reach a viable conclusion.

The third stage, from 1958–1962, saw the accused as people who acted badly, but from good intentions, such as when they were promised good things for their family as long as they cooperated with Nazis. After this, there were far fewer convictions and fewer sentences to prison. They began to be viewed as victims.

If, as some suggest, Jews walked into Nazi gas chambers like sheep to the slaughter, then Jewish leaders and councils were often responsible for pushing them along. And Jewish police took orders from Nazi leaders, enforcing their brutality upon their innocent Jewish brethren. In the sense that many Jews cooperated with Nazi leaders, they certainly bore some responsibility for the horrifying results of the Nazi genocide against their own people.

Shortly after the war, there were honor courts in the DP (displaced persons) camps, mostly in Austria, Italy, and in Germany. Among camp leaders, mainly from Eastern Europe, the heads of the DP camps were established, and they ran these “courts.” They examined accusations of collaboration during the war, then declared innocent or guilty swiftly. These trials also benefitted from the Holocaust being fresh in witness testimony, far more accurately than years later in Israeli criminal courts, when witness confabulation became rampant. This also contrasts with the slow process of the Israeli criminal court system.

Honor courts had to avoid the image of vigilante justice. But most honor courts attempted to calibrate retribution to the nature of the crime. While the public viewed all functionaries as traitors, honor courts had a nuanced view of them. Punishment ranged from a reprimand to far worse punishment.

Usually, these honor courts had few statutes or laws to rely upon. It was difficult for panel members to determine the morality of behavior within the context of Nazi rule. Belonging to the ghetto police or a similar body was seen as a criminal act. They were appointed by Nazis and were supervised by Nazis. They performed the bidding of Nazi Germany, sometimes in a horrendous way, as they were responsible for imprisoning fellow Jews and rendering brutal physical reprimands that in some cases resulted death.

The extensive research by Porat lends considerable weight to why the Israeli criminal justice system was a poor choice as a vehicle of justice in this circumstance. Besides being slow and cumbersome, the courts lacked appropriate legal precedent for these crimes. Instead, Porat believes that a system of honor courts would have served justice much more fittingly. He invites us to view some collaborators as also victims of the Nazi crusade to annihilate Jews. In such a case, how can we define complicity or justice within a verdict?

Porat shows us that there were not only persecutors and victims during the Holocaust, but many prisoners who lived in the gray zone. This complicates the basic understanding of our existence as human beings. For if we are to judge those who collaborated with Nazis, we must deliberate upon their dilemmas in order to deepen our own definition and sense of humanity.