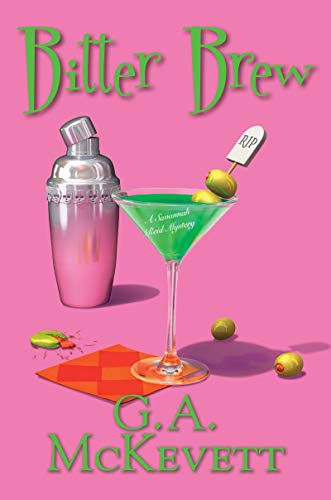 “As the 24th novel in this long-running series, Bitter Brew is a welcome entry in which Savannah Reid’s detecting skills shine.”

It’s bad enough to be awakened in the middle of the night by a friend, but having the friend be a coroner who admits to forging an autopsy report makes it a waking nightmare.

That’s what happens to P.I. Savannah Reid when Dr. Jennifer Liu appears at her home one night.

“Do you reckon this is the first time trouble has ever knocked on my door in the middle of the night?”
Jennifer gave a derisive sniff and half a smirk. “I suppose not. After all, you’re married to Dirk Coulter.”

Stricken with a fatal illness, Jennifer’s friend Brianne committed suicide, leaving two requests—for Jennifer to perform the autopsy, asking her to falsify the results to save her reputation. After much soul-searching, Jennifer complies, reporting that Brianne’s illness killed her. Now, however, she’s performed an autopsy on a second “suicide” who died the same way, and the doctor realizes she’s covered up murder.

Both Brianne and Nels Farrow were killed by a unique mixture of drugs that are very difficult to obtain.

“If I wanted to lie to myself, I’d believe Brianne and Nels died at the same time of a rare disease. They didn’t know each other, and it was a sad coincidence.” Tests showed Nels and Brianne were poisoned over a period of months so their symptoms would appear as part of their disease. Who commits suicide by degrees?

Because Savannah is married to Detective Sergeant Dirk Coulter of San Carmelita police department, she promises Jennifer to do her investigating as quietly as possible so she won’t have to lie to her husband about Jennifer’s involvement. Soon, however, events make that impossible.

Abruptly, personal problems hamper Savannah’s investigation. Dirk becomes distant and secretive. They’ve only been wed a year—could he possibly already be bored with married life? And what’s going on with her younger brother Waycross? Whatever it is, Dirk’s somehow mixed up in that, too, but he isn’t talking and fends away any attempt Savannah makes to find out.

Balancing marital woes and worry about relatives with her case, Savannah is finding more and more evidence that both Brianne and Nels Farrow were murdered, but by whom? And why?

Finding out is going to place Savannah’s life on the line—and the most important clue is a tin of coffee.

As cozy mysteries go, this one is chock-full of quirky characters as well as sinister motives. Every investigator in this particular mystery genre has, by necessity, some unusual personages hanging around, whether they’re family or otherwise. In Bitter Brew, Savannah’s family fully fits the bill for the former to perfection—there’s Granny, who believes home remedies will cure everything, the homeopathic the better, sister-in-law Tammy, mother of the baby niece Dirk and Savannah adore, brother Waycross (Southern readers will quickly recognize the names of brother and sister are Georgia towns)—and even a couple of adorable kitties.

Waycross’ “secret” is seeming merely added as a minor aside. Indeed, his problem is one so wide-spread the reader may feel it should’ve received more attention instead of seemingly mere “filler.”

Though the terminal illness in this case is a fictitious one, its ramifications in those afflicted are described as graphically as those suffered by victims of actual illnesses, and this parallel makes the story that much more realistic and its outcome more pathetic.

As the 24th novel in this long-running series, Bitter Brew is a welcome entry in which Savannah Reid’s detecting skills shine.

It has a touching plot and one with far-reaching consequences as a friend tries to carry out dying wishes and finds herself embroiled in murder. The well-drawn characters, especially those in Savannah’s family, add some down-home color that may have been transplanted from Georgia to California, but the familial love involved still rings true.