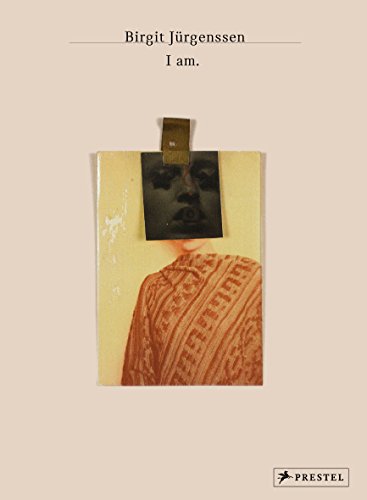 “I Am offers American art lovers the opportunity to discover and to relish the innovative work of a painter who deconstructed the old and constructed her own brave new world that was at once sensual and cerebral.”

Birgit Jürgenssen (1949–2003) is better known in her native Austria than she is in the U.S., though that is likely to change with the publication of I Am, a luxurious coffee-table book that offers hundreds of examples of her work as a painter and a photographer and 16 essays (mostly by British and European art critics) with provocative titles such as “The Woman Does (Not) Exist” and “The Rat in the Bed.”

The essays and the reproductions make a strong case for Jürgenssen as a major artist of the 20th century who deserves to be much more widely appreciated than she is now.

The essays tend to be repetitive; the authors express many of the same ideas over and over again as though they were unaware of what the other contributors might say. The critics also tend to overuse the word “oeuvre” as though it had some kind of magical properties.

Fortunately, this book is short on text and long on image. The essays are most helpful when they draw on Jürgenssen’s own comments on her work, including one in which she explained that she wanted “to reveal the typical prejudices and role models that society assigns women.”

In an interview with Maurizio Cattelan and Marta Papini—both of them Italians—Jürgenssen noted that, “art serves to stimulate other ways of thinking and to foster awareness.” The four-page biography at the back of the book also offers useful information.

In 1957, at the age of eight, Jürgenssen made copies of Picasso’s work in a notebook and signed them, “BICASSO Jürgenssen.” At 14, she began to take photos with her first camera. Later, she discovered movies, including the work of Alfred Hitchcock. It shows.

Early in her career, she set her sites high, and at the same time expressed a sense of playfulness and whimsy with language and with images. “Mrs. Churchill,” which tees off on the “V” for the victory sign, is hilarious as is a work that Louisa Buck calls “the hybrid mouse-vagina.”

Jürgenssen was obviously a feminist and an iconoclast, too. That’s clear from her work as well as from her own statements about art itself. “Be creative, refuse your role,” she exclaimed. She was more interested, she wrote, in “experimenting” than in “devising a brand.”

In that sense, she was Andy Warhol’s polar opposite, though they were near contemporaries who did much of their most experimental work in the latter half of the 20th century.

Jürgenssen was more intellectual and more academic than Warhol; for 20 years—from 1982 to 2002—she taught at the Academy of Fine Arts Vienna.

While her work is often conceptual, it’s also visually appealing and visually stimulating in part because it appeals to the erogenous and also because it can be very funny and even shocking. Her images of shoes play with fetishes, while images of masks can be ominous. Scenes of women performing housework are sobering in their simplicity.

A piece that’s called “Big Girl” depicts a large, young woman who carries a stack of books, and ignores a small man in a suit and dark glasses who stands on tiptoes, and who is still much shorter than she. It needs little if any commentary.

Indeed, many of Jürgenssen’s works are untitled. Viewers are offered the opportunity to interpret them on their own.

Yes, Jürgenssen expressed ideas. Yes, she was influenced by French intellectuals and surrealists, as the essays in this book argue. But as she herself noted, to gain “attention” an artist had to offer “an entertainment factor.” In that sense, she shares common ground with Warhol. They both touched a popular nerve.

When Cattelan and Papini suggested that Jürgenssen’s work was at a “cross-roads” between “acceptance of reality” on the one hand, and “resistance to official power” on the other, she answered neither with a “Yes,” or a “No,” but rather with a quotation from Mae West who said, “It is better to be looked over than overlooked.”

Jürgenssen’s work has often been exhibited in Vienna. In 2019, it travels to galleries and museums in Italy and Denmark. New York and Los Angeles can’t be far behind. Let’s hope. Meanwhile, I Am offers American art lovers the opportunity to discover and to relish the innovative work of a painter who deconstructed the old and constructed her own brave new world that was at once sensual and cerebral.