Bird in Hand: A Novel 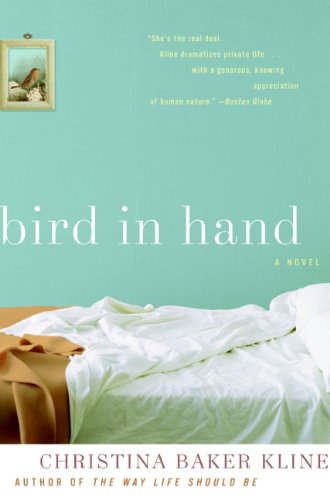 Full and proper character development appears to be becoming a lost art in fiction, but author Christina Baker Kline does her bit to revive the art in the intriguing novel Bird in Hand.  This is a fine story, extremely well told, of four people, partners in two marriages and very good friends.   We get to know all four characters and hear their stories—from their own perspectives—in this well-constructed tale.

The narrative begins with Alison whose life seems to be virtually perfect until two things happen.  First, she becomes involved in a deadly accident under the influence and the ramifications of this threaten to tear her world apart.  Second is something that she’s completely unaware of, which is that her husband is having an affair with someone she considered a friend.  Thus, her world changes overnight:  “For Alison, now, the world was a different place, and yet it was strangely the same.  She was present and not present in her own life.”

Kline writes with the same cool, suburban angst filled tone as Richard Ford (Independence Day, The Sportswriter).  There’s a question that is asked in Ford’s writing and in a Talking Heads song:  How did I get here?  “She walked around the silent house and looked at the framed photographs that lined the mantelpiece and cluttered the bookshelves, wondering, Is this really my life?  This collage of frozen moments, frozen in time.”

In Bird in Hand, we also meet Charlie, Alison’s steady if unfaithful husband; Claire, the newly published author and friend of Alison’s; and Ben, Charlie’s successful if somewhat dull and introverted husband.  It’s rare to find a work in which all four characters are so well fleshed out and, yes, real.  Here’s an example in how Alison describes Charlie:  “. . . as they started talking she realized that there was . . .  something in his character that she couldn’t pin down.  He wasn’t cocky, and his humor was gentle.  He had a mild confidence, a lack of self-consciousness, an ironic take on the world that wasn’t caustic or bitter.  Despite his social ease, he had a solitary air.”

At one point, Charlie describes Claire in words that could apply to the author’s style in writing this novel.  “She could be formal one moment and irreverent, even crude, the next.”

One of the ironies of reading Bird in Hand is that its fictional account of the disintegration of a marriage feels far more true to life than two contemporary accounts:  How to Sleep Alone in a King-Size Bed by Theo Pauline Nestor and Happens Every Day by Isabel Gillies.  I much preferred Nestor’s account, but neither narrator seemed as true to me as the character Alison in Kline’s work.

It may be because Kline gives us not just a story, but the motivations that spur on the individuals.  With Alison, it’s disillusionment.  “Nothing about her life at the moment was what she’d envisioned for herself when she got married.”  Alison’s husband Charlie is moved by the feeling that he’s made the wrong choices for himself.  “He was doing this because he could not keep skimming along the surface of his life without one day crashing into something hard and unpleasant . . . he was convinced he would get only one chance to feel this kind of passion, to express it, to live.”

And then Kline reveals that motivation, intent, means little or nothing because all humans act with incomplete—flawed—knowledge (quoting Alice McDermott):  “As if . . . what was actual, as opposed to what was imagined, as opposed to what was believed, made, when you got right down to it, any difference at all.”  So, ultimately, this is an impressive work about real, flawed, individuals doing the best they can at a certain point in their existence, making mistakes but ultimately moving forward.  “It was real life, the way things should be, and even as it was happening it felt to Alison like a distant memory, the moment already slipping into the past.”

A great deal of praise should be bestowed on author Kline for creating characters that adult readers can relate to. At one point in Bird in Hand, Kline writes of Alison’s experiences as a young woman, “It was a strange and magical feeling.”  Kline has delivered a strange, unique, magical, and borderline brilliant story.

Reviewer Joseph Arellano has worked as a government Public Information Officer and has done pre-publication review and editing work for a publisher based in England.  His book critiques have appeared in several publications including the San Francisco Book Review.