Big Girls Don't Cry: The Election that Changed Everything for American Women 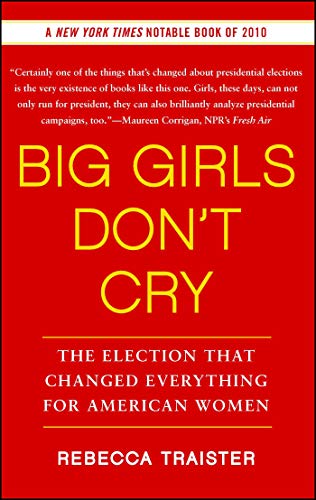 In Big Girls Don’t Cry: The Election that Changed Everything for American Women, Rebecca Traister follows key women involved in the 2008 Presidential election, to tell the story “about the country and its culture, how we all reacted to the arrival of these surprising new figures on the presidential stage, and what they showed us about how far we had come and how far we had yet to go.” She does an extremely good job of reaching that goal for most of us.

She observes that Hillary Clinton, who would put 18 million cracks in the highest, hardest glass ceiling, was “a prism through which the country’s attitudes about sex, power, and the place of women in society were going to be projected. It was impossible for Hillary Clinton to have chosen a path to the White House that bypassed the loathing, jeering derision and gendered stereotyping built on two centuries of male power. . . . As Clinton got closer to the race, a widely anticipated wave of resistance began to make itself apparent. This was the easy-bake misogyny of anti-Hillary men, but also of women eager to advertise their solidarity with and enthusiasm for traditional gender roles, like the one who entered a John McCain rally in Hilton Head Island, South Carolina, in November 2007 and asked the presumptive Republican candidate, ‘How do we beat the bitch?’”

While the extent of blatant misogyny unleashed by Clinton’s candidacy, particularly as expressed in the media, is well detailed by Traister throughout the book, it is done in a balanced way.

Further, Traister examines both Bill Clinton and Barack Obama in juxtaposition with their wives. She shows that each of these accomplished men values and fully respects his strong wife. Traister spoke with each of the Clintons on the question of Bill as a President’s spouse. “When I asked Hillary if she thought Bill would have a difficult time adjusting to secondary power, she said, ’I can’t imagine a better partner . . . this would be my presidency. Neither of us would expect it to be any different. But I will count on him to be there for me just as I was there for him.’” In the same vein, Bill told her how he would be proud to inherit the legacy of past presidential partners Eleanor Roosevelt and Hillary Clinton.

A quote from Paula Giddings portrays Obama similarly: “That Barack Obama would choose for his life partner a nearly six-foot-tall, incredibly smart, loquacious lioness of a woman told us virtually all we needed to know about his fundamental character—and the way he felt about us.”

While reporting well on women’s varying positions with respect to Hillary’s candidacy, Traister took no note the many non-misogynistic men in this country, men who saw Hillary as having more depth than Barack, who agonized about the choice as much as Traister did, and who supported Hillary’s run until they concluded that Obama had built much broader support across the country and had a better chance of being elected in November.

Traister etches well the strata of different generations of American women. A journalist just a bit ahead and yet very much of the blogging reporter style, she draws on and exposes her own intergenerational conflicts, including her adult dynamics with her mother. She does not venture to explore where her experience could not carry her—that is, to explore the intergenerational issues between adult sons and their mothers and/or fathers, and how those were manifest in political decisions.

Traister tries, as well, to show the range of perspectives within the African-American community about Obama. Her coverage of this topic, while strong, is not as crisply clear as her presentation of the gender issues.

A neat perspective on the interplay of race and gender is found in her quote from Melissa Harris-Lacewell, a black Princeton University professor: “Every time [reporters] would ask me ‘Are you going to support him because he’s black or her because she’s a woman?’ I wanted to call them back and say, ‘Why don’t you call the white guy and ask him, “Are you going to support her because she’s white or him because he’s a guy?’”

Traister recalls 1992 feminist delight with Clinton “when she marched into the White House with ill-tended hair, barren cookie trays and big ideas about health care,” and shows us why much of that support was not there 15 years later.

Traister, who had supported John Edwards until his withdrawal from the race, illustrates how Elizabeth Anania Edwards, who portrayed herself as the supportive homemaker in contrast to Hillary Clinton, had actually been very much in the Hillary mold. Traister smacks Elizabeth down, however, because “. . . she had enabled her husband’s deception [about his affair] . . . and she had thus taken an enormous risk with the well-being of the nation.”

Michelle Obama, reluctant to enter the campaign, and candid about her husband as "just a man" in light of some of the messianic expectations that greeted his candidacy, is “too awesome to be objective about,” says Traister, who saw how “Elderly white women in Iowa felt that they had more in common with Michelle Obama than they did with Hillary Clinton. Inhabitants of towns like the conservative rural Maine hamlet my; mother had fled and the Republican Pennsylvania suburb where I’d been raised were crowding into church basements to listen to a black woman with advanced degrees tell them to elect her husband president.”

On the Republican side, John McCain campaign manager Steve Schmidt and advisor Rick Davis had found Sarah Palin, saw her as a star, and a socially conservative one to boot. McCain met with Sarah Palin in Sedona, where “they took a walk by the creek, and spoke for an hour. After conferring briefly with his advisors, McCain offered Palin the job.” There were however, few women on McCain’s staff … none had been bought into the conversation about Palin . . . and there was no one to remind McCain that “his new running mate would have to meet a higher bar of expectation than a man would, or to weigh whether or not she was strong enough to clear it.”

Traister follows Palin’s implosion within the campaign. She reflects on Palin’s claiming to be a feminist yet not fitting most of the traditional feminist positions: “In this strange new pro-woman tableau, feminism meant voting for someone who would limit reproductive control, access to health care, and environmental protections”

Even though distanced by the McCain staff, “. . . Palin was becoming an ever greater sensation, with massive crowds of jubilant Republicans, many of them female, who had found her not only a candidate to cheer, but an icon of female political empowerment.”

At the same time, “Palin’s effect on female Hillary holdouts was the opposite of what McCain strategists had hoped. Her marked differences from Clinton prompted most of Hillary’s faithful to throw their Clinton bumper-stickered cars in reverse and back Obama with a panicked energy.”

In the final sections of the book, set after the election, Traister portrays Palin as an emergent force, particularly among Republican women seeing a new wave of feminism in which they could partake. Even though Palin opposed abortion even in cases of rape and incest, and had run “alongside a man who voted 19 times against increasing the minimum wage, who voted against the Violence Against Women Act and against funding for the Office of Violence Against Women, who voted against expanding the Family and Medical Leave Act and to terminate funds for family planning, these women [were] cheering on Palin’s vision in which personal empowerment had no correlation to progressive policy.” Jettisoning a woman’s right to control her own reproduction as a core feminist value, their singular core value was equal access and opportunity.

Big Girls Don’t Cry is extremely well worth reading, and I can’t wait to read what I hope will be Traister’s follow-up book in 2013.