Beyond Words: What Elephants and Whales Think and Feel 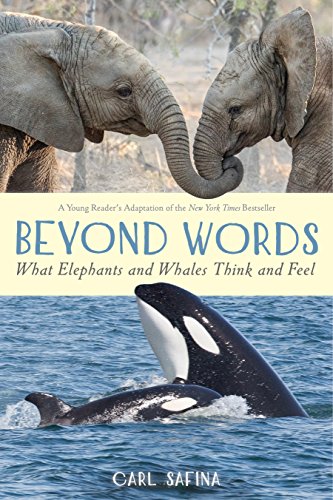 “Packed with extraordinary stories from the lives of elephants and whales that will entrance animal lovers of all ages, Beyond Words will enlighten anyone contemplating an African safari, a whale watching trip, or a family outing to a zoo or aquarium.”

Beyond Words: What Elephants and Whales Think and Feel is an adaptation for young readers of the New York Times bestseller of the same name by Carl Safina.

Safina begins with a short prologue that describes how the homing pigeons his father kept in the family's backyard led to an interest in understanding the inner lives of animals. To enlighten us on his chosen subject Safina takes us on a quest to two places where researchers are studying elephants and killer whales in their natural habitats.

In the first half of the book we visit field biologists who've been working with elephants in Kenya, sometimes for decades. Safina accompanies them on their rounds as they observe the lives of their subjects. Writing in an engaging, conversational, and often lyrical style, he tells story after story of the ways in which elephants interact with one another and with the world in which they live, as described by the researchers.

We learn that the basic unit of elephant society is a family group led by the oldest female, the matriarch, who “makes the decisions about where the family will go, when, and for how long . . . her personality—whether calm, nervous, firm, indecisive or bold— sets the whole family's tone.”

Safina pokes fun at the animal behaviourists who “were very careful to just describe what they saw, and not interpret too much . . . some started insisting that only humans have thoughts and feelings.” He likens this to people who ignore the evidence when their dog scratches at the door to go out and suggests they “have a mop handy.”

“Science is now confirming the obvious . . . animals . . . are frightened when they have reason for fright. And they feel happy when they seem happy.” Anecdotal evidence that animals are sentient beings is now increasingly supported by hard evidence. Brain scans of animals light up in just the same way that human brains do when feeling sadness, happiness, rage, fear, hunger, and thirst. And we share “the same hormones that create mood and motivation.”

Though Safina draws on multiple sources from a variety of animal species he doesn't mention the ground-breaking work of Jane Goodall. When Goodall began her pioneering studies of wild chimpanzees in 1960 she set a precedent by giving her subjects names rather than numbers. This simple shift in perspective enabled her to see chimpanzees as individuals with distinct personalities, interacting in complex ways with other members of their troop.

The team of researchers Safina visits in Africa have adopted Goodall's methodology by giving names to the elephants they study. One researcher—a native Masai called Katito Sayialel—can identify an astonishing 900 or more elephants by name. As a result, Katito and her colleagues are able see the elephants as individuals living in complex societies.

In the second half of Beyond Words, Safina describes time spent with Ken Balcomb, who studies killer whales from his house overlooking Haro Strait, across from Vancouver Island. His living room not only provides a view of whales traveling through the strait, but also allows him to listen in on their conversations via underwater microphones.

We join Safina and Balcomb on a boat ride out for a closer look. Like elephants, they live in female-led family groups but—unique to this species, so far as we know—both males and females remain with their mothers throughout life. Like ourselves, whales have complex social bonds and experience joy and grief. Occasionally they may even show compassion toward other species.

There are astonishing stories of killer whales guiding lost boaters back to safety and rescuing drowning dogs, stories that make it all too clear that the label “killer” is underserved. That is, unless you happen to be one of their prey animals. It turns out they are “surprisingly picky eaters,” often specializing in a single dietary item. In the Pacific Northwest, resident whales prefer to eat salmon while transient whales go after seals. Other populations favour sharks or, in the Antarctic, penguins.

In both sections of the book, after being entranced by heartwarming stories of benign and intelligent creatures, we're confronted with the heartless way in which we humans have treated them. Once you accept elephants as sentient beings it's impossible not to be appalled by the ivory trade. Poignant stories of whales trying to protect their young from capture and the subsequent suffering captives endure in aquariums resonate like accounts of the human slave trade. Safina doesn't skirt these issues.

When anthropologist Louis Leakey arranged for Jane Goodall to study chimpanzees he hoped her work would provide insights into human evolutionary history and behavior. Since then, it's been common for biologists to rationalize their interest in animals by saying it would help us understand ourselves.

Safina starts out with the same premise, but is forced to employ the reset button when he asks Cynthia Moss “What has a lifetime of watching elephants . . . taught you about humanity?” And she replies “I think of them as elephants . . . I'm interested in them as elephants.” He realizes that, though we have much in common with intelligent social animals like elephants and whales, it's really more interesting to contemplate what it's like to be them rather than how they are like us.

What's it like to communicate, not with words, but with “well over one hundred ritual gestures” as elephants do? What's it like to have “a great vacuum-sweeping, water-hosing, mud-flinging, dust-devilling, air-testing, food-gathering, friend-greeting, infant-rescuing, baby-reassuring caterpillar of a nose”? What's it like to use sonar to “see” with sound and be in vocal contact with family members spread out over 150 square miles? How is it possible for dolphins to understand and respond to a human trainer who asks them to “do something new”? Compelling questions like these stretch our intellect and imagination.

Liberally sprinkled with black and white photographs of elephants and whales, the text is rounded out with notes, a bibliography, and an index. Beyond Words is an excellent resource for the middle-grade reader interested in animal behavior.

Packed with extraordinary stories from the lives of elephants and whales that will entrance animal lovers of all ages, Beyond Words will enlighten anyone contemplating an African safari, a whale watching trip, or a family outing to a zoo or aquarium.