Beyond War: Reimagining American Influence in a New Middle East 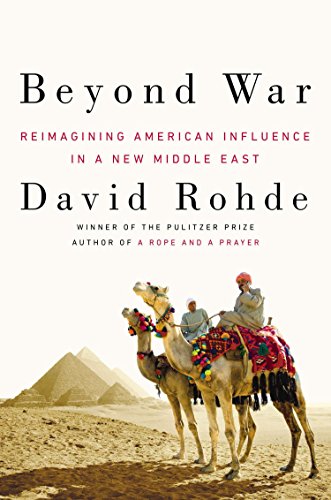 “The very rich contribution that a book like this makes, bringing together original ideas with detailed experience to back them up, can only come from an experienced foreign correspondent.”

There used to be a job in journalism known as the “foreign correspondent.”

This person lived abroad in a different country from where the publication was based and reported on doings in the place he or she lived. The point of having the foreign correspondent live in the place was, at least in theory, to build up a network of sources and get to know the venue intimately to then break news or offer telling analysis on matters concerning that place.

This practice has died.

According to a 2011 report in the American Journalism Review the number of full-time foreign correspondents employed by U.S. newspapers has declined steeply since 2003. But even when newspapers do actually have a person living abroad reporting foreign news, that person tends to have an absurdly large scope of responsibilities i.e. one person covering all of Africa, or Europe, or the Middle East.

This has not occurred only for economic reasons. The belief in the ability of a single correspondent to take a view on the news seems to have disappeared. Even The Economist, once a gutsy and intelligent journal of opinion, now writes its foreign news using a committee of a 20–30 “experts,” economists, analysts—the usual talking heads that journalists should really sort through. The result is that the outlet serves up the same common sense farrago we get everywhere else instead of original ideas.

We have, instead, analysis flying in the windows from all over the place. Even our most trusted sources of news now offer us a plethora of additional sources that we cannot evaluate in terms of reliability. Surely the scattershot foreign policy that has come out of Washington in the past 10 years is in part due to this lack of regular, reliable thought.

Let’s give an example, like the foreign correspondents of old used to do. Remember how the euro was going to disappear? Have you noticed that it’s still there? This should raise serious questions in your mind about what you’re reading on international economics.

Don’t worry, we have not forgotten that this is a book review, and here’s the point: David Rohde, a foreign correspondent of the old school, with years of experience covering Afghanistan and the Middle East, has written a book of profound, forward-looking policy analysis about how America might help bring peace to the region.

A great part of the value of Beyond War lies in the many years of observation that Mr. Rohde, a New York Times correspondent, has been able to make in the Middle East. Here’s what he offers:

“This book is an effort to describe a new, more pragmatic, and more effective American approach to the Islamic world. I believe that a more economic and less military oriented effort will achieve more than the invasions of Iraq and Afghanistan did. In some instances, drone strikes, covert operations, and lethal force may be necessary, but investment, education, and normalized relations are equally potent weapons.”

Beyond War’s enormous value lies in Mr. Rohde’s comprehensive knowledge not only of the region itself, but also of the actors in Washington (and around it on the Beltway) who have been involved in our efforts there.

Author Rohde spends a large part of the book describing just how entirely ineffective the $67 billion that Washington has spent on contractors in Afghanistan, Pakistan, and Iraq has been. There is a wealth of mind-boggling detail regarding this.

There is a similar plethora of detail when it comes to the analysis of economic and social conditions in Egypt or Pakistan. For example, in Egypt:

“Unemployment and soaring living costs have created a marriage crisis. In Egyptian culture, men must provide their wives with an apartment, but, for many young men that is increasingly difficult. Some analysts describe Egypt’s marriage crisis as a social time bomb created by the postponement of many disenfranchised Egyptian youth’s passage into adulthood . . . It is clear that what Egypt needs more than anything else is jobs . . . there is a desperate need for an American civilian aid approach in Egypt that is more effective than the post-Camp David effort. Egypt can end up like Pakistan, an unstable rump democracy dominated by a kleptocratic and paranoid military. Or it can follow the path of Turkey . . .”

There is a vast wealth of detail about Pakistan and Afghanistan as well. The book includes the clearest discussion we’ve read about why there is no solid opposition in Pakistan to the Taliban in Afghanistan. One gets a much better sense of the root of the instability that has caused the war effort to fail in Afghanistan thanks to Mr. Rohde’s comprehensive and intellectually coherent view of the subject.

Mr. Rohde argues that economic intervention is the only way for the U.S. to bring change to the strife-torn areas of the Middle East. “The goal should not be to hurl tens of billions of American taxpayer dollars at Tunisia, Egypt, Libya, and other countries. It should be to facilitate investment, education, and exchange over the long term. Doing fewer things over a longer period of time will prove more effective. Public-private partnerships, innovation, and revitalized civilian institutions are America’s way forward.”

The very rich contribution that a book like this makes, bringing together original ideas with detailed experience to back them up, can only come from an experienced foreign correspondent. The journalist, dedicating his life to a given place, brings together a skillset that few other professionals can apply. Surely the powers that be should consider bringing them back.