Beyond Home Plate: Jackie Robinson on Life After Baseball 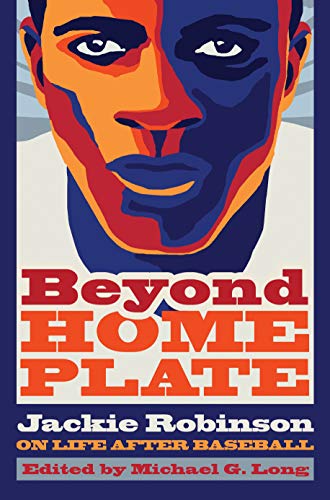 “What Robinson did on the baseball diamond was merely part of his effort to show black people how to be their very best and to show white people how to remove the barriers keeping blacks from reaching that goal.”

This book is a compendium of Robinson’s newspaper columns written for the New York Post and the New York Amsterdam News after his career was over and he could concentrate on race matters.

The image of Jackie Robinson the reader comes away with after reading Michael Long’s book is far different from the one you emerge with after reading a full-length biography like the well-respected Arnold Rampersad tome published in 1998, or even Jackie’s 2003 autobiography, prepared with the help of Alfred Duckett.

Although, according to Michael Long, Robinson had the help of a professional writer (whom he does not name) in preparing these newspaper columns, Robinson states unequivocally that the ideas and expressions in the columns are strictly his own.

And they do effectively convey the heartfelt sentiments of the retired player-turned-writer, sentiments that seem much more vehement about the need for civil rights than the impression of his views left by other books about him.

Mr. Long cleverly opens the book with an Introduction giving us the startling news that the Republican party claimed Robinson as a member. And Jackie’s columns prove this statement, showing that Robinson was attracted to Richard Nixon’s view of black progress Nixon expressed when Jackie spoke to him personally as well as repelled by Harry S. Truman’s remark that “the Negro should behave himself,” and disappointed by John F. Kennedy’s willingness to welcome Dixiecrats to the Democratic party.

But Robinson is more accurately described as an independent—as Mr. Long points out—because he assessed each politician on his merits when it came to that person’s stand on civil rights. His most negative assessment is for those politicians who asked blacks to “have patience.” He knew that meant the speaker would do as little as possible to advance the black race.

In these columns Robinson proves himself a careful observer of international relations as well as national events, commenting on Castro’s mistakes, Kruschev’s tactics, and Eisenhower’s embarrassing flubs.

But his usual theme is racial injustice, asserting that a gentleman’s agreement in the North was the same as a lynching in the South. Moreover, he reveals that he himself did not hesitate to take part in actions against discrimination, particularly those arranged by Martin Luther King, whom he respected deeply. His whole family took part in the Civil Rights March in August of 1963 during which they heard King deliver his famous “I have a dream” speech. And he tried to persuade middle-class blacks to become as involved as he was.

Robinson also criticized professional sports when he felt it necessary to do so, castigating professional golf for keeping excellent black players out of their tournaments and pointing out that the Boston Red Sox became the very last professional baseball team to hire a black player.

On the other hand, he continued to be devoted to his mentor, Branch Rickey, who showed the courage of his convictions when he hired Robinson as the first black player of the modern era.

Beyond Home Plate will open the eyes of fans who think of Jackie Robinson primarily as a tool for Rickey or even mainly a courageous and excellent baseball player.

Jackie Robinson was more than both of those things; he was a man deeply concerned enough about civil rights to bring his ideas to the public and to act on them himself.

What Robinson did on the baseball diamond was merely part of his effort to show black people how to be their very best and to show white people how to remove the barriers keeping blacks from reaching that goal.