The Better Sister: A Novel 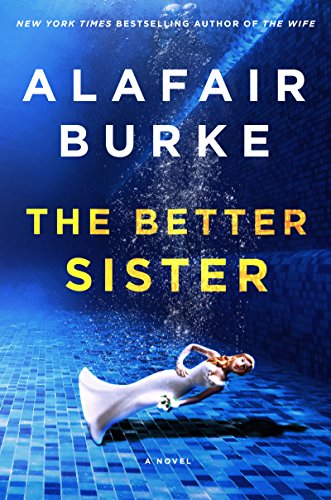 “Burke delivers a compelling thriller destined to keep readers waiting for her next book.”

Family relationships can be a real bitch. The dynamic between sisters is often complex, creating childhoods fraught with petty jealousies and bad behavior. But what happens when those bickering siblings grow up?

“I betrayed my sister while standing on the main stairs of the Metropolitan Museum of Art in a beaded Versace gown (borrowed) and five-inch stiletto heels (never worn again).” Thus starts Alafair Burke’s latest novel of suspense, The Better Sister, an investigation into how much we can be unaware of the lives and struggles of even our closest family members.

The Better Sister exhibits characteristics of domestic noir, thriller, and suspense all layered on top a good, old-fashioned whodunit.

Focused on her career, younger sister Chloe moves to New York and starts up the ladder in publishing. Older sister Nicky stays in Cleveland and runs into lots of trouble before she finally marries Adam and has a child.

Adam appears to settle Nicky down and help her turn her life around. But despite everything looking rosy for the troubled woman, things go downhill again. And when they do, Adam turns to Chloe for help.

“Now here we were, five hundred miles apart, connected only by a cell phone signal, and it was clear whose side I would take. Adam needed me.”

All of which sets the stage for murder.

Four years later, Chloe is married to Adam and living in New York with Nicky’s son Ethan. Ten years after that, Ethan calls Chloe “Mom,” and Adam is dead.

Then things really start to get complicated. Ethan is 16 and has no alibi for the night of Adam’s murder. And Nicky shows up to “help.”

Nicky the mess. Nicky, the sister with a string of criminal boyfriends. Nicky who lives in a constant state of drama. Nicky, who gave up her parental rights after almost drowning her son.

“Everything about Nicky is always bigger and louder than it needs to be.”

But, as with all good tales of domestic suspense, nothing is what it appears on the surface.

Nicky moves into Chloe and Ethan’s lives, and their apartment, after years of drug and alcohol addictions have kept her away, and the roles begin to shift.

Which woman is the best advocate for Ethan? What really happened between Nicky and Adam? And what family secrets are about to come to light in the hot spotlight of social media?

Burke structures her tale as a slow unwinding of the past. Some chapters take readers back to previous events, the first date for Chloe and Adam, the cracks in their marriage, the fights between father and son. As we learn more about the past, we also see how the characters shift and change in the present.

Interspersed with chapters from Chloe’s point of view, we get the perspective of the detectives investigating the murder, creating a patchwork of bits and pieces to help us put together the larger picture.

Regardless of whose head we’re in, Burke’s dynamic voice and page-turning storytelling compels the reader forward to find out where all the various threads will lead.

As those threads begin to coalesce into a single narrative, Burke’s characters discover not only the true details of the crime, but also their misunderstandings of the past. Through this process, they learn about themselves as well.

In addition to the powerful characteristics of a thriller, The Better Sister is also a psychological investigation of social media, gender in business, childrearing, and family ties. It forces the reader to analyze the meaning of success.

Through it all, Burke delivers a compelling thriller destined to keep readers waiting for her next book.