Betrayal on the Bowery: A Gilded Gotham Mystery 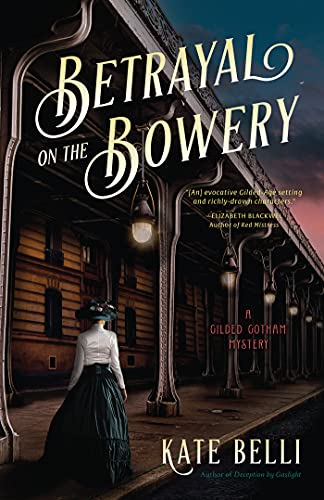 “Enough plot for two novels, so this single entry is crammed full of danger and hairbreadth escapes, to say nothing of the emotional tension still existing between the two amateur sleuths.”

Wealthy Bad Boy Daniel McCaffrey and socialite/journalist Genevieve Stewart are at the New York harbor to see their friends Rupert, Earl of Umberland, and his new bride, Esme, off on their honeymoon voyage.

A short time after the happy couple board the liner, however, a distraught young man rushes into their stateroom, cries out something about “demons,” and collapses. It’s Marcus Dalrymple, rejected suitor for Esme’s hand.

Before the police arrive, Daniel finds a mysterious coin in Marcus’ pocket.

“Only it wasn’t a coin, he realized with a start. It appeared to be cast in a baser metal than any currency he’d encountered.”

Detective Aloysius Longstreet is known for homing in on one suspect and shaping his theories to make that person look guilty. In this case, his suspicion falls on Rupert, who is arrested and jailed in the Tombs.

Since Rupert, despite his title, is a former jewel thief known as Robin Hood, and his arrest might lead to this discovery, both he and Daniel are necessarily alarmed.

“Daniel almost laughed. To think, just a moment ago, he’d actually entertained the notion that Marcus’s death could be straightforward. That he and Genevieve could interact in a circumstance that didn’t involve tragedy.”

In the meantime, Paul Riley, known to be a friend of Marcus’, also dies, screaming about demons as he throws himself from the roof of the Metropolitan Theater where Daniel and Genevieve are having lunch.

He also possesses that same mysterious coin, a souvenir of Boyle’s Suicide Tavern.

“It’s a horrendous place,” Daniel continued. “In recent years, unfortunate souls have begun to take their own lives, and the bar began to develop a reputation. If you can spend the night at Boyle’s and come out alive”—Daniel patted his breast pocket, the medallion nestled somewhere in its depths—“you get one of these.”

When Daniel and Genevieve are asked by shipping magnate Frank Westwood to find his wayward daughter Nora, who has eloped with an “unsuitable young man,” Nora is found to also have known Marcus and Paul.

Abruptly, the two find themselves with two mysteries to solve—where is Nora Westwood? And how does Boyle’s Suicide tavern figure in Paul and Marcus’ deaths?

A trip to an abandoned, reputedly haunted mansion once owned by a Confederate sympathizer, a night spent in a brothel, and a confrontation with the demon are only a few of the dangers facing the two as Daniel and Genevieve once again come face-to-face with an old adversary who is even more dangerous this time around.

For a short time, their budding romance must take second place.

In this second entry in the Gilded Age series, it is almost a year after Genevieve and Daniel’s adventures in Deception by Gaslight. After she spurned his marriage proposal, Daniel has avoided Genevieve because he can’t bear seeing her, considering how much he cares, not realizing that the fact he didn’t add “I love you,” in his proposal is the reason for her refusal.

Now more or less reconciled though still avoiding their mutual attraction, they meet to see the newlyweds off on their trip only to become immediately embroiled in another mystery.

This time around, there’s a haunted mansion, a red-eyed demon, a tavern where many people have died—it’s a triumph to emerge alive from a night spent there—as well as a missing heiress—enough plot for two novels, so this single entry is crammed full of danger and hairbreadth escapes, to say nothing of the emotional tension still existing between the two amateur sleuths.

Daniel calls on his Bowery gang-affiliations, while Genevieve uses her society and journalistic connections to aid them in their investigations.

There are enough references to people and events contemporary to the era, plus descriptions of Gilded Age New York City, adding in the manners and customs of the period to give the story an authentic feel, as well as the censures that society places on its members in general—shown by Genevieve’s occasionally less-than-acceptable behavior, as well as Daniel’s often slightly shady associations—and on females in particular.

At the end, there’s also a strong suggestion of hope for Daniel and Genevieve’s romance, as the two silently admit the danger they went through made each realize how they still feel. Words aren’t spoken aloud—not yet, at least—but the two are now headed in the right direction, as well as probably toward their next case.

Betrayal on the Bowery is a well-written second entry in this series, with enough excitement, danger, and a touch of humor that will undoubtedly leave the reader eager for the two’s next adventure to begin.