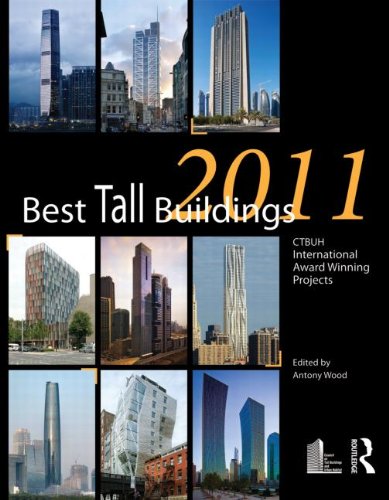 “By 2013 it is projected that a skyscraper will be completed in China every five days.”

Half of the world’s population of seven billion now lives in cities. By 2050, four and a half billion more people are expected to live in cities. Between the options of sprawl or density, tall buildings inevitably will assume an ever greater role in the built environment as urban development proceeds vertically rather than horizontally.

While China has one-fifth of the global population, it already accounts for a third of the tallest buildings—defined as 200 meters or more in height.

Best Tall Buildings 2011 is a compendium of information on the best of tall buildings constructed last year as recognized by the awards program of the Council on Tall Buildings and Urban Habitat.

It combines illuminating commentary on the major themes and evolving patterns of tall buildings, fascinating research concerning tall building patterns and places, and profiles of the form, features, and programs of a collection of leading highrise structures: 74 nominees, 10 finalists, and four winners selected from four regions of the world.

Consistent with the major market share of Southeast China in the global skyscraper market, some 40% of the 2011 competition’s 88 entries were from Australasia. Editor Anthony Wood observes that the spectacular recent skyscraper design and construction reflects “a level of design ingenuity . . . that suggests a significant amount of experimentation is taking place within the typology across myriad aspects: form-finding, façade treatment, materiality, internal communal spaces and strategies for natural ventilation.”

Tall buildings have continued to be the dominant real estate development form of the 21st century, notwithstanding two significant events that critics mistakenly asserted would spell their death knell.

First, the 2001 terrorist attacks destroying the World Trade Center were projected to have a chilling effect on anyone wanting to occupy a tall building, yet over the last decade many hundreds of such skyscrapers—each more ambitious in terms of design, vision, and height—have been produced.

As well, the global economic crisis of 2008 and subsequent years was projected to slow down tall building construction, just as happened in the 1930s Depression, but that has not been the case.

While 24 super tall buildings of 300 meters in height were built in the entire 20th century, in the first 11 years of the 21st century, some 60 buildings greater than 300 meters were constructed. This total will approach 100 by 2013—a fourfold increase over the entire prior 100 years in just 13 years. By 2013 it is projected that a skyscraper will be completed in China every five days.

Contradicting assertions that the era of the starrchitects’ convention challenging designs are a thing of the past, the projects profiled in The Best Tall Buildings 2011 evince “clearly the exploration of the sculptural-iconic skyscraper form is far from dead.”

At the same time there are other “projects which, partly through their significant height, are no less iconic in presence, but rely more on a subtle consistency of a single, elemental form, rather than a changing, organic differentiation.”

Addressing the imperative of viewing sustainability not just in physical terms through considering the building in isolation, Mr. Wood writes, “But there is, of course, another side to this equation: the consideration of a building’s greater contribution to society beyond delivering floor area and reducing energy expenditure.

What do interesting building forms bring to our cities in terms of beauty or impact on the human senses? Do we want to live in a world full of ultra-energy and cost-efficient, but rather dull boxes? What about the impact on social sustainability and urban diversity and a whole range of other, less quantifiable aspects of sustainability?”

The editor astutely observes, “The sustainability discussion in recent years has been focused almost exclusively on operating energy, which, while vitally important, has resulted in the neglect of a sufficient discussion on the implications of embodied energy in building construction.

“Notwithstanding great strides . . . in the reduction of operating energy…the energy expended to create building forms in the first place is by no means constant across buildings, with iconic-sculptural forms clearly requiring more material gymnastics (and hence more carbon expenditure) to deliver the same quantity of floor area as a more regular form.”

In addition to high standards of excellence and quality for the project, “the site planning and response to its immediate context must insure rich and meaningful urban environments.”

Providing an illuminating, informative, insightful commentary on an all too little recognized phenomenon that is reshaping our urban places, this volume combines rich visual images: dramatic pictures, renderings, and floor plans, as well as building profiles and statistics with descriptions of and commentaries on the buildings.