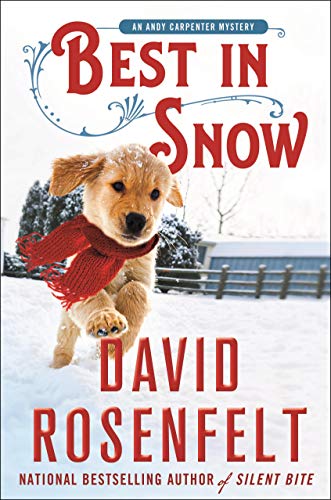 It’s always risky for readers to enter a series late in its development—in this instance, book 24 in the Andy Carpenter mystery series. You never know if you’re going to be confused because you don’t have enough backstory to understand what’s going on, or if the author is fizzling out after two dozen books, or if they’re progressively building muscle and the latest is the greatest.

Happy to report: No worries. This book shows muscle and finesse. For new readers, it stands alone just fine and is a great introduction to the series. For established fans, it’s another delightful addition to the ongoing story.

In Best in Snow, set during the winter holidays, Andy’s newspaper crony Vince asks him to help an employee he likes but had to fire because of an exposé that proved to be false. Vince had approved the piece, and both he and the reporter, Bobby, were astounded by the negative outcome. Both are even more astounded when the subjects of the exposé are murdered, and Bobby is framed for the crime—in an airtight case against him.

Andy, at first not sure his client is innocent, soon becomes convinced he is (aided by an attempt on Bobby’s life while in the hospital). So he starts from scratch to imagine an alternative scenario, then to dig up evidence enough to sway a jury. For help he calls upon his team of friends and colleagues, a mixed bag of oddballs and straight-shooters, including his partner, Laurie—a former cop and investigator—and best pal, Pete, an active cop who happens to be on the case; plus a quartet of octogenarian Jewish data miners fondly dubbed the “Bubeleh Brigade.”

One would not expect pet dogs to be players in a crime investigation, but the cover of this book and the rest of the series signal clearly that dogs are important. In fact, from the covers alone one would expect this series to be cute, cozy mysteries with an amateur sleuth whose animals contribute to solving the crimes.

Not so here. The author is a serious dog lover and rescuer, and he weaves dogs into his character’s life in parallel with his own without presenting them unrealistically. They form part of Andy’s domestic world and support team, while also helping to reveal his personality and values.

And, indirectly, they contribute to Andy’s professional work. He says: “When faced with a dilemma like this, one that requires clear thinking and decisive action, I do what I always do: I walk the dogs.”

His dominant dog, Tara, is the party who found the first body, buried in snow, during a walk in the park. That alone was enough to draw Alex into the case. His professional involvement is what changes the story from what seems at first to be a cozy whodunit into what becomes a courtroom drama.

When Alex has done what he can to save Bobby, “I head back to the defense table; my legs feel like they are made of concrete. This is the worst feeling of all, and I experience it in every case.

“It’s over. It’s done. There is no longer anything I can do; it is totally out of my hands.

“It is a lack of control and fear that I did not do enough that literally leaves me nauseous.

“This is why I have been trying to retire.”

In contrast to the story’s serious moments, it provides much snappy dialogue among Alex and his associates. This repartee falls short of being wiseacre, thus adds an amusing, sometimes acerbic, tone as the story canters comfortably along.

While Alex constructs his case, readers learn about his city, his interest in sports, his ambivalence about holidays, and how the law works. These details are tidily woven in, building character and plot without distraction. The pace never relents, yet the narrative doesn’t feel rushed.

Overall, the book is well constructed and carries readers along in an interesting story populated with interesting, likable characters, wryly drawn. A solid introduction to a solid series, which, happily, this author keeps on coming at a steady pace.