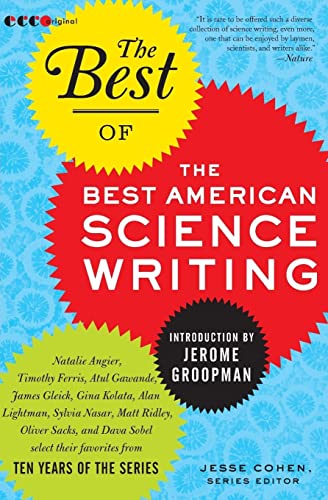 “Each author has in common a sense of wonder and amazement. All articles are short, 5 to 20 pages, and each is a potato chip, you can’t read just one.”

The articles in this compilation are each wonderful, amazing, excellent. . . . How many superlatives can I use? The editor’s foreword provides an exemplary sample of what’s contained within: “Science writing isn’t always easy to define, because it comes from many different fields, angles and experiences. Sometimes the science is overt, sometimes subtle, an essential backdrop to a larger human story.”

Each author has in common a sense of wonder and amazement. All articles are short, 5 to 20 pages, and each is a potato chip, you can’t read just one. All are tributes to the keen editorial eyes and ears of the editors, Rebecca Skloot, Floyd Skloot, and Jesse Cohen:

“The Mess He Made” by Michael S. Rosenwald: A writer who is also a hoarder seeks professional help and becomes a “specimen” at an advanced seminar.

“What Broke My Father’s Heart” by Katy Butler: A heartrending story of what happens when the heart outlasts the brain.

“Mother Courage” by John Colapinto: When muscular dystrophy is diagnosed in her sons, a mother turns into an advocate, leading to the 2000 MD Care Act.

“Hot Air” by Charles Homans: An investigation as to why many TV weathercasters reject global warming.

“The Singularity” by Carl Zimmer. (First published in Playboy—for those who actually read the articles): The “Singularity” concerns the possibility of transferring your mind into a computer. By the end of the article it doesn’t seem so crazy.

“Deep Secrets” by Julia Whitty: An examination of the recent oil spill near Louisiana. This was my personal favorite. What we didn’t know about the gulf environment before the oil spill we may never know if the environment’s destroyed.

“The Estrogen Dilemma” by Cynthia Gorney: A look at the benefits of estrogen for brain, heart, and bone health as compared to the risks of cancer. The author takes part in a clinical trial.

“The Animal-Cruelty Syndrome” by Charles Seibert: The detection of animal abuse is an indicator of violent behavior and crime.

“A Soft Spot for Circuitry” by Amy Harmon: A look at robot pets as companions and therapy in nursing homes and hospitals.

“Cary in the Sky with Diamonds” by Carl Beauchamp and Judy Balaban: Before being outlawed, LSD was given as a prescription drug. Between 1950 and 1966, 40,000 people would be tested or treated. One such patient was Cary Grant.

“The Longest Home Run Ever” by John Brenkus: The science of baseball.

“Professor Tracks Injuries with Aim of Prevention” by Alan Schwarz: A study of head injuries in sports, not just football.

“The Trouble with Scientists” by Deborah Blum: The disagreement between scientists and popular science writing.

“Gut Bacteria in Japanese People Borrowed Sushi-Digesting Genes from Ocean Bacteria” by Ed Yong: A good read despite the title.

“The Data Trail” by Tim Folger: Climate change and a study of the ability of nature to adapt in the Sonoran desert.

“Nature’s Spoils” by Burkhard Bilger: Communal groups who supplement what they grow with dumpster diving.

“A Deadly Misdiagnosis” by Michael Specter: Fighting tuberculosis in the impoverished health care system of India.

“The Enemy Within” by Mark Bowden: A look at the inner workings of computer viruses, hackers, and cyberwarfare.

“The Convenant” by Peter J. Boyer: The conflict between religion and science, and the resulting political pressures on funding science.

“The Mathematics of Terror” by Andrew Curry: When mathematical analysis of human behavior is applied towards preempting terrorism, it also generates controversy.

This collection would make an excellent gift for the budding scientist or nature lover in your family—or why not treat yourself?