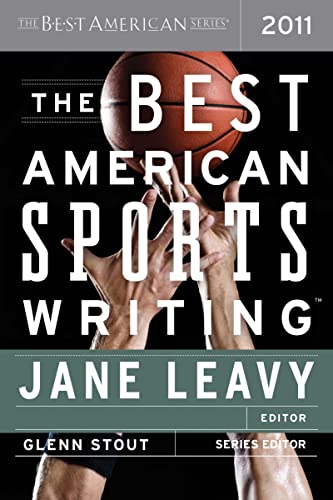 “Best American Sports Writing is a showcase for great writing and perceptive, under-the-radar stories about athletes and adventurers, the stench of a ‘bitches and ho’s’ sports culture run amuck, and the triumphs of dreamers and visionaries seeking to etch their names in the history books.”

Don’t judge a book by its cover. It’s the oldest cliché in the publishing world but it’s a particularly apt warning for Mariner’s 2011 edition of The Best American Sports Writing. Anyone who routinely skips the sports pages in their morning newspaper would take one glance at the generic photo of two hands reaching up for a basketball tip-off and conclude that the book is probably filled with tired recitations of the year’s most overexposed sports stories.

But contrary to what the uninitiated might expect, this series, now in its 20th year, isn’t about the year’s most noteworthy games or the likes of Tiger Woods, Lebron James, or Chad Ochocinco. Best American Sports Writing is a showcase for great writing and perceptive, under-the-radar stories about athletes and adventurers, the stench of a “bitches and ho’s” sports culture run amuck, and the triumphs of dreamers and visionaries seeking to etch their names in the history books.

The cover of BASW should have been a shot of Jason Moore, the homeless minister who believed he could use the wisdom of Peter Drucker to help him purchase an $18 million condo in the Trump Tower, featured in Wells Tower’s deliriously funny account of the Homeless World Cup soccer tournament.

“It’s not as big as it sounds,” Moore said, referring to the seemingly herculean task of moving from a homeless shelter to a luxury, four bedroom, six bath condominium.

Or if Moore’s mug was deemed to be insufficiently saleable, how about an image of Herbert Nitsch, the freakish Austrian diver we meet in chapter two, who snorts water through his nose in order to help him breathe underwater for nine minutes at a time?

Jane Leavy, the book’s editor, informs the reader in the introduction that series editor, Vermont-based, Glenn Stout “read more than 10,000 stories or so and sent 71 for my consideration.” Twenty-nine made the final cut from a wide variety of publications and sites including Harpers, Sports Illustrated, the Washington Post, ESPN.com, GQ, and Wired, to name just a few.

Ms. Leavy sets the stage for us to appreciate these well-written gems in an engaging introduction in which she lays bare the odd new reality of the sports writing genre: the rise of sports-fan bloggers and team-hired shills has blurred the line between real journalism and the filler that proliferates around the Web.

The low point of the book is a ten-page account of the final eight seconds of the U.S. Olympic hockey team’s overtime loss to Canada in the 2010 Winter Olympics, originally published in Sports Illustrated. Perhaps Canadians will relish reliving their win in this sort of excruciating detail, but as a passionate fan of U.S. hockey, it was a bit much for me to get through.

But after the eight seconds ordeal, the book kicks right back into gear with a trio of vital stories about sex crimes perpetrated by coaches and athletes against women. The first is a shocking ABC News investigation that uncovered that some 36 swimming coaches have been banned for life by the U.S.A. Swimming organization over the last decade due to sexual misconduct ranging from surreptitious locker room filming to outright physical abuse.

An essay by Washington Post columnist Sally Jenkins entitled, “Culture of Silence Gives Free Reign to Male Athletes,” is one of the highlights of the book, and without question one of the most thought-provoking sports opinion pieces of the year. Jenkins condemns the out-of-control jock culture that turns a blind eye to the abuse of women, and pins the root of the problem on “the excessive celebration and rewarding” nature of sport, “the binge drinking, women-as-trophies, the hubris resulting from exaggerated entitlement and years of being left off the hook.”

Selena Roberts’ story on a high-school cheerleader whose school tried to force her to cheer for a basketball player who raped her read like a work of fiction: Who could believe that school officials could be so incredibly ignorant and callous? It happened not in 1809, but at Silsbee High School in Texas, circa 2009.

A story by Will Shaikin from the Los Angeles Times on Vladimir Shpunt, a 71-year-old Russian psychic who was paid six figures by the McCourt family to channel positive energy to the L.A. Dodgers is a terrific read—unless you’re a Dodgers fan. After the 2005 season, Shpunt’s de-facto manager, sent an email to the McCourts underscoring Shpunt’s value, despite the fact that the team had completed a 91-loss season.

“V believes that without his help this team would have lost about 15 more games,” he wrote.

There were also a few stories in this collection that failed to hold my interest: a long story about a “mustang makeover contest,” and a lengthy rumination on ears. But for every story I wanted to skip, there were a dozen I couldn’t put down.

My only advice for Best American Sports Writing 2012: a cover with a little soul.