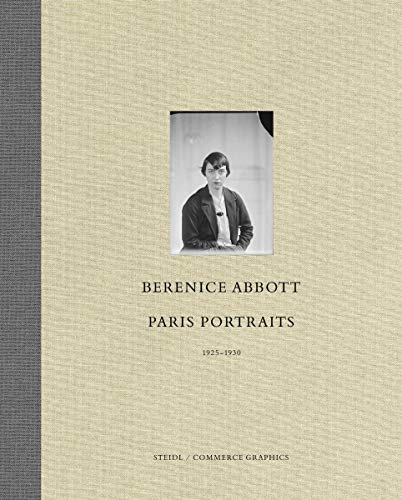 American photographer Berenice Abbott’s images of 30s New York architecture made her one the most influential photographers of that era. In a career that spanned 60 years, Abbott was also renowned for specializing in science photography and for inventing photographic equipment that became standard gear in the industry. Steidl is releasing a series of photography books focusing on different aspects of Abbott’s career, the first of which is Berenice Abbott: Paris Portraits 1925–1930, a pristine collection examining the first phase of her career as a portrait photographer

In the 20s, Abbott was adrift studying sculpture in Germany and France when she met famed photographer and filmmaker Man Ray through a mutual friend. Ray needed a studio assistant, and Abbott took the job. Ray taught her darkroom basics and her first photo was shot auspiciously from Ray’s Paris studio balcony. As editor Hank O’Neal notes in the book’s introduction, Berenice was a “natural from the start.”

Her early success came at the cost of her artistic association of Man Ray, and she soon moved to her own studio with the backing of arts philanthropist Peggy Guggenheim. Guggenheim is pictured with her daughter Pegeen, in a series of lustrous portraits.

Abbott was a pioneer in a male dominated art form in the early part of the 20th century. She documented part of the storied lesbian society in Paris of the 20s, and her photographs of such gay luminaries as New Yorker writer Janet Flanner (at a costume ball) and Djuana Barnes are indelible images in gay culture. “I was much more interested in spontaneity and didn’t want to fool around . . .with mechanics that might make a sitter uneasy or bored,“ Abbott said.

She photographed dozens of luminaries from every walk of life who were in Paris during the fabled 20s, many American expatriates and international artists including Japanese/American sculptor Isamu Noguchi, who collaborated famously with choreographer Martha Graham, and political figures like French Prime Minister Andre Tardieu, whom Abbott photographed on three occasions.

Her sardonic shots of enfant terrible Jean Cocteau has him pointing a pistol at the camera, then in bed with an eerie mask as his companion. Among Abbott’s most famous portraits of this period is a series with James Joyce, later used for covers of his books.

One wishes that the editors included more text about the photographer and her subjects, but this is without pause a carefully curated exhibition. Steidl’s transfers from the glass negatives are reproduced in the original sizes, on high-grade matte plates and flawlessly reproduced in this book. The pages include Abbott’s finished portraits and the uncropped versions, which may seem redundant, but show Abbott’s sensibility not to manipulate the shots after the fact. The comparisons underline Abbott’s subtle and distinct eye, her purist approach, how she captures an essence of her subject in the moment- their physicality, their truth, in an era full of artistic revolution, freedom, and promise.