Benedict XVI: A Life: Volume One: Youth in Nazi Germany to the Second Vatican Council 1927–1965 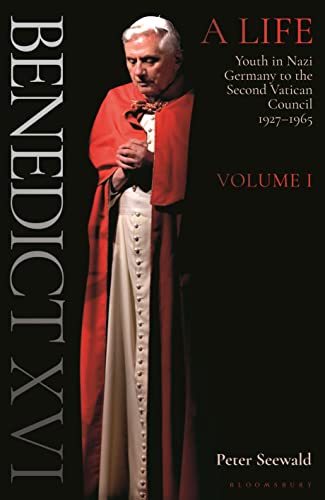 “Volume 1 of Seewald’s revealing biography covers Joseph Ratzinger’s life from his birth during the last years of the Weimar Republic through the rise of Nazism, the Second World War, the division of Germany in the postwar world, to the Second Vatican Council.”

Pope Benedict XVI was head of the Roman Catholic Church from April 19, 2005, until his surprise retirement on February 28, 2013. He is now Pope Emeritus. Born Joseph Ratzinger in Marktl, a small village in Bavaria, Germany, Benedict XVI rose to prominence by the strength of his intellect and his association with powerful church leaders. He was, writes German journalist Peter Seewald in his new biography of Benedict, “perhaps the greatest theologian ever to sit on the chair of St. Peter.”

Volume 1 of Seewald’s revealing biography covers Joseph Ratzinger’s life from his birth during the last years of the Weimar Republic through the rise of Nazism, the Second World War, the division of Germany in the postwar world, to the Second Vatican Council. Seewald interviewed a hundred contemporary witnesses, including Ratzinger’s friends and colleagues, and Pope Benedict answered the author’s questions “with angelic patience.”

Both Ratzinger’s parents, Seewald notes, “practiced a decent Catholic piety.” Religion was at the center of their lives. At age seven, Joseph Ratzinger wrote a Christmas letter to Jesus asking for a “Mass vestment” so that he and his brother Georg “could play at being priests together.” The brothers later both became priests and were ordained on the same day.

Pope Pius XI declared 1933 a Holy Year “in humble remembrance of Christ’s sufferings 1900 years earlier.” In January of that year, Hitler seized power in Germany, and Seewald explains that for Germany and the Church “the year of Jesus’ death became the death for justice and freedom, for faith, hope and love. It was a descent into the . . . darkness of death and terror, into an apocalyptic fury that was without example in human history.”

Seewald notes that Germany’s bishops at first publicly opposed the Nazis, but in a June 8, 1933 pastoral letter they welcomed what they termed a “national awakening.” The Protestant churches in Germany did likewise. On July 20, 1933, the Vatican signed a Concordat with the German Reich. The Concordat did not stop Hitler from persecuting priests and attacking the churches. Meanwhile, Hitler had already begun his attacks on Jews. The Vatican’s appeasement of Hitler was as ineffectual as Western leaders’ later appeasement.

Then in 1937, after German bishops met with Vatican officials, a Papal encyclical (With Burning Concern) was released in the German language that positioned the Church in opposition to the Nazis. Seewald notes that the Vatican’s shift to publicly opposing Nazism was largely the work of its Secretary of State (and future Pope Pius XII) Eugenio Pacelli. The Reich Interior Minister reacted to the encyclical’s release by arresting priests, closing Catholic schools and monasteries, and dissolving Catholic organizations and youth groups.

Seewald writes that Hitler’s goal was “to expel the Catholic Church completely from public life,” and Nazi oppression increased just as Joseph Ratzinger began studying at the episcopal seminary in Traunstein. Later, Cardinal Ratzinger reflected on those times by explaining that “There was no active resistance to the dictatorship [but] in . . . the older generation of teachers there was a spiritual resistance, which protected us from being poisoned.”

At the age of 14, Ratzinger was conscripted into the Hitler Youth. When war broke out, Ratzinger and other students were advised to avoid “politics,” and Ratzinger found refuge in books. He read Hermann Hesse’s Steppenwolf and Glass Bead Game. He also began to write.

Seewald describes Ratzinger as timid, shy, and physically unimposing. That outward appearance, however, masked an intense cerebral brilliance that Ratzinger would demonstrate as a student, teacher, theologian, bishop, Cardinal, and Pope.

In 1943, as the air attacks on Germany increased, young Joseph Ratzinger was assigned to an anti-air defense battery. His job was to “locate the approaching planes and pass on the readings to the guns.” Later in the war, Ratzinger guarded prisoners and was assigned to the infantry, but in the war’s last month he deserted by simply going home.

Seewald notes that in his memoirs Pope Benedict barely mentions his two years of war service, but the future Pope did write that he “seldom felt the beauty of home so strongly as on this homecoming from a world distorted by ideology and hatred.” When American soldiers arrived in his town, Ratzinger as a soldier became a prisoner of war. His captivity lasted 40 days.

Ratzinger and other German youth, Seewald writes, “returned traumatized from the war and had to come to terms with the fact that the greatest crime in human history had been committed in their name, the name of Germany.” Ratzinger’s experience with totalitarianism would have “an enduring influence on his career decision.” The future Pope Benedict—like another future Pope, a young Pole named Karol Wojtyla—saw “Catholicism as a bulwark of truth and justice against that Reich of atheism and lies presented by National Socialism.”

After being ordained, Ratzinger served briefly as a parish priest, but his future path was as a theologian. His model was St. Augustine who combined reason and faith in his search for God and the truth. His most important teacher was Gottfried Sohngen at the University of Munich, who Benedict later called “my Master.” Sohngen taught Ratzinger a “passion for truth and resolute questioning” that would be the hallmark of Ratzinger’s theological journey.

As a theologian and teacher, Ratzinger exhibited clarity, precision, confidence, and what Seewald describes as “the sharpness of his mind.” Students flocked to his lectures wherever he taught and listened intently to his sermons wherever he said Mass. And the hierarchy of the Roman Catholic Church took notice.

Both his studies and his experience of war and Cold War instilled in Ratzinger a belief in the imperfectability of man. In Nazism and Communism—the twin totalitarianisms of the 20th century—he saw the depths to which humans could descend when they turned away from God. “Ratzinger knew,” writes Seewald, “only God was perfect. And every human attempt to rise to perfection ended in disaster.”

Yet as the 1950s turned into the 1960s, people—especially young people—seemed to be increasingly turning away from God. Pope John XXIII sensed that the Catholic Church needed to confront and perhaps accommodate modernity, so he convened the Second Vatican Council beginning in October 1962. Joseph Ratzinger, as the key adviser to German Cardinal Joseph Frings, helped shape the Council and its edicts. The Catholic Church would never be the same again.

Seewald places the early days of the Second Vatican Council in the context of the Cuban Missile Crisis, which presented the possibility of global nuclear war and perhaps the end of civilization. Joseph Ratzinger understood the fragility of civilization and this was yet another reason for the Church to dialogue with the modern world.

Seewald’s first volume concludes with the closing of Vatican II and the hint that the future Pope Benedict thinks that perhaps the Council strayed too far from Church traditions. Ratzinger now set his task as defining the Council’s legacy. That story, alas, must await Volume 2.