Beneath a Ruthless Sun: A True Story of Violence, Race, and Justice Lost and Found 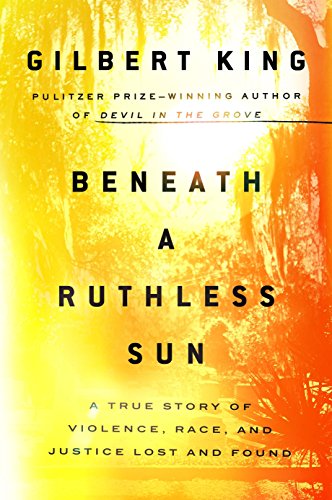 Racism in the rural, pre-Civil Rights South could sometimes be as perverse as it was brutal, as Gilbert King ably demonstrates in Beneath a Ruthless Sun: A True Story of Violence, Race, and Justice Lost and Found.

In this gripping tale, he returns to familiar, Central Florida turf—Lake County, the scene of a similar charge of interracial rape at the center of his Pulitzer Prize-winning Devil in the Grove: Thurgood Marshall, the Groveland Boys, and the Dawn of a New America.

Essentially a sequel, Beneath a Ruthless Sun takes place several years after the Groveland case. The new outing features two of the same central characters, the corrupt, racist Sheriff Willis McCall, and his main adversary, the crusading weekly newspaper editor Mabel Norris Reese. One is almost too bad to be true, the other seemingly too good.

The episode began in December of 1957, when a white woman, Blanche Knowles, wife of a local citrus baron, charged that “a husky Negro” had raped her in her bedroom. Since the Groveland case, Sheriff McCall had learned nothing. So in the wake of the reported assault, his instinctive and reflexive reaction was to have his deputies round up the usual suspects, which meant a dragnet of dozens of young black men living in the nearby “North Quarters” section of the small town of Okahumpka. Several were threatened, beaten, and nearly killed by police.

But since the Groveland case, Reese, the newspaperwoman, had evolved from an unquestioning racist to a woman who risked her livelihood—and her life—to campaign for justice. Inevitably, this meant taking on McCall. She succeeded in forcing the sheriff to release the uncharged, African American suspects. However, her efforts were rewarded with countless threats (many—but not all—anonymous), a fiery cross on her lawn and bomb attacks on her home and her paper’s offices. An informal advertising and subscriber boycott, plus the establishment of a rival weekly nearly drove her out of business. With her husband and partner Paul, she struggled to keep the paper alive, she wrote, “still aiming our sights on the word ‘justice.’”

This time, instead of settling on an African American suspect, McCall zeroed in on a 19-year-old, mentally impaired white man named Jesse Daniels, who worked as an occasional fruit picker in the groves. McCall framed Daniels and had him committed to the state insane asylum in Chattahoochee, a Bedlam-like hell hole, after a five-minute hearing, but no trial. Counterintuitively, the sheriff covered up compelling physical evidence that a local African American man had committed the Knowles rape. In this, King argues, he likely colluded with fellow Klansmen and local agricultural power brokers. McCall’s purpose in railroading the young white man was, Reese wrote, part of a “frantic effort” to protect “powerful citrus growers.” In this case, it was to obscure the stigma of Blanche Knowles’ being assaulted by a black man, which would have made her a “pariah.”

In 1960 Mabel and Paul Reese were finally forced to sell their newspaper, and the couple divorced. However, Mabel carried her crusade to free Jesse Daniels from the state mental hospital to the nearby Daytona Beach News-Journal. In 1971, after 14 years, Jesse Daniels was released, and the Lake County prosecutor dropped the still pending rape charges. Sheriff McCall was acquitted of murdering another jail inmate in 1972 but later that year was turned out of office by Lake County voters.

Following a Florida State Legislature investigation, the state Senate declared Jesse Daniels innocent of all charges, and awarded him $200,000, with an additional $30,000 for his long-suffering mother. The bill acknowledged that the state “has damaged him in a manner for which he could never be compensated and which could never be erased from his mind.”

The act also noted Mabel Norris Reese’s contribution: “But for the exhaustive efforts of a newspaper woman who campaigned for justice on behalf of Jesse Daniels, he would have languished in the criminal section of the Florida State Hospital, untried and unheard, in all probability for the remainder of his natural life.” Yet in the meanest of spirits, the state House of Representatives reduced Jesse’s award to $75,000 and rejected any compensation for his mother.

The most pernicious trope in Southern literature, repeated endlessly by Sheriff McCall, is also among the most durable: barbarous African American men lusting after pristine white women, to the point of rape. The 1915 film Birth of a Nation, which raised this specter, was credited with the revival of the Ku Klux Klan as a mass political movement. In 1939, on the eve of World War II, Gone with the Wind used the image anew.

Innocence notwithstanding, the interracial rape charge was frequently followed by a swift trial and execution, if not by lynching at the hands of a mob, often with the collusion or participation of law enforcement. Another Pulitzer Prize winner, Harper Lee’s iconic novel To Kill a Mockingbird, could easily have been set in Lake County.

There is a reason for the rape narrative’s durability: The literary tradition reflects a larger Southern reality. For more than a century, interracial sex was the region’s preeminent and incendiary wedge issue. But all too often it was not really about what it claimed to be, a defense of the purity and chastity of white women from the predations of black men, or the related fear of miscegenation.

What it was really about was preserving the political and economic power of white elites, as King so ably demonstrated in Devil in the Grove, and now again in Beneath a Ruthless Sun. In Lake County, that preservation meant ensuring a docile, low-paid labor supply to work in the citrus groves, melon fields and packing sheds, through intimidation or, if necessary, through racial terror.

Thus, in 1955, as King recounts in his new book, when progressive Florida Governor LeRoy Collins was considering commuting the death sentence of one of the two Groveland Boys who hadn’t already been murdered by law enforcement, Sheriff McCall protested. “Any leniency shown to a convicted rapist,” he wrote, “would only demonstrate that criminals can ravish our fair womanhood without proper and severe punishment.” Yet when Collins did commute the sentence, how did a hooded, KKK mob retaliate? By shooting up a union meeting of black fruit packers.

With narrative nonfiction like Beneath the Relentless Sun, an inevitable tradeoff exists. Readers are likely to find King’s novelistic prose gripping, and there are extensive, supportive end notes. Yet journalists of the old school may come up short at times when running into first-hand, atmospheric descriptions of events from the distant past, or the interior thoughts of long-dead characters who left no notes, letters  or memoirs. Such flourishes and well-informed imagingings can, as the lawyers say, run the risk of “assuming facts not in evidence.”

If King decides to return to rape charges and racial injustice in Florida a third time, he need only look a little further back into the state’s history. Despite its cosmopolitan image, between 1882 and 1930, the state had the highest per capita rate of lynching in the nation. And from 1924 to 1959, 37 African-American men—many of them teens—were executed in Florida for raping white women. The last was Sam Wiley Odom, who many in Lake County believed was the real rapist of Blanche Knowles, although he went to the electric chair for another assault.

Or, King could look forward. Central Florida is also where Trayvon Martin died, and where his killer was exonerated by a predominately white jury in 2013—the year Devil in the Grove won the Pulitzer. What did George Zimmerman think the black teen in a hoodie was up to in a gated, predominately white community?

For the past 45 years, Mark I. Pinsky has reported on racial justice and injustice in the South, from Joan Little and the Wilmington 10, to the Greensboro Massacre and Trayvon Martin. He is completing his latest nonfiction crime book, Drifting into Darkness: Murders, Madness, Suicide and a Death “Under Suspicious Circumstances.