Beneath the Mountain: A Novel 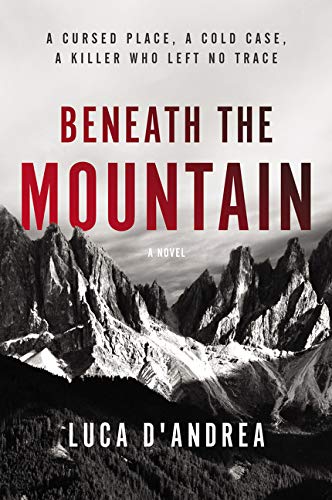 “D’Andrea’s story sweeps away the reader in an avalanche of life-threatening revelations that make Beneath the Mountain a complete success as a debut thriller.”

New York City native Jeremiah Salinger is one half of a hot-shot television documentary team on the way up when he decides to move with his family to the remote Italian village of Siebenhoch in the Alto Adige region of the Dolomites. Not long after settling in with his wife, Annalise, and his young daughter, Clara, Salinger reaches out to his partner in New York with a new documentary subject: the Dolomite Mountain Rescue team that operates in the area.

When Salinger, the writing half of the duo, fills in as cameraman for his partner on a routine rescue mission, he makes the fatal mistake of asking to be lowered into a crevasse at 3,200 meters to shoot additional footage while the rescue crew secures the hiker they’d come to assist. As he waits at the bottom of the crevasse, nearing panic, a sudden avalanche sweeps away the man being lowered to retrieve him and the helicopter to which he’s attached. Everyone dies, except Salinger.

As he battles severe depression, survivor’s guilt, and panic attacks in the months that follow, Salinger launches himself into yet another investigation after hearing about the brutal murder and dismemberment of three students in the nearby Bletterbach Gorge in 1985. His obsessive search for the truth upsets and infuriates the locals, including his wife, who grew up in the area, and her father, and yet being beaten up, cursed, and spat upon does nothing to slow him down. Who slaughtered these innocent young people, and why has the truth been covered up for so long?

Luca D’Andrea does a very good job in his debut novel of crafting a portrait of an obsessive mind trapped within a nightmare that refuses to end. Salinger is a character torn between his need to tell the next story and his responsibility to protect his wife and young daughter, and repeatedly he makes the wrong choice between these two opposing pressures.

D’Andrea also succeeds in giving readers a strong sense of the region, the tensions between Italian and Austrian influences, the insularity of the locals, and the incredible beauty—and terror—of the geography of the area. In particular, his references to the geological and paleontological richesse of the Bletterbach Gorge provide an effective counterpoint to the human secrets also hidden there.

The novel is rather slow to develop and is somewhat repetitive in the first two-thirds or so, but once Salinger finally penetrates through to the layers of the past that hold the truth of what happened in 1985, D’Andrea’s story sweeps away the reader in an avalanche of life-threatening revelations that make Beneath the Mountain a complete success as a debut thriller.