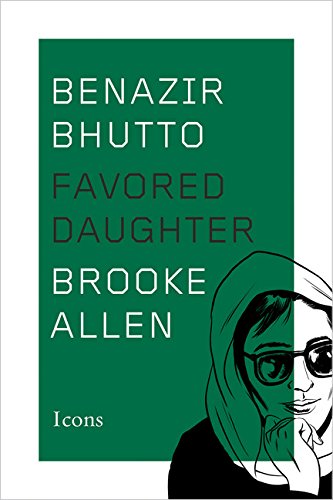 Brook Allen’s fascinating and succinct book is an easily understood recent history of Pakistan as well as a biography of one of its most famous leaders. At times it reads like a thriller, at others more like a page from a glossy celebrity magazine. But it is a riveting read throughout with bite-sized chunks of information presented in an easy to digest style.

Benazir Bhutto was seen as an “international symbol of youth, hope, and democracy” when in 1988, at the age of 35, she became prime minister of Pakistan and the first female leader of a Muslim country.

Many leaders have disappointed their electorates, the “war on terror” producing more than its fair share. But few have indulged in Bhutto’s industrial-scale corruption, and this in one of the most poverty-stricken nations in the world.

Yet this book, which also provides a valuable insight into the recent history of a little understood nation, exhibits at times an—albeit reluctant—admiration for this flawed but courageous and charismatic woman. By the last page, the reader will likely concur and wistfully ponder how different things could have been for a woman whose family rivals the Kennedys when it comes to politics and tragedy.

The daughter of the democratically elected prime minister of Pakistan, Zulfikar Ali Bhutto, Ms. Bhutto was groomed for her political destiny from the age of nine. The Bhutto family was an immensely wealthy, landowning dynasty, and she enjoyed a privileged childhood that was in many ways idyllic, despite her father’s renowned philandering. He was far from a devout Muslim and raised his family accordingly. Ms. Bhutto was the first of the Bhutto women to wear the dupatta  (headscarf) in what was a politically advantageous nod to Islam. Later a political rival’s wife would, however, describe her as a “kleptocrat in a Hermes scarf”!

Ms. Bhutto attended Harvard’s Radcliffe College and later Oxford University in England, where she became president of the Oxford Union, described by Allen as “the nursery of great British politicians like Gladstone, Macmillan, Wilson and Heath”—all British prime ministers in their time.

When she arrived in America in 1969, Ms. Bhutto was shocked to realize most Americans had little knowledge of her country. The fact that it was next to India, a popular haunt on the 1960s hippie trail, was the way it was generally landmarked.

Yet Pakistan was supposedly an important American ally, and this lack of recognition bruised her national pride. It wasn’t long before she would learn that most political allegiances are fickle animals, with the rise and fall of Pakistan’s importance to the west linked to its usefulness and significance of other nations, Afghanistan being a prime example.

Exposed to the machinations of politics and the adoration of a nation by her father, the less than gifted scholar soon blossomed from a giggling student to a commanding orator. Undoubtedly the attention bestowed on her by her father displeased her mother and her brothers, forces she would later have to contend with in both her political and private life. But the lure of political rallies with the adoration of crowds that could number several million meant Ms. Bhutto was hooked for life on the adrenaline of politics.

The overthrow of her father by a military coup and his subsequent execution in 1979 set her on the political trail in earnest, and she did not hesitate to use her years in the west and her many influential contacts at any opportunity. To the west and to Americans in particular, there was a sense that “what Benazir Bhutto wasn’t was possibly more attractive even than she was. She wasn’t a religious fundamentalist, she didn’t have a beard, she didn’t organize rallies where everyone shouts: ‘Death to America’ and she didn’t issue fatwas against Booker-winning authors.”

Benazir Bhutto served her country as prime minister during two terms in the 1980s and 1990s. They were crucial years and her presence on the international stage was far from a supporting role. These were times when there was a very real fear that the sour relations between Pakistan and its neighbor, India, could turn nuclear.

But she and her equally corrupt husband, referred to by most Pakistanis as “Mr. Ten Per Cent,” will ultimately be remembered by many for the disgraceful amounts of money they took out of their country, estimated to be between two and three billion dollars—and this in a country where people were starving.

Ms. Bhutto’s death in Rawalpindi in 2007 remains shrouded in mystery. Her motorcade was attacked as she addressed a crowd after a political rally. Against the advice of her security team, she stood with her head and torso through the open roof.

From the crowd a 15-year-old Pashtun boy called Bilal “fired three shots in the space of a second. After the second (shot) Bhutto ‘fell like a stone’ back through the (roof). Quickly after that the boy set off a suicide bomb.” Soon afterward, the scene of the attack was quickly hosed down and a government spokesman claimed Ms. Bhutto had died from a head injury sustained from hitting her head on a lever on her car.

As her country’s leader, Ms. Bhutto failed to address many of the dire issues and the inequality that her citizens faced. The endemic poverty continued to be a fact of Pakistani life and the feudal system “which had managed to hold firm through imperial, nationalist civilian, military and ‘socialist’ governments” was broadly unimpeded.

But throughout her life this “favored daughter of a very powerful father” showed courage and valor, and despite all her shortcomings she left in her wake “millions of Pakistani girls and women who look at her life, her determination, her perseverance in the face of all odds*” and thrill to the knowledge that “gender doesn’t have to stop them from achieving their dreams.”

One of those young women inspired by Benazir Bhutto is the Pakistani schoolgirl Malala Yousafzai, who paid the price for fighting for education for girls with a shot in the face, but survived and went on to win the 2014 Nobel Peace Prize. How humbling that one determined young lady has achieved so much while Ms. Bhutto wasted much of her power and influence in the pursuit of money and status.