Beirut Rules: The Murder of a CIA Station Chief and Hezbollah's War Against America 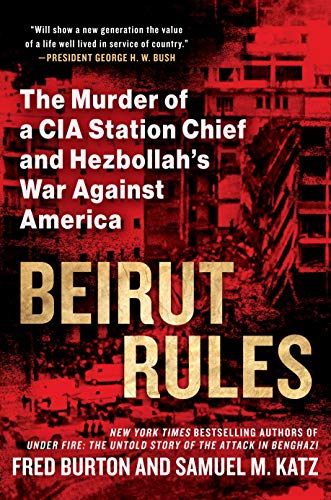 “More than anything else, this history serves as a timely reminder that Iran has been at war with the United States for over four decades.”

On January 3, 2020, the Trump administration carried out a targeted airstrike on Qasem Soleimani at the Baghdad International Airport. This move polarized an already politically divided nation. The most common (over)reaction was the series of memes and videos declaring the strike as the opening salvo of World War III. In reality, the killing of the overall commander of Iran’s shadowy Quds Force was part of a much longer war—a war that began when Iran declared the United States the world’s “Great Satan” in 1979. Since the Iranian Revolution of that year, Tehran has kidnapped and killed thousands of American citizens, and has also orchestrated deadly suicide bombings as far afield as Buenos Aires.

Beirut Rules by counterterrorism expert Fred Burton and author Samuel M. Katz chronicles one of the hottest periods in the long Iran-USA conflict, which began during the Lebanese Civil War in 1982. In that year, Hezbollah, an Iranian- and Syrian-backed Shiite army began carrying out a slew of “spectacular” suicide attacks on American, French, British, and Israeli targets in Beirut.

Prior to Hezbollah’s emergence, the main terror threat in southern Lebanon had been the Palestinian Liberation Organization, a left-wing nationalist movement composed of Sunni and Christian Palestinians supported by the Soviet Union. After being pushed into Lebanon by the Israeli army, the PLO used the multi-ethnic and multi-religious nation as a terrorist university. In PLO-run camps, “volunteers learned how to shoot, build bombs, evade the police, and hijack airliners.” These Lebanese camps drew in students from the IRA, the communist Baader-Meinhof Gang of West Germany, the Japanese Red Army, and various national liberation groups.

To counter this threat, the Israeli army invaded Lebanon in 1982. This set off a chain of events whereby the impoverished and politically marginal Shiite population of Lebanon was given cash, weapons, and training by Iran and Syria in order to strike against both the Israelis and the Palestinians. Beirut became the center of a large proxy war that drew in the United States.

On April 18, 1983, a Hezbollah suicide bomber destroyed the US Embassy in West Beirut, killing scores of CIA officers. That same year, on October 23, 1983, another Hezbollah suicide bomber attacked an American installation, this time the US Marine Corps barracks near the airport. Over 200 Marines and sailors died in the assault. A similar assault killed and wounded 100 French soldiers and airmen.

Beirut Rules lays out in clear language the fact that Hezbollah’s rise as one of the deadliest and most powerful terrorist organizations in the world came about because of Iranian support and training. As far as the US is concerned, Hezbollah has more American blood on its hands than any other terrorist organization barring al-Qaeda (which cooperated with Hezbollah a lot in the 1980s and 1990s).

Hezbollah’s agents, especially the vile Imad Mughniyeh, orchestrated not only suicide attacks on American targets, but also kidnapped US Marine Corps Lt. Col. William R. Higgins and CIA Beirut station chief William Buckley. Both Higgins and Buckley gave their life to patriotic service, from the rice paddies of Vietnam to clean halls of Washington. Both men were tortured and ultimately killed by Iranian intelligence officers and their Lebanese proxies. Mughinyeh, whose story makes up the majority of Beirut Rules, was at the center of all this violence.

Despite these declarations of war, the US would not enact its revenge on Mughinyeh or his minions until February 2008, when a joint CIA-Mossad action killed the terrorist with a car bomb in Damascus. This of course came after Mughinyeh and Soleimani had already killed thousands of US troops in Iraq with their IED and EFP campaign.

Beirut Rules is a heavily redacted glimpse into the sordid world of spycraft—the place where national honor has to share the limelight with prudent, but often corrupt bargains. This is a blood-soaked book, with American and Israeli actions described alongside Hezbollah and Iranian terror attacks.

It is also an eye-opening account of the Byzantine alliances and collaborations between different powers in the Middle East. For instance, although an American ally, Saudi Arabia is shown in here as an actor willing to cooperate with Shiite terrorists in order to keep its own Shiite population from becoming radicalized. The USSR also tried somehow to back both the PLO and Hezbollah, even after Mughinyeh’s armed thugs abducted Soviet diplomats in Beirut.

More than anything else, this history serves as a timely reminder that Iran has been at war with the United States for over four decades. Tehran plays the long game too, and before the January killing of Soleimani, the revolutionary state took a victory lap by launching a ballistic missile named “Imad,” as in Imad Mughinyeh. This should have served as a warning to the Obama administration then negotiating the Iran Nuclear deal, but it did not. Beirut Rules is a literary warning that Iran does not rest at all.