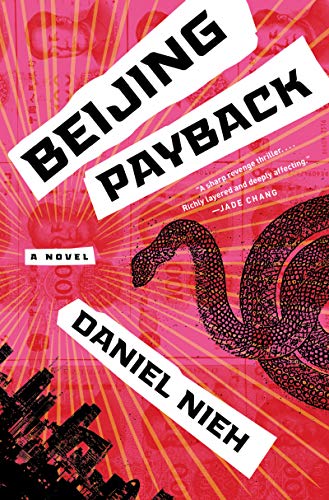 College senior Victor Li is an average, slightly underachieving son of an immigrant restaurant owner and his Caucasian missionary wife. Like many his age, Victor has two major interests: women (with whom he has terrible luck) and basketball (while he’s worked hard to become a serviceable guard on the school team, his 5' 9", 155-pound frame would barely bat an NBA scout’s eye).

But Victor’s complacent southern California existence is rocked when his father Vincent is knifed to death in an alleged robbery, and he soon comes into possession of a suitcase loaded with a cash, a Walter PPQ pistol, and a bunch of questions about his father’s past. Beijing Payback, a fast-paced thriller that jets from Los Angeles’s Inland Empire to the heart of Beijing and back again, follows Victor’s pursuit of the answers.

Told entirely from Victor’s perspective, the novel bounces from one predicament to another as he follows a bewildering trail of clues that draw him closer to his father’s dangerous associates, and secrets hitherto withheld.

The opening half of the book finds author Daniel Nieh in fine form as Victor’s view of his father as an honorable businessman slowly erodes under mounting evidence: the arrival of a shady restaurant manager and his hired thugs; a letter from Vincent to his son detailing tragedies and criminal operations dating back to the Cultural Revolution; and the sudden appearance of Sung, a young Beijing mob enforcer who claims to be Vincent’s protégé.

Soon enough, Victor is teaming up with Sung (who happens to be handy with kung fu and knives), tangling with criminals and putting his limited Chinese to use as he untangles an international conspiracy. Nieh’s punchy prose places us in Victor’s sympathetic shoes as he struggles with matters out of his depth, and his emotional reckoning with his father’s true identity injects humanity into the proceedings. Nieh’s utilization of the Asian American cultural milieu also adds flavor, such as when an unknown caller uses 8s and 9s in his phone number, signifying the Chinese obsession with those numbers as harbingers of good luck.

However, Beijing Payback loses its grip when the action relocates to Beijing. Aside from a few astutely observed street scenes, Nieh labors to communicate the feel of being in the gargantuan Asian metropolis. Victor is soon mired in swanky night clubs and gangster hideouts as the story’s central mystery gives way to standard thriller tropes: the fat-cat businessman, the kept mistress who becomes a love interest, the crooked cops who blackmail our hero into doing their bidding.

What was at first an understated thriller devolves into goofier, less plausible situations as Victor and Sung pass themselves off as hotshot Western gangsters, the confrontations grow ever more episodic and hyperbolic, and double-crosses accumulate. A final assault on a villain's skyscraper lair is straight out of a Hong Kong action movie, and about as realistic.

The novel rediscovers some of its footing when it returns to L.A. for a final twist and a more tempered conclusion, in which Victor’s hard-won knowledge comes with a cost. Leaving the door open for a sequel, Nieh clearly has the outlines of a grand gangster epic in his head, but the high ratio of clichés to cleverness prevents his novel from achieving full liftoff. Expect a few cultural grace notes and agreeable potboiler antics from Beijing Payback—just don't expect something truly original.