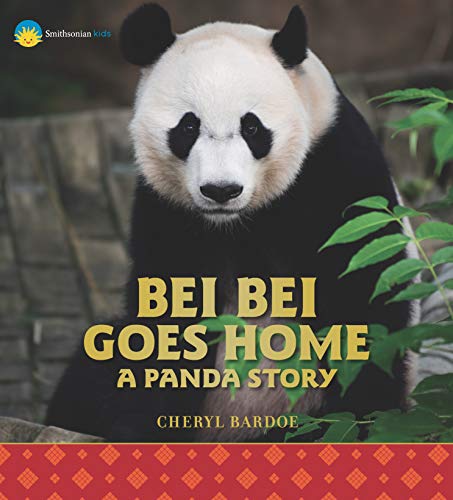 “As much a panda story as a panda program story, Bei Bei Goes Home tugs at the heart strings while informing the intellect.”

It doesn’t get more adorable than Bei Bei. What’s not to love about the cutest panda on the planet? As if the photograph on the cover weren’t enough, Bei Bei becomes even more endearing throughout the book as we get to know his incredible story and his panda personality.

Bei Bei Goes Home tracks the life of one miraculous baby panda in the collaborative panda conservation program between the Smithsonian National Zoo and the People’s Republic of China. In 1972, China gifted a pair of pandas to the United States to encourage closer ties between the two countries. Those pandas did not produce any offspring. It was then that a breeding program was launched. Since then, several pandas have been born at the Smithsonian Zoo.

Bei Bei (pronounced “bay bay”) means “precious treasure” in Mandarin. He joined a healthy family with older siblings in August 2015. His mother, Mei Xiang (pronounced “may-SHONG”), had a boy cub in the zoo in 2005 and a girl cub in 2013. The 40-year-long panda conservation program has been so successful that as of 2016 the panda census listed 1800 pandas in the wild —nearly double the count in the 1980s. Giant pandas are no longer considered endangered, but they are still in the vulnerable category and in need of protection.

In family scrapbook-photo-album-style, we track Bei Bei’s birth, care, feeding, and growth milestones. Along with abundant full color photographs, Bardoe has included sidebar cutouts listing facts about pandas on each page spread. We learn, first and foremost, that giant panda pregnancies last from three to six months and it is incredibly difficult to tell if a female is pregnant. Even if a fetus is detecting on an ultrasound, there is no guarantee that it will develop into a live birth.

Born at just 5 1/3 ounces, Bei Bei is 700 times smaller than his mother who weighs 245 pounds. “That would be like a human newborn having a mother the size of an elephant.” Bei Bei looks more like a baby mole of indistinct gender than a roly-poly panda. Bei Bei actually had a twin, which is common for pandas, but the mother usually can focus on only one cub to nurse and rear. Bei Bei’s twin died after four days despite round-the-clock volunteer efforts to save it. Bei Bei spends all day nursing and snuggling and is triple the size in three weeks.

As an instant celebrity, Bei Bei’s arrival attracts 500,000 visits to his website in the first week of life. He receives cards and letters from all over the world. Pandas in zoos are considered China ambassadors because China is the only country in the world where they live in the wild. Even the first ladies, Michelle Obama and Peng Liyuan, get in on the action by hosting a cub-naming ceremony at the Smithsonian Zoo.

Along with all of this fascinating information, pictures don’t hold anything back. We see Bei Bei’s first vet visit, his first excursion out of the den, his first munch on a bamboo sprig. We watch Mei Xiang help Bei Bei climb down from a tree (climbing up is easy!). Of course, we wouldn’t want to miss Bei Bei’s first birthday party and his Zhuazhou ceremony where he picks a word that will represent his future. Bei Bei’s symbol is luck and friendship.

After four years of learning how to be a panda, it is time for Bei Bei to go “home” to China, even though it’s a home he never knew. The remainder of his story describes how this program works, how the travel happens (he travels in a large FedEx cargo plane) and why this relocation is deemed necessary. Bei Bei’s true mission is to help get pandas back in the wild. In the meantime, zookeepers are watching Mei Xiang closely for signs she is ready to mate again.

One might think it harsh and unjust to separate the panda family. The matter-of-fact style of this family photo album presents pandas as solitary animals. They don’t run in packs like many other animals. The fathers don’t participate in child raising duties, and the mothers will ignore the cubs once they are self-sufficient. This family will thrive by participating in programs on opposite sides of the world of each other and are integral to the save-the-panda campaign.

As much a panda story as a panda program story, Bei Bei Goes Home tugs at the heart strings while informing the intellect.