Behave: The Biology of Humans at Our Best and Worst 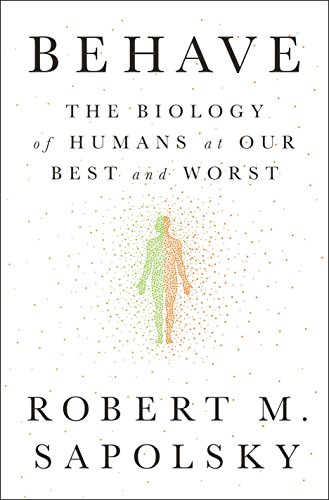 Behave: The Biology of Humans at Our Best and Worst by neuroendocrinologist Dr. Robert M. Sapolsky is a really long book at 800 pages. It is something truly impressive: a single attempt to comprehensively document the totality of scientific knowledge of human behavior at this point in history. When viewed from this perspective, 800 pages suddenly seems inadequate.

Dr. Sapolsky’s central question in Behave is why we humans are sometimes nice to each other but at other times nasty. To answer this question, he synthesizes a career’s worth of knowledge gleaned from dozens of different scientific fields, creating a product that is a tour de force, beginning in the center of the human brain and ending with a macroscopic view of the history of the human species.

The first two-thirds of the book is organized chronologically, but looking backward. Starting with “one second before,” Sapolsky summarizes a wealth of neuroscience research to explain what our brains do that results in a particular behavior a split second later.

The perspective then zooms out a little to discuss things like the effect of stress, risk-taking in adolescence, childhood bullying, parental involvement, socioeconomic context, etc.

Another step out: What happened in the womb between conception and birth that shapes how we behave today? Even further back: What is the effect of culture and evolutionary biology on behavior, including empathy and compassion? Where does our intense tribalism come from? Why do we organize ourselves into hierarchies? Why are we so submissive to authority? Why do metaphors, symbols, and stories have such power to motivate human behavior? (And this is all just scratching the surface.)

The last third of the book focuses on the practical application of all this knowledge. Given what we know about the origins of human behavior, how does this affect our understanding of the criminal justice system? Of humanity’s attempts to work toward peace in a world of conflict? Of the intensely tribal nature of our contemporary political environment? Of whether or not humans have “free will”?

While the author is an academic neuroendocrinologist by training, he goes to great lengths to make sure that his prose is accessible to a wide audience. It is not assumed that the reader knows the difference between the sympathetic and parasympathetic nervous system, for instance, and these concepts are mercifully explained in layman’s terms.

The technical details of the various scientific studies are described in a way that sometimes read like a mystery novel. Knowing that he is asking the readers’ indulgence on this 800-page adventure, he peppers the narrative with humor, self-effacing anecdotes, and light-heartedness. Example: We learn something about what it’s like to shoot tranquilizer darts into monkey butts in the name of Science.

Readers who are less interested in the details and want more of the “take home” points can skip much of the technical discussion, and the author is kind enough to provide a summary at the end of each chapter of the main points. Those looking for information on specific topics can easily read chapters on a stand-alone basis.

That all said, one should not assume that the author sacrifices depth for accessibility. The research presented in each chapter is meticulously referenced and there are 40 pages of appendices for those interested in even more detail on neuroscience and endocrinology.

There are hundreds, if not thousands, of important applications that can be made from the research that Sapolsky presents in Behavior. For example: For millennia, political philosophers have argued about human nature and its implications for political organization. Liberals like John Locke and Thomas Hobbes assume that humans are self-interested and competitive by nature and so argue that government is necessary to prevent us from selfishly violating the rights of others. Socialists like Karl Marx argue instead that humans are naturally cooperative and caring but can easily become corrupted by coercive governments that promote competition and the concentration of wealth in the hands of the few, thus the government should prevent the extreme accumulation of capital by the bourgeoisie. Conservatives like Edmund Burke assume that imperfect humans might be well intentioned, but ultimately not as capable of pure, unbiased reason as liberals would like to think. Thus, according to Burke, we should change tradition only with caution and slow deliberation.

Who is right? According to Behave, they are all right to an extent. We are hardwired for the type self-interested, aggressive behaviors identified by liberals but also highly affected by context, culture, and environment, as argued by socialists. Our brains also engage in a constant struggle between the amygdala and the prefrontal cortex, between the fear, anger, and anxiety that cloud our judgment (identified by conservatives) and thoughtful, constrained, and reasoned impulses (promoted by liberals).

In short, human behavior is complicated. We are products of both nature and nurture, evolution and environment, genetics and context. Behave does an admirable job of bringing as much of it as possible all under one roof while making applications to a wide range of human experience.