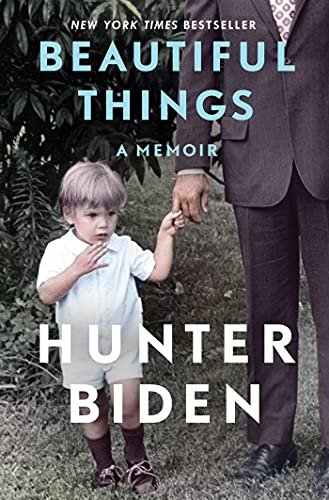 “Hunter spares no details about any aspect of his life, so that we feel his cautious optimism when he enters yet another rehab or recovery program and crash with him when he inevitably begins using again.”

Beautiful Things, a book about finding light in darkness and hope in suffering is part family saga, eulogy, biography, and journey of addiction and recovery written by Hunter Biden, the younger son of U.S. President Joe Biden. As unbearably sad and heart-wrenching as the book often is, it is also funny, insightful, uplifting, and deeply engrossing. The memoir glides back and forth from childhood to present day. It moves from national and global politics to remembrances of a family’s triumphs and tragedies—and to Hunter’s downward spiral into drug addiction and uphill journey into recovery.

The book’s title is the mantra of Hunter’s older brother Beau, who had a way in childhood and adulthood of seeing only “beautiful things”—the best in people and in life. Hunter describes how these Irish twins used the term as their “code for a renewed outlook on life,” a way to avoid getting “too thrown off course by whatever blindsiding hurdle life threw in our way, to look, to see, to love.”

Recalling his childhood as almost idyllic—with sports, friends, hanging out, and doing odd jobs—the author’s fondest memories are of his adored big brother, large family, and feeling surrounded by their love. He writes that his dad “often said that Beau was his soul and I am his heart.” But along with enjoying abounding love, the Biden family also suffered terrible losses that they survived by reaching out and holding onto each other.

First was the car crash that killed two-year-old Hunter’s and three-year-old Beau’s mother and baby sister Naomi in 1972 when Joe Biden had just become Delaware’s junior U.S. Senator. Hunter suffered a severe skull fracture (the first of several serious head injuries which may have contributed to his succumbing to alcohol and drug use) and Beau a broken leg. Their physical injuries were nothing compared to the loss of “mommy” at such a tender age.

When Hunter was seven, his father married Jill Biden who “did an amazing job of taking over the role” of mother. The boys called their birth mother “Mommy” and their stepmother “Mom.” The author has nothing but raves for Mom and speaks of her lovingly throughout the book.

A second major crisis occurred when Hunter was 18 and his father had a life-threatening aneurism followed by a pulmonary embolism and surgery. Although things were touch and go in the hospital, Joe Biden eventually recovered his health and family life returned to normal. Shortly after that, however, Hunter, who had started drinking and drugging, got busted for cocaine possession.

He relates how he met his first wife Kathleen while working in a Jesuit volunteer house in Portland, and marvels at his happiness at becoming the father of three daughters. To support his family he went from Georgetown University to Yale Law School, although his first choice would have been to study creative writing. Eventually, the marriage broke up due to his self-destructive drinking and drugging in spite of numerous attempts to remain clean and sober.

In order to understand how far from the top of the mountain Hunter tumbled down, he reminds readers that in spite of his addictions and during periods of recovery, he was a hard-working, respected lawyer who had served “on numerous corporate and nonprofit boards, including as vice chairman of Amtrak and chairman of the board of the World Food Program USA.”

The book is steeped in political history and Hunter’s personal anecdotes about it, including how he began writing his life story during what he calls the “Orwellian political climate” of Donald Trump’s presidency and the Republican attack on his reputation for influence peddling when he was on the board of Burisma Holdings, a Ukrainian company producing natural gas. Setting the record straight by accusing his accusers of scapegoating him, Hunter maintains the legitimacy of his role as a Burisma board member. However, he admits that with hindsight he would not have taken the seat because it opened him up to exactly the kind of full-frontal assault he ended up defending himself against.

Luckily for the reader, Hunter, a writer at heart, kept journals of the ups and downs of his addiction journey. He started drinking at 14 and gradually graduated from alcohol to drugs. Baring his soul, he admits, “I’ve always felt alone in a crowd” and talks openly and achingly about trying to fill the hole of losing his mother at such a young age.

He notes that the loss was retriggered over and over: when Beau went away to college, joined the military, and was deployed to Iraq, and when he was diagnosed with brain cancer and eventually died. Hunter writes candidly about how the loss of his beloved brother affected him. While he does not blame his relapsing on his loss of Beau, he sees it as a contributing factor to becoming a “crack addict, alcoholic, tabloid mainstay, [and] political punching bag.”

Much of the book is spent chronicling Hunter’s numerous rehab attempts and failure to remain permanently clean and sober, although he managed to do so for years at a time. He presents two Hunters: one who was a brilliant, energetic family man who functioned exceptionally well professionally and one who literally could not make it through a business meeting without having a drink or sneaking off for a hit of crack cocaine.

Hunter spares no details about any aspect of his life, so that we feel his cautious optimism when he enters yet another rehab or recovery program and crash with him when he inevitably begins using again. Although his father, Mom, and relatives reached out to and stood by him throughout his decades of chemical dependence, it wasn’t until he met Melissa, a friend of a friend who later became his second wife, that he was able to overcome it.

Today, living in California, he is the proud father of a son, aptly named Beau, and is enjoying writing and painting which he says keeps him “grounded.” He credits the love and cherished memories of his brother with getting him to where he is today by giving him hope, making him feel less alone, and being a light during the darkest periods of his life.