The Bear Who Wasn't There: And the Fabulous Forest 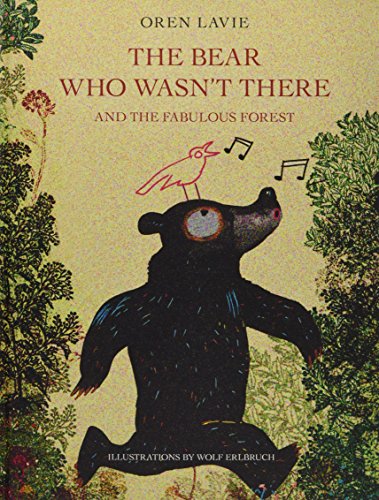 The Bear Who Wasn’t There is the product of a collaboration between multitalented musician, playwright, director, and author, Owen Lavie, and Wolf Erlbruch, one of Germany’s most renowned illustrators. The result is a quirky and charming existential quest featuring a bear who finds himself wondering if he is himself.

There are clues. Bear finds a slip of paper in his pocket with three hints: 1) I am a very nice bear; 2) I am a happy bear; and 3) very handsome, too. And with this unusual map, he sets off through the Fabulous Forest.

Bear will remind many of Pooh in that his good-natured innocence spurs profound speculations. (“And he wondered whether it was better to be first or last when you were all alone”/“Flowers are more beautiful than they are thirty-eight.”) But this is Pooh in Wonderland—or having passed through the Phantom Tollbooth, as we see when he meets the Convenience Cow, the Lazy Lizard, and the Penultimate Penguin and engages in debates over things like whether thinking about everything includes thinking about nothing.

With the help of these fellow forest-dwellers, Bear decides that the first two clues accurately describe him. Ultimately, he finds his way home and to his mirror, which seals the deal: He is himself.

Young readers with a philosophical nature and an appreciation for provocative silliness will be especially gratified by Bear’s self-discovery. However, the book’s depth, combined with its text-heaviness, suggests that it will appeal more to the older kids in the 4–8 target audience.

Erlbruch’s illustrations, which look like etchings, fit the story well. The Fabulous Forest effectively evokes a fairy tale feel, and Bear, a portly fellow with huge eyes, a bright red mouth, and colorful flecks in his black fur, is loveable at first sight.

The Bear Who Wasn’t There isn’t as delightful as Winnie-the-Pooh, as fantastical as Alice in Wonderland, or as funny as The Phantom Tollbooth, but it should nonetheless please its readers. Here’s to hoping they won’t have to go searching for it.