Be Still My Soul: A Novel (The Cadence of Grace) 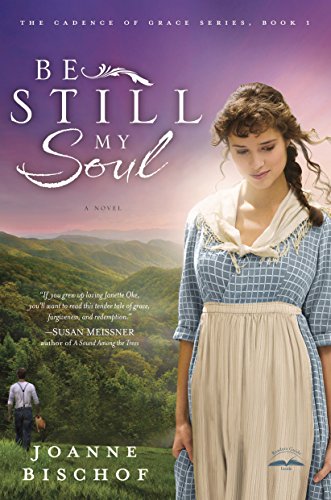 “Be Still My Soul is proof that faith can indeed foster love and trust—but in God’s own time.”

Seventeen-year-old Lonnie Sawyer is forced by her gruff, abusive father, Joel, to take her mother’s place at the Rocky Knob country summer songfest. Joel lies about her mother’s “headache,” covering up his jealousy over her singing for Samson Brown.

Lonnie sings with a banjo, mandolin and fiddle backing her up as the crowd dances, claps and cheers while she counts the minutes until her ordeal is over.

She meets up with her aunt and best friend, Sarah, and decides to stay awhile after her father leaves, promising to walk home with her brother, Oliver. Her brother has other ideas and passes her off to bluegrass musician, Gideon O’Riley, who has hopes of hitting on all the pretty girls this night. His reputation makes mothers want to lock their daughters away and fathers to load their shotguns.

To Lonnie, Gideon is a perfect gentleman . . . and one who stirs new sensations within her. She agrees to kiss him for accompanying her on the long walk home, arousing Gideon into pressing further until Lonnie socks him in his jaw. Her night is ruined by feelings of sin and violation.

Little does she know they are being watched.

The next morning, Joel accuses her of being with Gideon, knocks her around, and calls her soiled. Joel quickly arranges for a meeting with Gideon’s father, and in spite of protests on the part of both defendants, a marriage deal is made—pleasing no one but Joel.

The wedding is over quickly—no one saves her, not even her God. This is certainly not the wedding Lonnie had dreamed of.

Living in Gideon’s home might have been bearable if his mother weren’t so hostile toward Lonnie. After a short time they pack up and head for the town of Stuart to look for work. Their marriage has been consummated, bringing no satisfaction to either of them.

It’s a long walk and Lonnie is surprised at how hard it is to keep up with Gideon, who presses on relentlessly. He makes it plain by his silence just how he feels about this forced marriage. He forces Lonnie beyond her endurance to keep up in the rain and mud, once causing her to bang her head on his boot as she grabs onto his leg, too tired to go on.

A clunk on the back of Gideon’s head introduces Jebediah to him. Jeb threatens to shoot Gid and takes them to his large home at the foot of the mountain. The couple stays with Elsie and Jeb, an older couple, which pleases Lonnie who has never lived in such a loving home. Jeb works Gid hard to teach him some life lessons, but Gideon is young and needs a lot more teaching to be worthy of Lonnie and the baby she’s about to have in about eight months.

Debut novelist Joanne Bischof weaves a bittersweet tale of life in the Blue Ridge Mountains of Virginia. She has a lovely style of writing and uses wonderful metaphors.

Poverty is rife, but the spirit of the people and their trust in God drives them to strive for happiness in a land both beautiful and cruel. Will it be possible for this young couple to find love in spite of distrust? Can Gideon give up his dreams and settle down? Will Lonnie be able to forgive him?

The author neglects to connect some of the loose ends in this story. Perhaps she does this to entice readers to follow this story in her next Blue Ridge Mountain story, Though My Heart Is Torn.

Be Still My Soul is proof that faith can indeed foster love and trust—but in God’s own time.