Battle for Skyline Ridge: The CIA Secret War in Laos 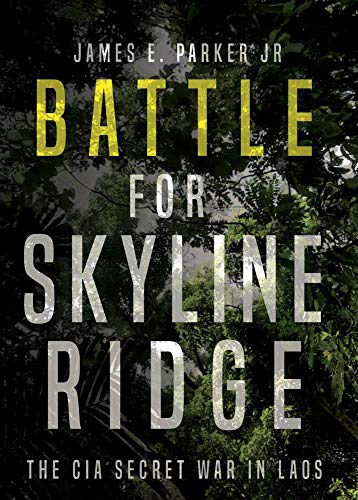 American involvement in Southeast Asia was bigger than Vietnam. Indeed, US forces were spread out between South Vietnam, Cambodia, and Laos. In the latter theater of war, CIA paramilitary officer James E. Parker, Jr. served alongside a handful of battle-tested Americans, Hmong militiamen, and Thai irregulars. In 1972, this small anti-communist army, headed by the brave and brilliant Hmong general Vang Pao, managed to defeat 20,000 North Vietnamese Army soldiers despite the NVA’s superiority in numbers, tanks, rockets, and artillery.

Battle for Skyline Ridge recounts this incredible battle and so much more. Surprisingly, despite the fact that he was there during the apocalyptic battle, Parker’s book rarely ever dips into first-person narration. Instead, a majority of this book is drawn from after action reports (both American and North Vietnamese), books written by other CIA veterans, and government cables.

As such, Battle for Skyline Ridge presents a sweeping account of the “secret war” in Laos, from the beginning in 1961 until the ceasefire in 1973. This book is perfect for anyone interested in both the battle for Skyline Ridge itself and the mechanics of how a small band of CIA officers helped to form Vang Pao’s private army.

The biggest weakness in this book is the author’s decision to quote pages of entire after-action reports and memoirs. In particular, Chapter 16 quotes ten pages of NVA Colonel Nguyen Choung’s report detailing the planning of Campaign 74B, which the NVA leadership in Hanoi had designed in order to knock Vang Pao and his American and Thai allies from the mountains near Dien Bien Phu. While the colonel’s words present an important view of the battle, ten pages of his words (which is in a smaller font, mind you) is too much.

Battle for Skyline Ridge is also bogged down with military jargon and acronyms galore. This is a book for serious students of military history and battlefield tactics. For such students, Parker’s work should be read as it tells a good story while also providing beaucoup details about the Air American planes that provided ammo and transport during the battle; the US Air Force pilots and planes that decimated entire NVA brigades; and the on-the-ground decisions made by American, Hmong, and Thai officers.

The book also provides tidbits of insight into why the French lost their war in Indochina and why the US did so, too. The first half of the book describes the latter days of French colonialism in Laos and Vietnam, and how the French were forced to cut their losses after the communist victory at the Battle of Dien Bien Phu in 1954.

When the US took charge of anti-communist efforts in Southeast Asia, Parker notes that they unwittingly lost the war by 1962 with the signature of the Geneva Accords, which officially declared the Kingdom of Laos neutral. The US subsequently pulled out its troops; the NVA did not and would continue to use southern Laos as the starting point of the infamous Ho Chi Minh Trail.

There is more than a touch of tragedy in Battle for Skyline Ridge. American diplomats and rear-echelon types began bungling the war at the beginning. Averill Harriman, President Kennedy’s ambassador-at-large, would turn off his hearing aid when he met with CIA officer William Colby, one of Washington’s men in charge of Laos.

President Lyndon Johnson’s administration took the bad advice of Kennedy’s former staff (who had earlier turned a deaf ear to Eisenhower); the US military juggernaut in Saigon micro-managed everything and wasted money; and William H. Sullivan, the diplomat in charge of Laos, got everything wrong (Sullivan would later tell President Carter to give Iran over to the mullahs).

Battle for Skyline Ridge condemns the white-collar agents of the CIA and Washington while heaping praise upon Vang Pao’s army. “The Vietnamese military never defeated the CIA’s Asian army defending Laos,” Parkers writes, “the CIA provided the necessary leadership and paramilitary support to the local forces to hold off the very determined communist invaders.” This is a fitting tribute, but also an epitaph for the war in Laos, which should have served as the blueprint for the war next door.