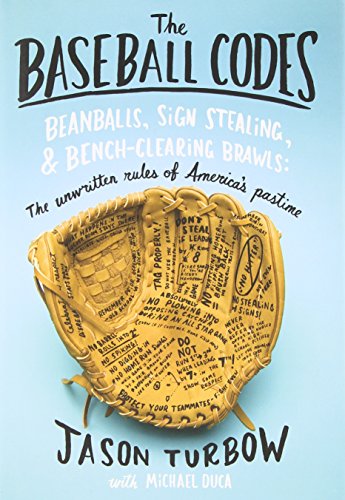 This book will help you understand seemingly inexplicable events that occur in baseball games. Why, for example, does a pitcher try to intimidate a batter by deliberately throwing at his head? The authors offer several answers at different places in the book, for example: the batter was unlucky enough to follow a hitter who hit a home run. Or it could be to disrupt team rhythm and force hitters to pay more attention. It might be the result of the opposing team’s pitcher having hit a batter in the previous inning. The act could even be caused by a feud the pitcher and batter had three years ago in the minors! Unless you are part of the team yourself, you’ll never know for sure. As one catcher commented in this book, “Teammate bond is stronger than logic.”

This testosterone-fueled rivalry between hitter and pitcher is at the heart of much of the Code and what it governs. Another aspect of the Code appears to be a throwback to the tension between the Old Boys and the Greenies, for the veterans on a team sometimes show the rookies who’s boss. (Gotta teach these kids respect.) When young, inexperienced players break the Code, especially if they fail to retaliate for a presumed slight to the team, they may be severely reprimanded. These young fellows are made to feel terrible about their lapses in understanding the Code. So if you still think “there’s no crying in baseball,” you’ll discover otherwise in this book.

The Code includes a section demanding that players protect their teammates from exposure of their bad behavior (staying out past curfew, drinking, womanizing, fighting with teammates, taking forbidden pills). The authors declare that the primary Code rule is “Keep your mouth shut.” The players must have felt deeply angry about the books of Jim Bouton (1970) and even the diary of Jim Brosnan (1960), both of which certainly smashed to bits the Code of their day by revealing just about everything that happened on a team.

According to Turbow and Duca, the Code demands respect for opponents as well as teammates. The operative rule can be summarized as “Don’t show up the other team.” Players must not, for example, play aggressively with a big lead—no base-stealing, no hit-and-run, no swinging at a 3-0 pitch. Do most fans realize that players deliberately avoid playing their best at all times, out of regard for their opponents’ feelings? This aspect of the Code seems to contradict the evidence of players’ willingness to resort to cheating in order to win. But it also made me think of the way the game was played in the amateur days of baseball of the 1850s, when the pitcher was required to throw the ball where the batter had a fair chance of hitting it and could not resort to any “sneaky” pitches.

Today, sneaky is okay. Sign-stealing, for example, although it might be detected, is allowable until revealed, and so is applying “foreign substances” to the ball. If caught, the cheater has to stop, but that doesn’t keep players from continuing to try other forms of trickery. They also engage in what could be called downright meanness, not only deliberately hitting batters with the ball but also trying to hurt basemen: runners crash unnecessarily hard into a player defending a base, even using their forearms as weapons. Spiking attempts occur, too. Evidently, the Code puts its imprimatur on these acts.

Nobody objects, either, to the machinations of groundskeepers in their efforts to alter the diamond to create a home-field advantage. Am I the only one who believes their work should be curbed? I can’t understand why so many newspaper reporters write admiringly (instead of critically) about groundskeepers’ alterations to favor the home team’s strengths. Why can’t the topography of the diamond be as well controlled as the measurements?

But of course the measurements may mean little, too. The authors of The Baseball Codes (sometimes treated as plural, sometimes singular) reveal that some pitchers and batters cheat by assuming illegal positions in relation to mound or plate.

One of the Code rules that spectators can easily figure out for themselves is that whenever there’s a fight on the field, everybody leaves the bench in support of his teammate. And most fans have heard of the Code rule that requires players not to mention a no-hitter or perfect game in progress. Those acts seem thoughtful. But the rest of the Code has nothing to do with requiring thoughtful, or even ethical, behavior of a player. Quite the contrary.

Toward the end of the book the authors begin to adopt a cynical attitude toward the actions of today’s players. They quote commentators who point out that the players see themselves as putting on a show for fans and are more interested in the money they pull in than that they are in doing their best, whereas traditional fans believe that a baseball game should be much more than that. I think that by this point in the book, all the negative information about baseball players that the authors have communicated during their story finally began to affect their style. Earlier in the book they seemed able to stick to explication of players’ behavior without commenting on it; later, they began to think of the Code’s possible negative effects on baseball: maybe this Code isn’t the best thing for the national game.

It was inevitable, wasn’t it, guys? You finally began to realize that today’s players aren’t just colorful or quirky; they are determined to win no matter how they do it, even if it’s by deception and outright cheating. The unsavory evidence the authors present in The Baseball Codes is overwhelming.

The unattractive “cheat to win” attitude of players places them only one step away from being open to game fixing. Let’s hope that those charged with upholding the probity of the national pastime remain vigilant, and that they perform better for the fans and for baseball than they managed to do in the steroid scandal.

We should be thankful for the good work of Turbow and Duca, who have done a prodigious amount of research, interviewing a lot of players and looking up the words and opinions of a great many others. Moreover, these authors are good writers, presenting their information in clear and straightforward prose without descending to sportswriter jargon. I only wish they had more positive news for us. Say it ain’t so, Jason and Michael.