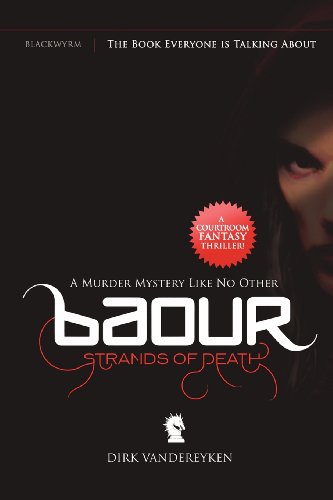 It takes supreme confidence in one’s ability to put on the cover: “The book everyone is talking about.” Not to mention Dirk Vandereyken is shown sticking out his tongue in his author photo. Does Baour: Strands of Death live up to its own hype? It delivers as a fascinating look at mind manipulation in a sci-fi courtroom setting.

Baour (picture the actor Jason Isaacs in all his glory as Lucius Malfoy in the Harry Potter series) is a necromancer, a sorcerer who conjures the dead in order to predict the future. He makes a splash when he enters the tiny hamlet of Barnsby—taking up residence with the local witch, ordering expensive fabrics from the tailor, and spending time in the woods with young boys.

Baour is brought to trial when the innkeeper accuses him of communing with a dead man, who was infected with the mysterious disease plaguing the town. Those in authority are the temple priests. They claim to have the Sight: the ability to see and manipulate the strands of power that emanate from an all-knowing spider. The strands encircling those with the disease are thick, black, oily. Baour can see these strands as can his new apprentice, Matthayas.

Matthayas is a 16-year-old local boy whose younger brother was saved by Baour from a monster attack. Baour brought back what little life was left in the boy, who was already infected with the disease. This earns him the undying loyalty of Matthayas who discovers under Baour’s tutelage that he also has the Sight.

Five witnesses take the stand during the trial: a witch, a tailor, a innkeeper, a priest, and Matthayas. The chapters are divided into testimony followed by Baour’s cross-examination. This is an excellent way to tell a story, and Vandereyken is like the spider weaving all of the threads together to form a powerful conclusion. Like most science fiction writers, he creates an entire society, but he is able to immerse readers without losing them in an avalanche of details. He provides just enough signposts to guide the way into the customs of Barnsby.

Baour is arrogant in his precision at playing a crowd. He knows what buttons to push to elicit the reaction he desires. He is always one step ahead—of the priests, of the witnesses, of his supposed allies. His ultimate goal is to illuminate the fact that while gods exist who hold supreme power, the priests who wield that influence are not beyond reproach.

Overall, the creation of this master manipulator is brought to life through the skill of a truly talented writer.