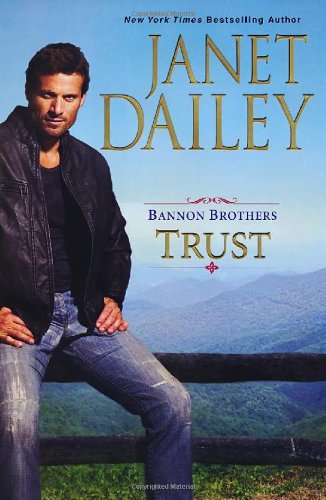 “. . . the uneven pacing, major plot holes, and missing depth of character renders this an ultimately bland read without the building suspense generally expected from this author.”

Janet Dailey’s new romantic suspense has a suspended cop, a dirty cop, a prison-hardened ex-cop, a reclusive artist, a social giant on the verge of collapse, a money-hungry socialite, a 30-year-old mystery, a kidnapping, and any number of secrets about to pop out of the various closets they’ve been stuffed into.

Yet, the uneven pacing, major plot holes, and missing depth of character renders this an ultimately bland read without the building suspense generally expected from this author.

Trust begins as RJ Bannon, the oldest of the Bannon brothers, drives away after opening up the family cabin deep in the mountains. While a remote cabin that very few people know about may have been useful in many ways during the course of the novel, it is never mentioned again. During the drive back to civilization, he ponders his career-pausing injuries at the hands of a drug dealer.

Bannon is an undercover cop, and he’s itching to get back to work; however, between his pain and the antagonism between him and the chief, laying low for the moment seems the best thing to do.

But that doesn’t stop him from snooping around with a colleague and coming across a child abduction case that’s about to be declared cold. It’s over 20 years old and there have been no leads for more than a decade, but (and here is the first leap over logic for the reader) Bannon is not only immediately intrigued, but also assumes that all other investigating officers were somehow inadequate at best, dirty at worst. It turns out eventually that he’s right—there is some questionable behavior around this case – but that doesn’t come to light until after Bannon picks up the case.

Coincidentally, after learning of the case, Bannon wanders off to a local art exhibit and just happens to meets Erin, an out-of-town artist who just happens to be in her mid-twenties, and who just happened to grow up in very isolated circumstances with parents who have no baby pictures of her.

This is right around the time when all hopes of suspense building are dashed.

The plot is well-detailed, and the many different strands are complicated enough to hold interest, but the holes only get more evident as pages are turned, and the end leaves a number of very important questions unanswered. For example, readers never learn:

• why the Montgomery baby was kidnapped

• who did the kidnapping and how they managed it

• why Bannon was interested in the case in the first place

• why his boss hates him so much

• as well as myriad other, more minor considerations.

What is most disappointing however, is the lack of depth and anticipation in Erin and Bannon’s relationship. The two are apparently so passionate about each other that they can barely handle being in the same room, but readers will have to rely on being told that, as it is hardly evident in their actions or reactions to each other. Occasionally they share embraces, but Erin seems to be running away as fast as she can, and Bannon is more passionate about the case than her. The eventual declarations of love seem almost out-of-the-blue when the main characters have acted more like siblings than lovers.

Unfortunately romantic suspense fans will not get the chills or thrills they are searching for in this dull, colorless read.