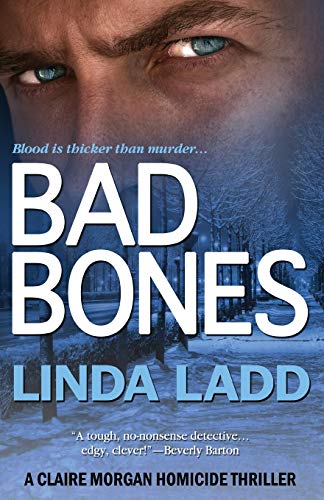 When a body is discovered at the bottom of a cliff in a Missouri State Park, detective Claire Morgan and her partner are sent to investigate. That wouldn’t be so bad, but it’s the middle of the worst winter in quite some time.

“. . . that was just great, just about as hunky-dory as it gets. Climbing around on straight-ho-the-bottom craggy cliffs the day after an ice storm was just what they needed to end their otherwise hellish day on the job.”

The body, they discover is that of Paulie Parker, a champion cage fighter.

According to the manager of the local fighting arena, Paulie was liked by everyone, and no one would’ve wanted to kill him.

“‘. . . They get along just fine, I’m telling you. They’re all fierce competitors, but they’re great friends outside the ring. They’re all buds. All my assets like each other. You ain’t gonna find any killers in my stable.’”

A very bad feeling began to take shape inside Claire’s gut, sorta like the first twinge of nausea that heralded a horrendous three-day stomach flu.

‘Ivan Petrov. I suspect you’ve heard of him?’”

Now the purported godfather of the East St. Louis mob has been pulled into the case. Since an accusation is made, Claire has to follow up. With her fiancé, psychiatrist Nick Black, Claire travels to St. Louis where she’s hoping Nick can help her get in to see Petrov.

“. . . Black had never mentioned any mobsters/personal friends that he knew in the St Louis metropolitan area, but on the other hand, he didn’t discuss his secret association with bad guys at all.” In fact, Black has disassociated himself from his family completely, especially now that he’s engaged to a police officer—even making a name-change—and he isn’t happy about Claire wanting to interrogate Petrov.

Soon, there’s another lead distracting Claire from the Russian. It seems Paulie was raised in an atmosphere of violence and death.

“‘ . . . It happened at a farm where he was born. His brother and daddy and lots of men fight up there. Just for the fun of it.  . . . some of them are jealous. And some of them are cretins, animals, savage and stupid and obsessed with beating on people.’”

This is confirmed by others who knew Paulie.

What follows is a maelstrom of long-term child abuse, childhood love ironically gone bad, and a family feud coming full-circle with a homicidal maniac or two thrown in, plus a severe case of fratricide and assumed identity, ending on a dead-end blizzard-whipped cliff.

Bad Bones has as its backdrop a chilling foray into the world of cage fighting and the extremes to which it can be taken. Paulie Parker’s journey is told in detailed flashback, through cruelty and brutality that can end only one way. This is an exciting entry in the Claire Morgan mystery series.